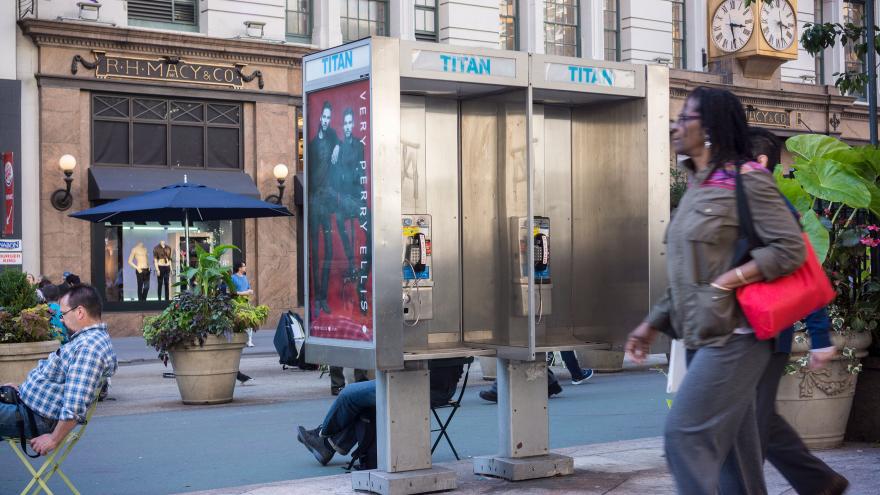 A pay phone in midtown Manhattan in New York on Monday, October 6, 2014. Thousands of payphone kiosks in New York are slated to become WiFi hubs with 500 planned to be live by July 2017.

(CNN) -- New York City's once-ubiquitous street pay phones may soon be a thing of the past.

A spokesperson for New York City Council Speaker Corey Johnson's office told CNN about 30 pay phones are expected to be removed by the end of March, with Johnson himself saying they would start in Hell's Kitchen.

"The antiquated and outdated pay phone booths take up much-needed sidewalk space," Johnson said in a statement to CNN. "Removing these booths is a win for pedestrians who navigate these crowded blocks. I want to thank the local residents who partnered with us on this and the Department of Information, Technology and Telecommunications for working with my office to address this issue."

Although the archetype of a phone on a hook will disappear from most of the city, LinkNYC kiosks provide users across the city the ability to make free calls to anyone in the United States.

The kiosks, which are being deployed across the city and primarily provide free public WiFi, also take up less space than payphones, offer complimentary USB charging ports and are compliant with the Americans with Disabilities Act, according to LinkNYC's website.

The top of LinkNYC's initiatives page even has a subheading that reads, "Say Goodbye to the Payphone."

CityBridge, the operator of the LinkNYC kiosks, will eventually remove New York City's 3,000 remaining pay phones across five boroughs, according to spokesman Dan Levitan. He did not have a timetable for how long it would take for those phones to be removed, but said that some may be replaced by LinkNYC kiosks.

New York City's four extant phone booths, all of which are on the Upper West Side, will remain and offer free phone service, Levitan said, just as the LinkNYC kiosks do.

The demise of pay phones is an unsurprising result of cell phones in 95% of Americans' pocket, according to Pew Research. The country's largest carriers have all sold the last of their phones to independent providers, according to previous CNN reporting. Sprint left in 2006. AT&T exited two years later. And Verizon got out in 2011.

Pay phone providers reported $286 million in revenue in 2015, according to an FCC report. They can still be profitable, particularly in places where there isn't cell phone or land line coverage, Tom Keane, president of Pacific Telemanagement Services, said in 2018.

"We have phones in Yosemite Valley that are extremely busy when there's not snow on the ground," he said.

Carriers said they were spending more on rising audit costs than they were making by completing pay phone calls on their networks. The carriers now contract with third-party clearinghouses to keep track of the calls and serve as the middlemen between them and the providers.

Correction: An earlier version of this article misstated the services associated with four extant phone booths. They will not offer WiFi.