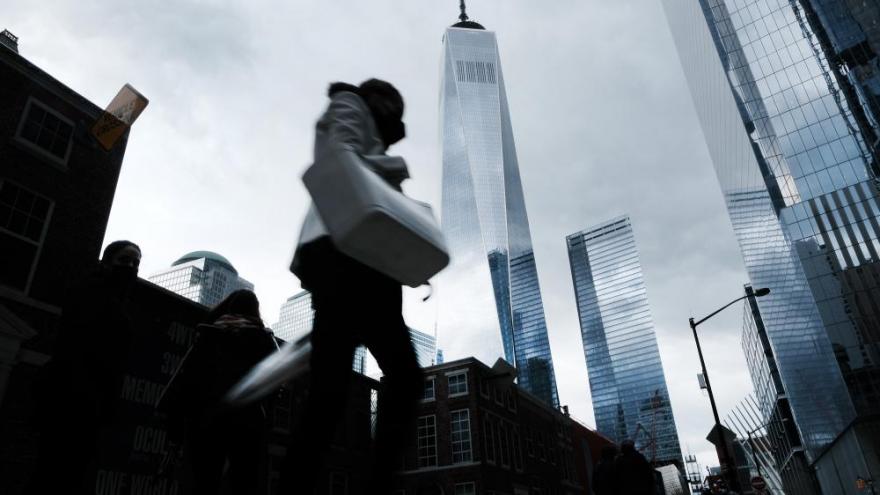 In an attempt to tackle pay inequality, New York City is the latest jurisdiction to require most employers to specify salary ranges for all job postings, and pictured, One World Trade Center, in Lower Manhattan on April 16, 2021.

(CNN) -- In an attempt to tackle pay inequality, New York City is the latest jurisdiction to require most employers to specify salary ranges for all job postings.

The mandate will go into effect in April and will apply to employers with more than four employees but excludes temporary hiring firms.

"Our new law shines a light on pay inequity," Helen Rosenthal, a former City Council member and sponsor of the bill, told CNN in a statement. "Including pay ranges in job postings allows job seekers to determine whether they will be able to support themselves and their family when they apply for a job."

Not posting the minimum and maximum salaries will be considered an "unlawful discriminatory practice" under the city's human rights law and may result in a fine of up to $125,000.

Beverly Neufeld, president of PowHer New York -- a nonprofit organization focused on economic equality for women that worked with Rosenthal on the legislation -- called it a "concrete step in eliminating the causes of wage inequality."

"This transformative law will minimize bias, maximize transparency, shift cultural norms and level the "paying" field," she said in a statement.

A version of this bill has been introduced in New York State Senate and other states have adopted similar measures. In 2019, Colorado became the first state to require the salary or hourly wage to be included in job postings.

The median salary for women was 18% lower than that of men in 2021, the equivalent of 82 cents on the dollar and a 1 cent increase on 2020, according to Payscale, a compensation data company. The study also found that when controlled for factors such as experience, industry and job level, women still make less even when they have the same employment characteristics: 98 cents for every dollar.

The salary-range legislation passed last month in the city council with a 41 to 7 vote. Mayor Eric Adams had until Friday midnight to veto the bill to prevent it from becoming law.

Republican council member Joe Borelli, the minority leader, voted against the bill and called it "an unnecessary interference" in a contract negotiation.

"This smacks as something someone who never has run a business would support," he told CNN affiliate NY1.