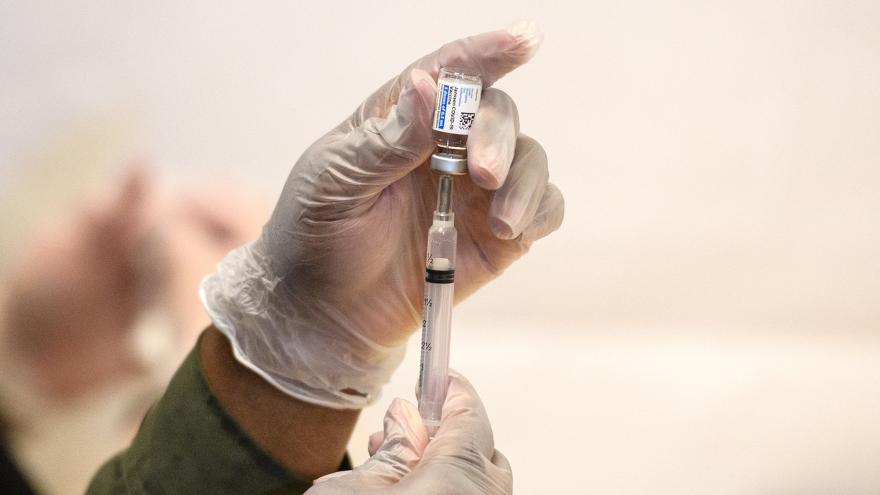 This new move, which de Blasio announced Monday on MSNBC, means everyone who works in the city will now be subject to a vaccine mandate.

"The more universal they are, the more likely employees will say okay, it's time. I'm going to do this. Because you can't jump from one industry to another or one company to another," de Blasio said. "It's something that needs to be universal to protect all of us."

At a press conference later on Monday, de Blasio said the vaccine mandate is the best way to avoid a return to a shutdown of businesses and other public events that other countries have ordered as Covid cases continue to rise.

Details about the how the rules will apply to businesses are due to be announced December 15, and de Blasio said the city will be holding discussions with businesses between now and then about those rules. The rules will not allow employees to opt out of vaccination through regular testing, as a proposed federal mandate for employers with 100 or more workers will do. And it will require workers to have at least one vaccination dose by the December 27 deadline.

The penalty that will be imposed on businesses that do not enforce the mandate were not disclosed.

"It is part of life that there have to be some consequences," de Blasio said. "We'll figure out what makes sense between now and December 15."

The mayor said that the overwhelming majority of businesses have complied with an earlier city rule requiring customers to show proof of vaccination, including at the city's restaurants, health clubs and entertainment venues. "It's been amazing, [there have been] very few times we actually had to penalize people," the mayor said.

De Blasio said the need for the new rules is a triple threat that is raising the potential for additional cases — the emergence of the Omicron variant, the coming of cold weather forcing people to congregate be inside more frequently, and the expectation of holiday gatherings in the weeks ahead.

The mandate itself will begin only four days before the end of de Blasio's eight-year term in office. He told reporters that he had spoken to Mayor-elect Eric Adams, who is currently traveling outside the country. Although he said he would not speak for Adams, he's confident that the new mayor wants to follow the advice of medical professionals and keep the vaccine mandate in place once he takes office.

"In every conversation we've had about fighting Covid, he's been really consistent on the point that he is feeling urgency, about these new threats, and that he understands my job is to keep New Yorkers safe until Dec. 31," he said. "I feel very, very good about the conversations we've had."

And he said that the medical professionals he has spoken to are united in the need to increase the rate of vaccination, and their belief that a vaccine mandate will work to do that.

Children, ages 5 - 11 in New York will now also be required to show proof of at least one shot before being allowed access to indoor dining, fitness or entertainment, the mayor announced.

Adults will now be required to show proof of two vaccinations for those areas.

The mayor is confident the mandates will hold up in court.

"Our health commissioner has put a series of mandates in place. They have won in court, state court, federal court every single time. And it's because they're universal and consistent. And they're about protecting the public right now from a clear and present danger," de Blasio said.

City employees were already subject to vaccine mandates. But a federal mandate for businesses with 100 or more employees to require vaccines or weekly testing of its employees is on hold due to court challenges. Many major employers, including some Wall Street banks and tech companies with offices in the city, have their own vaccine mandates in place.

"We had no heads up," Kathryn Wylde, president and CEO of the Partnership for New York City, an influential business group, told CNN Monday in a phone interview.

Wylde said she was "surprised" to learn about the new health restrictions through the media because typically local leaders would give the business community a heads up about such a shift.

"It's unclear if the city has authority to issue such a mandate," Wylde said, adding that the city business leaders are "very supportive" of vaccines.

Although New York employers are not against vaccine mandates, Wylde said business leaders are looking for more information on how this new order will be enforced and whether employees can opt out through testing. City workers already faced such a mandate.

"Employers do not want to be enforcement agents," Wylde said.

But the head of the Greater New York Chamber of Commerce praised the move.

"I don't think it's going to be an issue when it comes to private companies. Most of them are already vaccinated and require it," said Helena Natt, executive director of the Greater New York Chamber of Commerce.

Natt said the move by the city is a "next step" in what needs to be done.

Business leaders are also concerned about navigating the maze of federal, state and city health policies. For instance, unlike the city, New York State does not have a vaccine mandate for private employers. And the Biden administration's vaccine mandate for employers with 100 or more workers has been held up by court challenges.

Wylde said there is concern over a lack of coordination for federal, state and city health policies. "Public health protocols generally, and vaccine mandates, should be coordinated and consistent with each other," Wylde said.

But de Blasio said that the businesses he spoke to about Covid were supportive of a mandate.

"I've heard from so many business leaders, including in those sectors, like finance and tech, that the best thing for them is for government to lead the way," he said. "It's always better for the private sector if the government sets a single, universal standard, so they don't have to ... say to their employees, 'Hey, this is something we're going to do on our own.'"

He said what they really don't want to see is the kind of spike in cases that requires a shutdown or stay-at-home orders now being put in place in parts of Europe.

"Our health care leadership was adamant that this was a step we could and must take," he said. "We know from extensive conversations over months with private sector employers what their concerns are. The number one thing I've heard ... is that we must avert shutdowns."