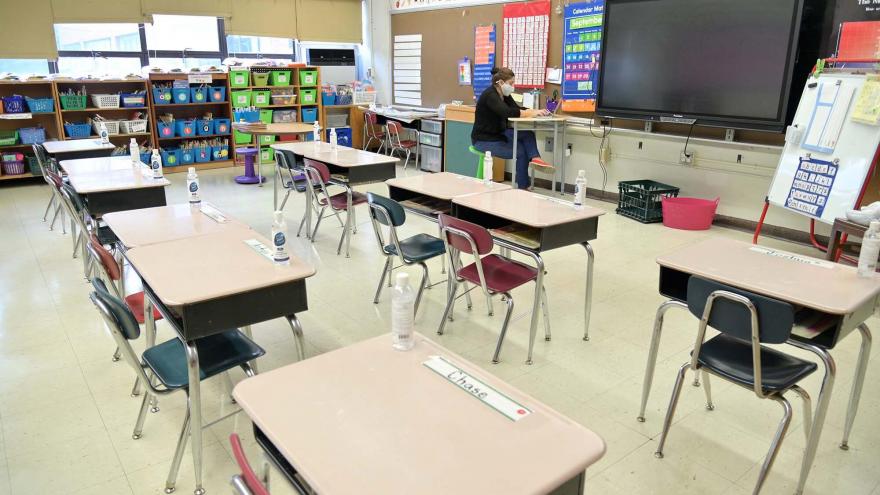 Jackie Sato teaches remotely from her classroom at P.S.124 in New York on September 24.

(CNN) -- New York City's public school system, the nation's largest, could shut down all classrooms as early as Monday in the midst of a growing second wave of coronavirus infections, officials said.

The decision signals a grim turnabout for a city that was an epicenter of the pandemic in late March and mirrors the move back to online learning of other schools districts around the country. NYC schools closed last spring and turned to all remote learning before reopening for in-person classes in September.

"We've faced these challenges before and are prepared for any situation that comes our way," New York City Schools Chancellor Richard Carranza wrote in a letter to principals on Friday. "New Yorkers have proven they are ready and willing to do the collective work to fight back this virus."

Carranza and Mayor Bill de Blasio said the school system's 1.1 million students and 75,000 teachers should prepare for a brief period of remote learning "out of an abundance of caution" as Covid-19 cases soar to alarming levels.

"And while no decision has been made about a system-wide transition to remote learning ... we must be prepared for every scenario," Carranza wrote.

De Blasio said Friday the coronavirus positivity rate in the city has reached 3.09%. Schools would be closed if it reached 3%, the mayor has said. But the city uses the overall seven-day rolling average of cases to gauge the safety of in-person learning, which is currently at 2.83% positivity.

"We set a high bar to bring our schools back," he said Friday on "The Brian Lehrer Show."

"We said we would only open if infection levels were low and if they went 3% on the seven-day rolling average, we would close the schools temporarily... If we get to that point then the goal is to bring them back as quickly as possible."

New York Gov. Andrew Cuomo on Friday acknowledged de Blasio's right to shutter schools at the 3% percent positivity rate but said he was open to a new statewide policy for keeping classrooms open. The state over the summer set a seven-day average positivity rate that exceeded 9 percent as the threshold for schools to close.

De Blasio said the city's seven-day rolling average for reported Covid-19 cases is at 916. Hospital admissions were at 121, while the positivity rate among those admissions is 28.8%.

The US saw a daily record of more than 153,000 new infections on Thursday.

In a statement, United Federation Teachers (UFT) President Michael Mulgrew said: "If we continue on this trend of growth of infections in the city, we're fully expecting that schools will have to close and all learning go remote until the infection rate goes down."

Mark Cannizzaro, president of the city's Council of School Supervisors and Administrators, said in a statement that if schools must close "it is essential that school leaders are informed as soon as possible and empowered to communicate with their communities in a timely manner so they can help them navigate through any uncertainty in the coming weeks."

New York students streamed back into classrooms with masks, temperature checks and containers of hand sanitizer in September. In October, the city launched a new program where 10 percent to 20 percent of student and staff at each school were tested randomly once a month. The reopening saw no massive outbreaks of coronavirus cases.

The possible shutdown of city classrooms would come a few days after the state ordered that gyms and businesses serving alcohol must close by 10 p.m. effective Friday. Indoor and outdoor gatherings in private homes in New York state will be limited to 10 people in an attempt to curb the spread of the virus.