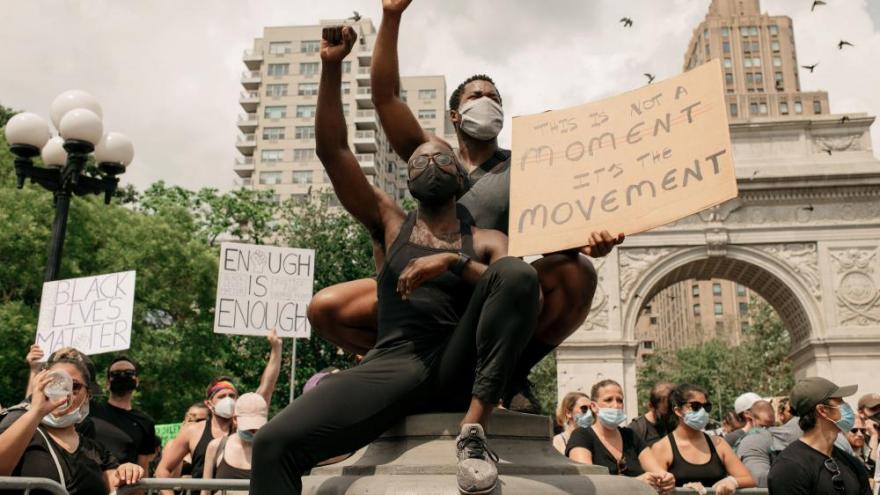 Demonstrators wear masks as they denounce systemic racism and the police killings of black Americans in Washington Square Park in the borough of Manhattan on June 6, 2020 in New York City.

(CNN) -- After 78 days of coronavirus stay-at-home orders and a death toll larger than all but six countries, New York City begins to reopen Monday.

Now, New York and cities across the country must reckon with a combination of coronavirus, vast unemployment and systemic racism -- a toxic trifecta that most deeply hurts black communities.

Once the epicenter of the pandemic as the largest and densest city in the US, New York City enters phase one of its reopening plan Monday, allowing nonessential workers in construction and manufacturing to go back to work and retail stores to set up curbside or in-store pickup.

"This is a triumphant moment for New Yorkers who fought back against the disease," Mayor Bill de Blasio said. "My message is to stick to it."

Still, hair salons, offices and indoor seating at bars and restaurants remain off-limits until the next reopening phase. And Broadway shows, museums and large cultural gatherings are still far off.

New York has come a long way since March.

In the state, more than 377,000 people contracted Covid-19 and over 30,000 died of it, the most among all states in both total numbers and per capita rates, according to data from Johns Hopkins University. More than 21,000 of those deaths, or about two-thirds, were in New York City.

The 78-day lockdown represents the longest in the country and comes weeks after other parts of the state hit the necessary criteria to reopen.

The reopening comes after the coronavirus wreaked devastation throughout the city, particularly in neighborhoods of black and brown people. Now, after months of stay-at-home orders, near-universal mask wearing and widespread testing availability, New York City will take its first step toward some semblance of normalcy.

"Look at what we did. Flatten the curve? Forget flatten the curve...we bent the curve," Gov. Andrew Cuomo said Sunday. "We are curve-benders, if there is such a thing."

In New York City, black/African-American people and Hispanic/Latino people have died of the coronavirus at double the rate of white people, according to city data.

"It's not a new pattern," he said. "It's just that Covid-19 has shone a bright light on a pattern that has existed for a long time, and we have not done as much as we could to make a difference."

Health experts have expressed concerns that crowded protests to fight racism -- a public health issue in itself -- may lead to a new increase in coronavirus cases.

"While everyone is concerned about the risk of Covid, there are risks with just being black in this country that almost outweigh that sometimes," said Dr. Abby Hussein, an infectious disease fellow at the University of Washington. "And the sad part is the group that is protesting for their rights are the same people who are already disproportionately affected by the disease."

More than 500 deaths a day at its peak

Cuomo ordered nonessential workers to stay home from work starting on March 22, as coronavirus cases were in the midst of a rapid, exponential growth that overwhelmed hospitals. But his and de Blasio's delayed actions came too late to prevent the sharp spike in cases in the densest and most populated city in America.

The surge meant patients were treated in hallways, nurses and doctors ran out of personal protective equipment, funeral homes ran out of space and field hospitals were set up in Central Park, the Javits Convention Center and aboard the USNS Comfort hospital ship.

At its peak in early April, more than 500 people died daily in New York City from the virus. Stay-at-home orders and the mass shutdown of public life brought that number down, but with frustratingly slow speed.

Since then, deaths and hospitalization rates have shrunk and hospital bed space and testing and contact tracing capability are high enough that New York City can enter its Phase One reopening.

As of Sunday, NYC hospitals have admitted 72 people due to Covid-19, 324 people remain in ICUs, and 4% of the city is currently testing positive for Covid-19, de Blasio said.

"Compared to where we were, this is a big sigh of relief," he said.

In celebration of those downward trends, landmarks across New York state were to be lit blue and gold Sunday night, Cuomo said.

Projections of the words "New York Tough" will also appear across the state, Cuomo said.

As office workers across the state begin returning to the workplace, Cuomo said he will also sign an executive order allowing commercial buildings to take the temperature of people entering.

"We're giving commercial buildings the right to take the temperature of everyone who walks into a building. It's not just your health, it's the people you could infect," Cuomo said.