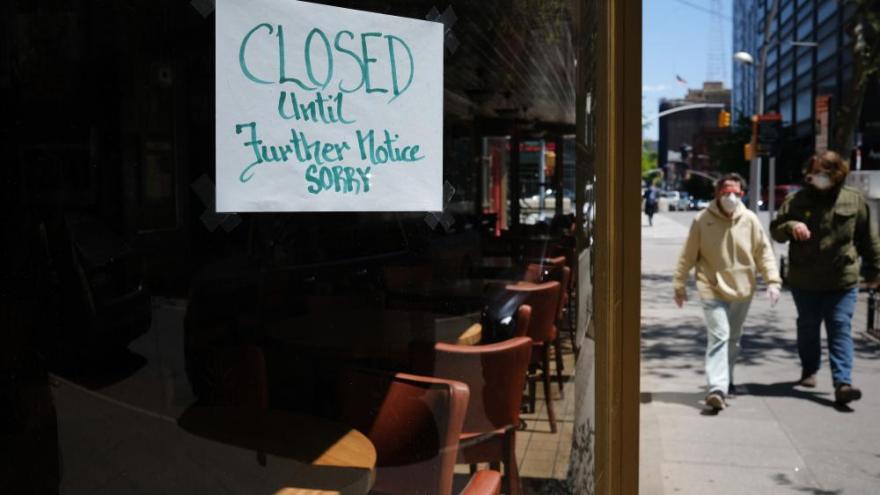 People walk through a shuttered business district in Brooklyn on May 12, 2020 in New York City. New York has borrowed more than $1.1 billion to pay unemployment claims triggered by the pandemic.

(CNN) -- New York has borrowed more than $1.1 billion from the federal government in recent weeks to pay the surge of unemployment claims triggered by the coronavirus pandemic.

The state's unemployment trust fund has run dry, so it must turn to the federal government for loans to cover its share of jobless benefits, which last up to 26 weeks. The federal government is picking up the tab for Congress' temporary enhancements to the program, which include boosting weekly payments by $600 and broadening eligibility to gig workers, the self-employed, independent contractors and certain people affected by the coronavirus.

New Yorkers, however, are guaranteed to get their benefits regardless of whether the money comes from the state's trust fund or a federal loan. It's not unusual for states to borrow federal funds during economic downturns.

Gov. Andrew Cuomo signaled in late April that the state would have to borrow from the federal government to make its payments.

The Empire State has paid out more than $10 billion, as of May 20, the state Department of Labor said. More than 3 million claims have been processed, as of late May. The state received federal authorization to borrow up to $4 billion. It will not have to pay interest in 2020, thanks to a coronavirus relief bill Congress passed in mid-March.

California recently borrowed $1.4 billion to cover claims, but paid it back last month with revenue from employers' unemployment taxes. Eight other states have also received authorization to borrow federal funds, though none are currently doing so.

Nearly 43 million million people -- more than one in four American workers -- have filed for first-time unemployment benefits since states began mandating residents stay home and non-essential businesses to close in mid-March to slow the spread of the virus. Many of those orders have now been lifted, at least in part, but continuing jobless claims show 21.5 million people out of work.

Federal and state spending on unemployment benefits totaled just over $172 billion, as of June 2, up from $12.7 billion at the beginning of March, according to Treasury Department data.