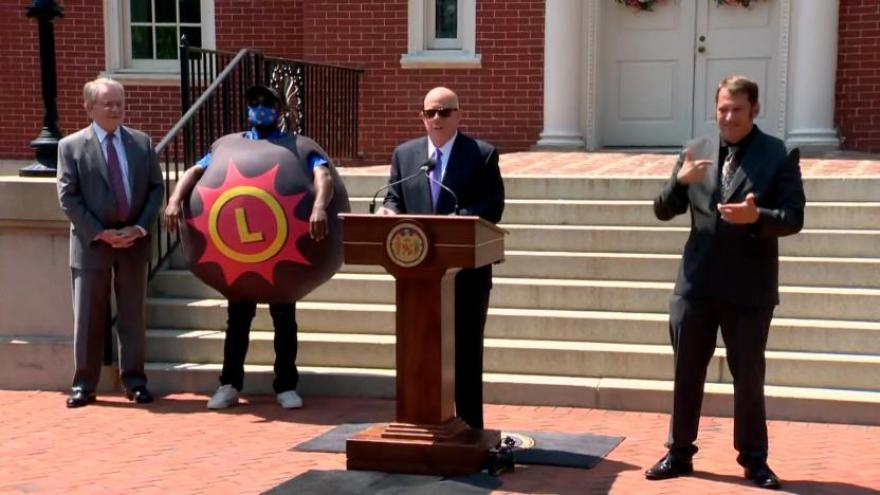 Maryland Gov. Hogan announces the lottery, which will award $40,000 to a vaccinated resident every day.

(CNN) -- New York and Maryland both announced lotteries on Thursday for people who get vaccinated against Covid-19, joining Ohio, which last week announced drawings to give away millions of dollars in a bid to boost flagging vaccination rates in the state.

New Yorkers who get vaccinated next week from Monday to Friday will be given a lottery ticket with a chance to win as much as $5 million, Gov. Andrew Cuomo said at a news briefing Thursday.

And starting on Tuesday, the Maryland Lottery will randomly select a vaccinated Marylander for a $40,000 prize every single day, Gov. Larry Hogan announced Thursday.

"So it's a total of $2 million in prize money for a vaccinated Marylander," Hogan said. "Entry is very simple -- all you have to do is get vaccinated for Covid-19 here in Maryland, be a Maryland resident and be 18 or older. Anyone 18 and older who has already been vaccinated for Covid-19 in the state of Maryland, at any time, is also eligible for these prizes and will automatically be entered to win."

"So remember Maryland -- get your shot for a shot to win," Hogan said.

Ohio Gov. Mike DeWine last week was the first state leader to announce lottery drawings in a bid to get more people inoculated, and vaccination rates have since picked up, the Ohio Department of Health said on Thursday.

The state is already seeing results, according to Ohio officials.

"The Vax-a-Million campaign has helped drive an increase in vaccination rates among Ohioans 16 and older by more than 28%" since it was announced on May 13, the department said in a release.

Vaccinations for that age group had declined by 25% over the weekend of May 7 to May 10, compared to the weekend earlier, officials said.

Subsequently, vaccination rates "increased by 28% for the same age group from May 14 to May 17," according to the release.

"This dramatic increase in vaccinations indicates that the Vax-a-Million drawing has been impactful in creating momentum for vaccinations throughout Ohio," said Stephanie McCloud, Director of the Ohio Department of Health.

"Troubling news" is how Cuomo described declining vaccination rates when he announced the New York lottery.

"The number of vaccinations are slowing, and they are slowing dramatically."

"So today we announced a plan where you could win up to $5 million if you get vaccinated next week. Vax and Scratch," the governor said. "How do you like that?"

The lottery ticket is for the $5 million mega multiplier New York State Lottery, Cuomo said, and there will be other prizes that "go down to $20."

The odds of winning something in the drawing is one in nine, he said.

In Maryland, Hogan said more than 67% of state residents 18 and older have been vaccinated, and the lottery is meant to "push us over the edge."

President Joe Biden has set a goal of having 70% of Americans getting at least one shot of Covid-19 vaccine by July 4.