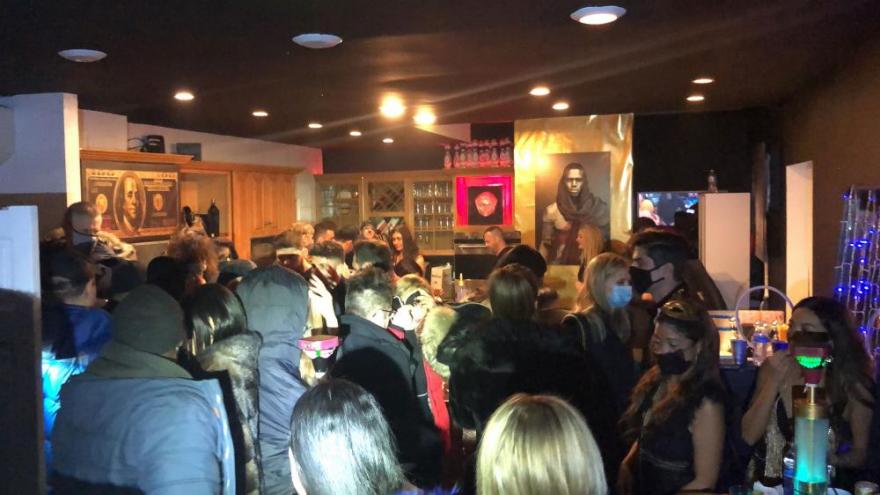 The New York City Sheriff's Office busted a New Year's Eve party at an illegal club in SoHo. It appeared no partygoers were charged.

One celebration in Queens had in excess of 300 patrons, who were "consuming alcohol, singing karaoke, and dancing." Congregants went unmasked, according to the sheriff.

The party, held at a lounge, allegedly operated like a speakeasy, with an emergency exit that "required an employee to open it from the inside," according to the sheriff's office.

The alleged organizer of the party, Man Phan, told CNN that he was not aware of rules against congregating in large groups ahead of the event. He said the party had only been intended for friends, and that no one was paying for alcohol or entry.

"It was not supposed to be that many people," Phan said, adding that he thought the actual number of partygoers was much less than the 300 approximated by the sheriff's office. "Things got out of control. We didn't mean it, but it happened that way."

Phan was issued violations for an unlicensed bottle club, violating executive and emergency orders, and obstructed egress, among others. His wife, a DJ and an employee also were issued violations, while the lounge was fined $15,000 for failing to protect health and safety.

Deputies raiding a party in the SoHo neighborhood of Manhattan found 145 people, also with many unmasked and dancing, while a Brooklyn gathering of 80 people blasted music through an open door, according to the sheriff.

The office shared a photo of the SoHo party, which showed boxes of Moet champagne and Patron tequila, alongside bottles of Bombay Sapphire and Ketel One vodka. Organizers were charged $1,000 each for violating orders against mass gatherings, while the promoter was charged with violating the orders and alcohol violations and fined $15,000 for failing to protect health and safety, according to the sheriff's office.

Organizers at all three events were issued violations for failing to protect health and safety, and violation of state and city orders against non-essential gatherings, among other charges. It appeared that no partygoers were charged.

Organizers for the Manhattan and Brooklyn parties could not be immediately reached by CNN.