New Year's Eve fireworks are on in some places, but they'll look a lot different this year 🎆 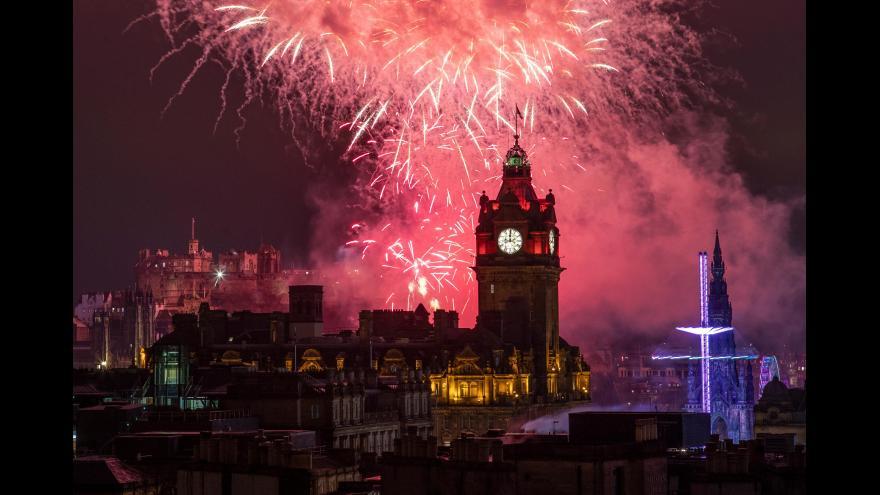 Fireworks are launched from Edinburgh Castle at midnight during the 2020 Hogmanay New Year celebrations.

(CNN) -- New Year's Eve celebrations around the world will look very different this year as cities take precautions against the spread of Covid-19.

The best view of most major cities is going to be from your couch. Most of the large traditional displays of fireworks and celebrations globally have been canceled and replaced with smaller televised or streamed events.

Here are the places still holding events and where to watch the downscaled favorites.

London's iconic fireworks show over the River Thames is canceled this year, and much of England is now under tough stay-at-home restrictions. But there will be a special broadcast on the BBC for people to enjoy while they're inside.

Yes, the ball will be dropping in Times Square and there will be some celebration, but the events are closed to the public. The show is going on for the annual national broadcasts on several stations, so even though no one is waiting for hours in the freezing cold, you can still see the events unfold as we count down to midnight.

There will be no public fireworks this year in Los Angeles, which is under a stay-at-home order. But residents can tune in to a virtual countdown party headlined by DJ Steve Aoki, billed as "the biggest virtual NYE dance party on the West Coast."

Everything is a go in Dubai to ring in the new year. There are at least 11 places to watch the sky light up on December 31, and everyone who comes from out of town to view them must be Covid-19-negative.

Rio has canceled fireworks displays and is restricting access to its beaches -- including the party hot spot of Copacabana -- in order to avoid crowds. Instead, there will be an online broadcast of celebrations.

Sydney is forgoing its traditional public showstopping New Year's Eve events for smaller celebrations that will be publicly broadcast. Instead of a huge fireworks show, there will be a smaller display over the Sydney Harbour Bridge at midnight.

Unfortunately, people in this usually vibrant city will have to eat their grapes at home this year. The cultural tradition is usually part of a huge event in the city, but because of Covid-19, that will not be the case for 2020.

Scotland's famous New Year's Eve celebration will not be taking place in person this year, but it will be happening online. Edinburgh's Hogmanay will include "Doctor Who" actor David Tennant; the Scots Makar, or national poet, Jackie Kay; Celtic fusion band Niteworks; and Scottish actors Lorne MacFadyen and Siobhan Redmond. The event is free to everyone worldwide.

The Big Easy is taking it easy this year. It will still host its portion of "Dick Clark's New Year's Rockin' Eve with Ryan Seacrest," but the events will be closed to the public.

The big fireworks in the City of Lights is off this year, but New Year's celebrations at Fremont Street and the Plaza Hotel are still a go. The hotel still plans to set off fireworks at midnight, and of course so do the locals. Even without the main display, if you are visiting the city or live there, the sky should be bright somewhere nearby.

There will be no public events held for those celebrating the new year in Paris, but there will be a livestreamed concert in Notre Dame Cathedral by composer and performer Jean-Michel Jarre for everyone to watch.