New videos show police getting punched during US Capitol riot 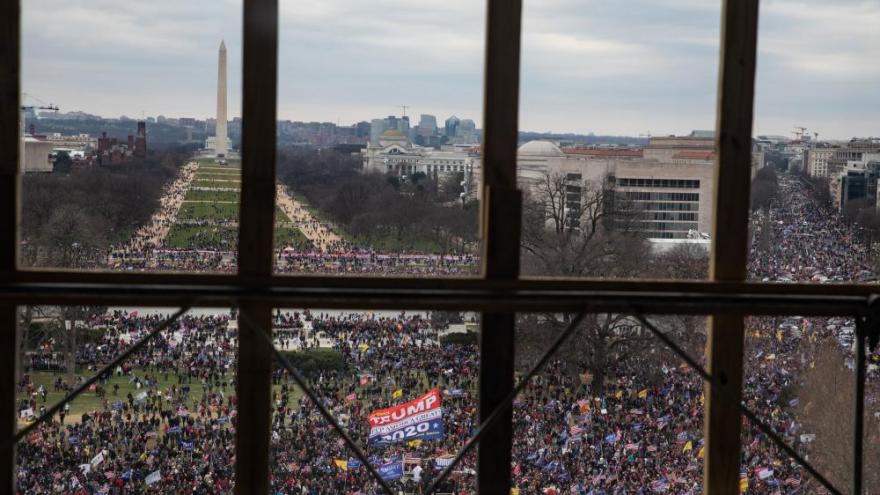 A crowd of Trump supporters gather outside as seen from inside the U.S. Capitol on January 6 in Washington, DC.

(CNN) -- Newly released footage from January 6 shows a supporter of former President Donald Trump taunting, stalking and punching law enforcement outside the US Capitol -- the latest release of up-close video of rioters who have been charged with assaulting police.

In the new video, Scott Fairlamb, a gym owner from New Jersey, leans into the face of a police officer, following him, and taunting him with expletives. At one point, Fairlamb shouts, "you have no idea what the f**k you're doing." He then pushes and punches an officer.

Fairlamb was one of the first rioters inside the Senate side of the building, according to court records, and is charged with 12 criminal counts including assaulting police and carrying a dangerous weapon into the Capitol.

Prosecutors had sent the video of Fairlamb directly to a federal judge reviewing his case months ago, and CNN and 16 other media outlets went to court to seek its release.

In all, the Justice Department released four clips Friday used in Fairlamb's case: footage from a police body-worn camera, a video taken by someone in the crowd and later posted to YouTube, and two short clips that Fairlamb uploaded to Facebook and Instagram while he was on Capitol grounds on January 6.

Prosecutors say the bystander video shows Fairlamb, in a camouflage jacket, shoving a police officer, who then falls backwards onto a group of rioters. As the officer regains his footing and starts walking away, Fairlamb then punches him in the face, hitting his helmet.

The police bodycam footage shows snippets of the same incident, from the perspective of one of the Washington, DC, police officers who was behind the officer that Fairlamb was taunting.

In a Facebook video the Justice Department also released, Fairlamb shouts "What patriots do? We f**king disarm them and then we storm the f***kng Capitol! F**k you!" He also carries a baton into the Capitol.

The video played a central role in how Judge Royce Lamberth of the DC District Court determined Fairlamb may still be dangerous.

"If any crime establishes danger to the community and a disregard for the rule of law, assaulting a riot-gear-clad police officer does," Lamberth wrote in April, deciding to keep Fairlamb in jail pending trial. The judge had reviewed the videos in private, after prosecutors sent them to his chambers via email.

Fairlamb had a history of assault charges and had punched people in the face before -- just like he allegedly had with an officer.

More than a dozen news outlets led by CNN have spent months seeking access to videos used in court against Capitol riot defendants. Much of the police body camera footage and surveillance tapes that are now being used in court still haven't been seen publicly. The Justice Department has not released many of the tapes, and court proceedings have been conducted virtually during the pandemic. Media outlets have struggled to even view these clips.

Prosecutors say that the 56-second tape shows Webster, wearing a red coat among a large crowd of pro-Trump rioters, screaming profanities at officers, threateningly wielding a flagpole, and finally rushing at the officers, who engaged in hand-to-hand combat with him and other members of the mob. One of the officers eventually wrestles away the flagpole, but Webster then tackles the cop to the ground.