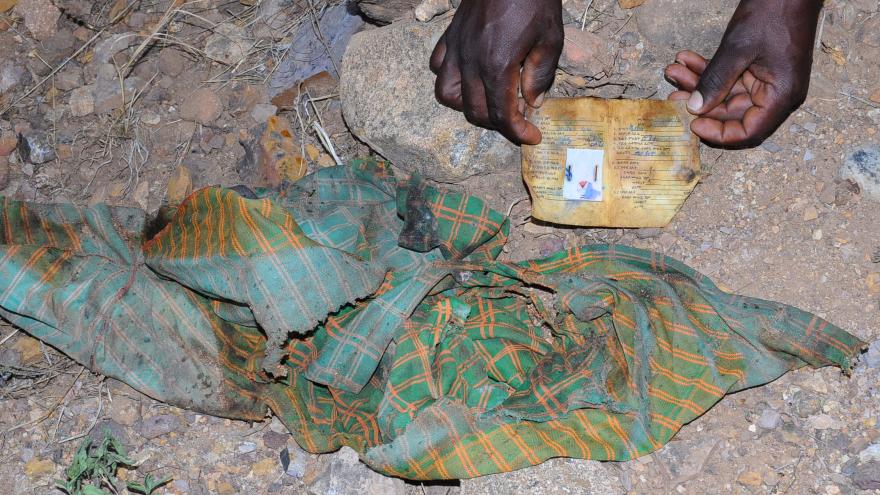 (CNN) -- A few scattered human bones lay on the rocky ground, along with a broken skull and several half-burned identification cards.

That is all the villagers could find, six months after Ethiopian troops rounded up their loved ones and shot them at point-blank range, throwing the bodies off a rocky hillside deep in the mountains of central Tigray in Ethiopia.

An April 2021 CNN investigation, in collaboration with Amnesty International, examined video clips of the January massacre and used geolocation techniques to verify the video was filmed on a ridge near Mahibere Dego in January 2021. The investigation revealed at the time that at least 11 unarmed men were executed, and 39 others were unaccounted for.

CNN was sent the gruesome footage in March this year by a pro-Tigray media organization, the Tigrai Media House (TMH). TMH told CNN at the time that the video was filmed on a mobile phone by an Ethiopian army soldier turned whistleblower involved in the mass killing.

An additional longer video clip of the massacre has now been shared with CNN by TMH, revealing new details about the atrocity and the soldiers behind it.

CNN used geolocation techniques to determine the extended footage was also filmed at the ridge near Mahibere Dego. A voice at the end of the new clip identifies the Ethiopian soldier filming the video as "Fafi." He also reveals his military brigade and division.

In the extended video seen by CNN, Fafi swaps the phone with another soldier, takes the gun and shoots. The phone is then swapped back as others clamor to be filmed executing the captives, brazenly documenting their crimes.

This extended footage has all the hallmarks of a trophy video and yet -- despite the evidence -- the Ethiopian Prime Minister's Office dismissed the findings of CNN's original investigation saying, "social media posts and claims cannot be taken as evidence."

Six months after the attack, two people in Mahibere Dego told CNN they had collected the national identification cards of 36 people who were killed, but another 37 people remain missing, indicating the toll of the massacre could have been more than double what was initially reported.

CNN reached out to the Ethiopian government but it did not respond.

Ethiopia is under growing international pressure over a number of reported atrocities in its war-torn northern Tigray region that could amount to war crimes.

Thousands of civilians are believed to have been killed since early November, when Prime Minister Abiy Ahmed launched a major military operation against the ruling Tigray People's Liberation Front (TPLF), sending in national troops and militia fighters from Ethiopia's Amhara region.

CNN has previously compiled extensive eyewitness testimony that Ethiopian soldiers and soldiers from neighboring Eritrea were perpetrating massacres, extrajudicial killings, sexual violence and other abuses in the region.

Since January, families of the victims in Mahibere Dego say they have been unable to access the ridge due to the continued presence of Ethiopian troops in the area -- leaving them without a way to bury their loved ones.

But last Friday, the soldiers departed for nearby Axum, giving locals a long-awaited opportunity to search for any remains, according to nine people CNN interviewed who had visited the massacre site.

Over a period of days, family members of the victims filmed the church burials, documented evidence of bullet casings at the massacre site and took photographs of skeletal remains which they sent to CNN. We are not naming the family members who fear for their safety.

One family member told CNN that even while villagers were gathering up the remains of their loved ones, the area came under attack. Violence in Tigray has once again intensified in recent weeks after Tigrayan forces launched a renewed offensive last week.

Even after Ethiopian soldiers withdrew, the massacre site remained under attack.

"The soldiers from Axum started to bomb the area with artillery [fire] around 9-10 p.m. Everyone scattered and ran back home," the family member said.

But the villagers refused to stay away, he said, waiting a few days to come back at night to finish what they had started.

In images too graphic to publish, it's clear the remains were too decomposed to allow for identification of the victims -- for some there were only metal belt buckles. Families said they instead relied on items of clothing and ID cards to identify their relatives.

Villagers told CNN the continued presence of soldiers in the area was an attempt to hide evidence of the killings.

Images of bullet casings found by villagers as they scoured the area for their relatives' remains, were shared with CNN. An arms expert told CNN these would normally be used in light machine guns and assault rifles like those seen in the massacre video.

CNN used geolocation to verify that the video of the bullet casings was from the same massacre site.

CNN also obtained images taken on June 21 that show bones, charred remains, clothes and ID cards at site of the attack. Some of the clothes were also seen in the original video clips investigated by CNN.

Families brought the remains they could find to Mariam Megdelawit church, a few kilometers from the massacre site, for an emotional ceremony where they prayed for justice, and to heal their loss on June 21.

Video sent to CNN by family members of the victims show the bones of victims being carried into the service in large jute bags and placed together while crowds gathered in a circle around them to mourn and weep.

"The village couldn't wait any longer, [they were] saying 'we can't get peace unless we bury them,'" he said.

CNN geolocated the footage of the ceremony by matching it to satellite imagery of the area that showed the same church structure, vegetation layout, soil color and topography.

Sunlight in the footage indicates that the burials took place at approximately 9 a.m. This corresponded to the timings stored in metadata, which some of the footage retained.

Many of those targeted in the extrajudicial executions were young men of so-called "fighting age."

One of the young men executed in the massacre was 23-year-old Alula. His brother told CNN he discovered Alula's ID card amid the remains.

CNN first reported on Alula in April when his brothers discovered his fate while watching a TV report about the massacre. At the time, another one of Alula's brothers told CNN it was hard to accept.

Though the family says they have been unable to find his remains, Alula's ID card is enough, they say, to give them some closure.