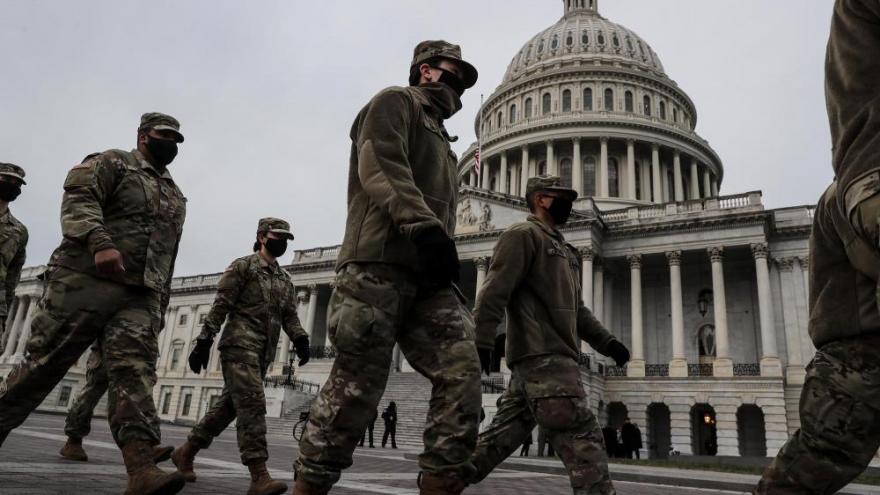 (CNN) -- Thousands of armed pro-Donald Trump extremists are plotting to surround the US Capitol ahead of President-elect Joe Biden's inauguration, according to a member of Congress who was among those briefed late Monday on a series of new threats against lawmakers and the Capitol itself.

"They were talking about 4,000 armed 'patriots' to surround the Capitol and prevent any Democrat from going in," Rep. Conor Lamb, a Pennsylvania Democrat, told CNN's Alisyn Camerota on "New Day." "They have published rules of engagement, meaning when you shoot and when you don't. So this is an organized group that has a plan. They are committed to doing what they're doing because I think in their minds, you know, they are patriots and they're talking about 1776 and so this is now a contest of wills."

He continued, "We are not negotiating with or reasoning with these people. They have to be prosecuted. They have to be stopped. And unfortunately, that includes the President, which is why he needs to be impeached and removed from office."

Monday's briefing followed an FBI bulletin warning of "armed protests" being planned at all 50 state capitols and in Washington, DC, and provides the latest sense of a heightened state of alarm among lawmakers and law enforcement officials following last week's deadly siege at the US Capitol.

Two Democratic lawmakers who participated in the briefing told CNN that they were walked through several scenarios on a call Monday and officers were sober about the threats. An effort was made to emphasize how different security is right now, the members said.

"They are very strong when we are weak. That is when the mob psychology takes hold and they are emboldened, but when met with actual determined force, I think a lot of these fantasy world beliefs about what will happen when they come to Washington will melt away," one of the members said.

The member added that lawmakers are hoping National Guard troops who are being dispatched to the capital are vetted, because while lawmakers trust most of them, many will be coming in from all over the country.

Early Tuesday afternoon, The Washington Post reported that an FBI office in Norfolk, Virginia, issued an "explicit internal warning that extremists were preparing to travel to Washington to commit violence and 'war.'" Although the FBI report was described as not "finally evaluated intelligence," it is likely to raise additional questions about how law enforcement officials missed signs leading up to last week's attack and readiness ahead of potential new threats.

Security stepped up ahead of inauguration

The congressional inaugural committee on Tuesday said it would initiate a special security event on Wednesday and informed those at the Capitol to "expect a significant law enforcement and national guard presence as part of the layered security measures within the expanded footprint."

In Washington itself, security measures are being stepped up, with federal, state and local law enforcement agencies preparing for the possibility of more violence.

Washington, DC, Mayor Muriel Bowser on Monday urged Americans to avoid the city during Biden's inauguration next week and to participate virtually, referring at a news conference to "very extreme factions in our country that are armed and dangerous."

At the mayor's request, Trump approved an emergency declaration for the city ahead of the ceremony.

In addition to warning of possibly more armed demonstrations by right-wing groups in coming days, the FBI is tracking reports of "various threats to harm President-Elect Biden ahead of the presidential inauguration," the bulletin states. "Additional reports indicate threats against VP-Elect Harris and Speaker Pelosi.

Asked if Biden should still do a traditional outside inauguration given the information he has received, Lamb said if Biden wants to have one outside, he will be there beside him.

"I believe that Joe Biden was elected President by a huge margin because the American people trust him to exercise powers of commander in chief. And I saw him on TV yesterday saying he's not afraid to do this outside. And I agree with him and I believe him," Lamb said. "So if that's what he wants to do, I'll be right there beside him because I think the most important thing is to continue showing all Americans that no matter how impassioned and, you know, committed these people who attacked the Capitol are, we are more committed."

Trump on Tuesday insisted his inflammatory speech an hour before last week's siege -- in which he told supporters they will "never take back our country with weakness, you have to show strength and you have to be strong" -- was "totally appropriate." He did not condemn last week's events and sought to create a false equivalency with the deadly violence committed by his supporters in his name with protests over the summer in Seattle and Portland, Oregon, that largely focused on racial justice.

The President did not address the prospect of additional threats in the days ahead, but said, "you always have to avoid violence."