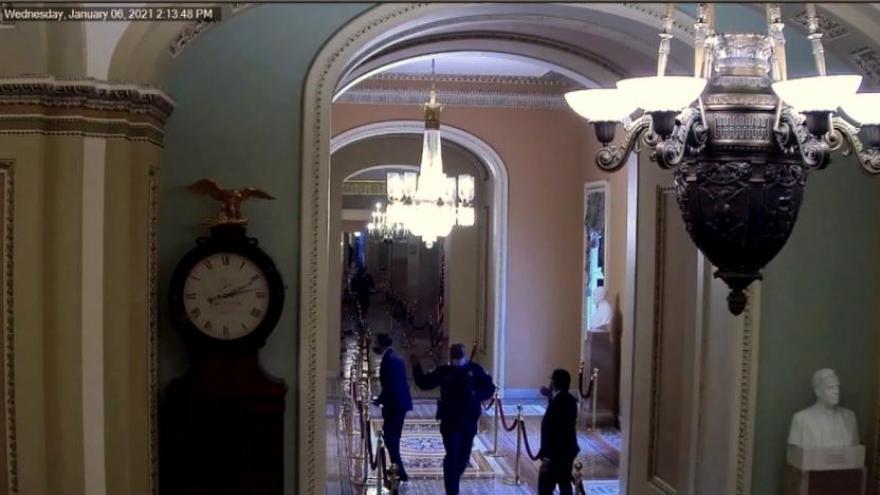 Capitol officer Eugene Goodman directs Sen. Mitt Romney out of the path of the rioters on January 6, in Washington, DC.

The security video, which the House impeachment managers played for the first time Wednesday, shows Goodman running as the mob begins to enter the Capitol. Goodman passes Romney and redirects him from the rioters' path before continuing to the first floor to respond to the breach and divert the mob from lawmakers.

Romney, of Utah, is a frequent target of criticism from Trump supporters. He was the only Republican to vote to convict Trump during his first impeachment trial last year and has frequently criticized him throughout his time in politics, both before and after his presidency.

Romney told reporters after the video played that it was "obviously very troubling" and that he hadn't known he had come that close to the rioters. "It tears your -- your heart and brings tears to your eyes. That was overwhelmingly distressing and emotional," he said.

Romney was seen speaking with Goodman in the Senate chamber later Wednesday. He told reporters he thanked Goodman for coming to his aid.

"I expressed my appreciation to him for coming to my aid and getting me back into the path of safety and expressed my appreciation for all that he did that day, and he took me through his full day," Romney said. "And he was exhausted going from one part of the building to the other, up and down stairs. He indicated that he had to breathe a lot of bear spray and tear gas, and that he was nauseated. And so, he was talking to me about the whole day, and I just again told him how much I appreciated him, making sure that I was out of harm's way."

Romney said he received a text on January 6 that rioters had gotten inside the Capitol, and he stood up to leave the Senate because he wanted to go to a hideaway. Romney said when he got into the hallway "there was no one there" except for Goodman.

"Officer Goodman came and saw me and said, 'Go back in, it's not safe here. Go back in, you'll be safer in the chamber.' So, I came back, and took my seat," Romney said.

The video of Goodman's efforts was played alongside additional new Capitol security footage showing how the rioters violently breached the complex and the threat they posed to everyone in the building as the managers argued that Trump was responsible for inciting the episode.

Democratic Del. Stacey Plaskett of the Virgin Islands, one of the nine impeachment managers, walked senators through the security footage, showing where the rioters had breached the Capitol and how close they were to then-Vice President Mike Pence, whom they were targeting.

"They were coming at the urging of Donald Trump to keep Congress, a separate branch of government, from certifying the results of a presidential election," Plaskett said.

Goodman, now the acting deputy Senate sergeant-at-arms, had already been hailed as a hero after previous video emerged of him guiding the violent mob away from the Senate chamber, where Pence had been conducting the ceremonial counting of the 2020 electoral votes.

Footage from the insurrection captured by Huffington Post reporter Igor Bobic shows Goodman being chased up a Capitol staircase by a mob of insurrectionists shortly after they'd broken in. When he reached a landing, he looked to his left, where he noticed the door to the Senate chamber was still unguarded. He then led the rioters to the right, away from lawmakers and toward backup officers.

The Senate chambers wouldn't be secured until one minute later, according to CNN's timeline of events from the riot.

Some lawmakers have introduced legislation to recognize Goodman with a Congressional Gold Medal for potentially saving lives. The medal is reserved for Americans who've made "distinguished achievements and contributions" to their country.

This story has been updated with comments from Sen. Mitt Romney.