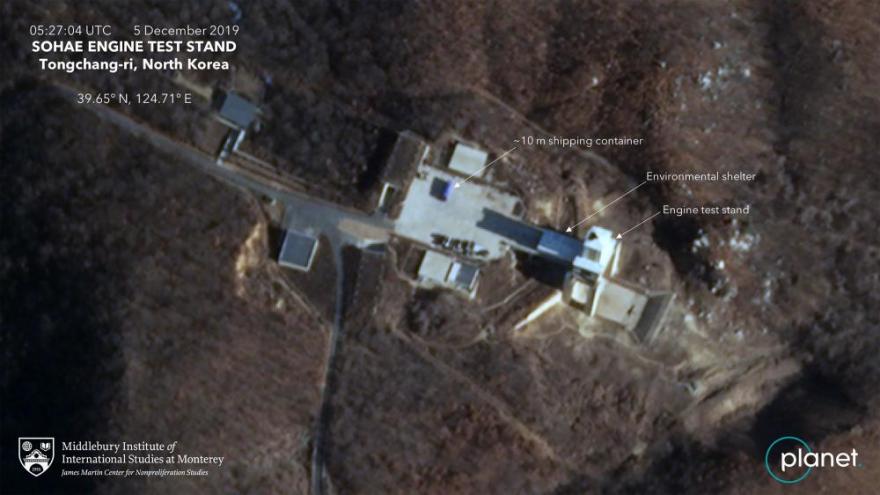 A new satellite image obtained by CNN indicates North Korea may be preparing to resume testing engines used to power satellite launchers and intercontinental ballistic missiles at a site President Donald Trump previously claimed was dismantled after his Singapore summit with dictator Kim Jong Un this summer, according to experts who analyzed the photo.

(CNN) -- A new satellite image obtained by CNN indicates North Korea may be preparing to resume testing engines used to power satellite launchers and intercontinental ballistic missiles at a site President Donald Trump previously claimed was dismantled after his Singapore summit with dictator Kim Jong Un, according to experts who analyzed the photo.

The commercial satellite imagery, which was captured on Thursday by Planet Labs, shows new activity at Sohae Satellite Launching Station and the presence of a large shipping container at the facility's engine test stand, according Jeffrey Lewis, director of the East Asia Nonproliferation Program at the Middlebury Institute, which works in partnership with the imaging company.

The shipping container was not seen at the site before Thursday and its presence suggests the North Koreans are moving to resume tests engine tests at Sohae, Lewis told CNN.

The Pentagon and CIA did not immediately offer comment when asked about analysis related to the image.

While engine tests are considered to be less provocative than those involving missiles or satellites, Lewis said that the activity at Sohae is a significant development and a step toward weapons launches of a more threatening nature.

The timing of renewed activity at Sohae also sends a clear message to Trump after a foreign ministry official said earlier this week that Pyongyang was preparing a "Christmas gift," for Washington, but warned that the present the Trump administration will receive depends on events in the coming days.

That ominous threat has appeared to escalate tensions between the two countries.

A senior member of the North Korean government again described Trump as a "dotard" Thursday after the US President revived the war words with Kim Jong Un by calling the North Korean leader "Rocket Man."

Speaking of the North Korean leader at the NATO summit in London on Tuesday, Trump said: "He really likes sending rockets up, doesn't he? That's why I call him Rocket Man." Trump added that he and Kim have "a good relationship."

Choe Son Hui, North Korea's First Vice-Foreign Minister, was quoted by North Korea's state news agency as saying the foreign ministry "can not repress displeasure over the utterances made by President Trump inappropriately at the most sensitive time."

Choe added: "If any language and expressions stoking the atmosphere of confrontation are used once again on purpose at a crucial moment as now, that must really be diagnosed as the relapse of the dotage of a dotard."

The statement on Thursday is the latest in a series of increasingly dire warnings by North Korea, and recalls the strong language between the two leaders that escalated in 2017, before a landmark meeting the following year in Singapore.

Resuming engine tests at Sohae would also carry symbolic meaning as it was the site North Korea agreed to dismantle after the summit in Singapore.

At a press conference after their meeting, Trump said Kim had agreed to destroy "a major missile engine testing site."

"That was not in your agreement," Trump told reporters at the time. "I got that after we signed the agreement. I said, 'Do me a favor. You've got this missile engine testing site. We know where it is because of the heat.' It's incredible the equipment we have, to be honest with you. I said, can you close it up?' He's going to close it up."

North Korea did dismantle the test stand at Sohae but reassembled it March 2019, according to Lewis. "Still, we had not seen activity at the site until today," he said.

The move is consistent with North Korea's recent announcements suggesting it intends to move forward with those tests, Lewis added.

Diplomats from Pyongyang and Washington have been attempting to negotiate a trade that would see Kim give up the country's nuclear weapons and the ballistic missiles used to deliver them in exchange for relief from punishing US and United Nations sanctions that have crippled the North Korean economy.

Though North Korea first detonated a nuclear device in 2006, Pyongyang successfully test-fired missiles that could potentially hit the US mainland with a nuclear warhead for the first time in 2017 -- upping the stakes significantly and increasing the urgency to reach a peaceful solution to a decades-long struggle.

North Korea has this year continually blamed the US for the lack of progress in nuclear negotiations, singling out Secretary of State Mike Pompeo and former National Security Adviser John Bolton for censure. However, Pyongyang has made a notable effort not to criticize Trump and has emphasized the importance of the two leaders' relationship.

Even if Trump was joking when he brought back a favorite nickname he used before his budding friendship with Kim, indications that North Korea is ready to resume testing at Sohae is only fueling concerns that the President may have been playing with fire.