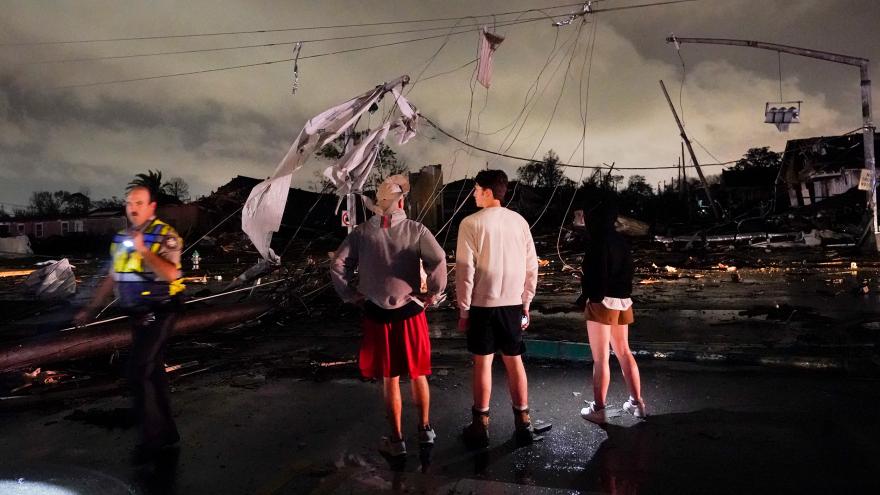 (CNN) -- A large, deadly tornado battered parts of the New Orleans area on Tuesday night, with damage reported in Arabi and the Lower Ninth Ward.

McInnis had no details on the fatality and said parish officials have several reports of residents going to the hospital, but no specific numbers on injuries.

Some homes were "picked up off their foundations and are lying in the street," he said.

McInnis earlier described the damage in Arabi as widespread and major, according to CNN affiliate WDSU.

Emergency responders are conducting search and rescue efforts. That includes units from the State Fire Marshal's Office, the agency said.

"Arabi/W. Chalmette is without power- I just ran over a power line. Some kind of wind source just tore down Aycock Street from Judge Perez all the way down to Saint Claude... If I had left five minutes earlier I would've been right in the middle of it," he wrote. "Down trees all over Judge Perez, I'm still trying to see if I can get through it to work I had to go around already."

The National Weather Service reported the tornado moved through a portion of St. Bernard Parish and neighboring Orleans Parish. WDSU said the twister moved through the Lower Ninth Ward and many homes were in the dark.

According to PowerOutage.us, there were more than 10,000 customers without power in Orleans and St. Bernard Parish.

The weather service said there were two tornado reports in St. Tammany Parish.

There have been no reports of injuries or major damage after a possible tornado struck in Jefferson Parish, according to a tweet from the parish government.

"Our Jefferson Parish Department of Fire Services is reporting no major structural damage or any injuries from the tornado at this time," the tweet said.

"My prayers are with you in Southeast Louisiana tonight. Please be safe," he said.