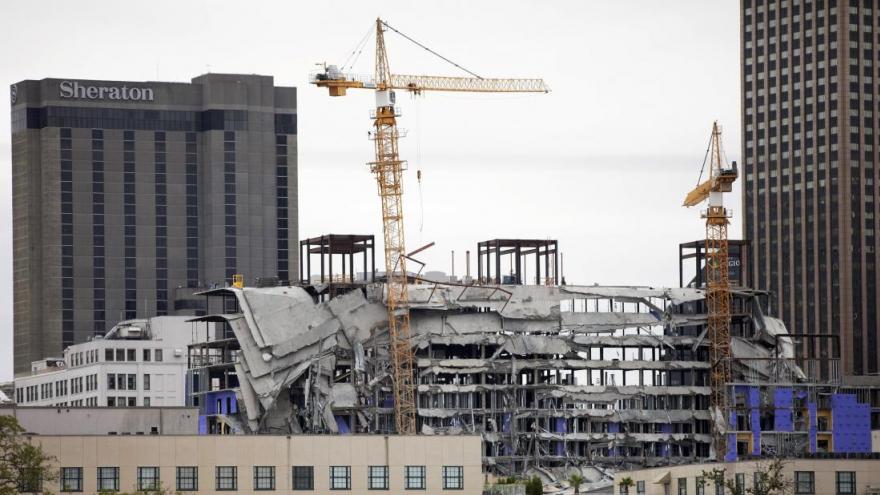 The City of New Orleans plans to bring down two cranes at the construction site of the Hard Rock Hotel that collapsed over the weekend, killing at least two people, according to New Orleans Fire Chief Timothy McConnell. Full credit: David Grunfeld/The Advocate/AP

(CNN) -- The City of New Orleans plans to bring down two cranes at the construction site of the Hard Rock Hotel that collapsed over the weekend, killing at least two people, according to New Orleans Fire Chief Timothy McConnell. Authorities are citing a potential tropical storm that could enter the area by Friday night.

Louisiana Gov. John Bel Edwards said the main concern is elevated winds from the storm that formed Thursday morning in the Gulf of Mexico, which would pose a danger to the cranes' already precarious stability. New Orleans Mayor LaToya Cantrell issued a state of emergency for the city due to the storm, as well as the partial collapse of the Hard Rock Hotel, her office said Thursday.

The cranes have been shifting since the building's collapse days ago, hindering efforts in searching for one person who remains missing or retrieving bodies of the deceased.

Authorities had been trying to stabilize the cranes, but announced Wednesday that the rescue mission has moved to recovery. McDonnell said it was a difficult decision, but it is unlikely that the missing person survived.

How will authorities blow them up?

Experts will strategically place explosives onto the cranes, in hopes that the crane debris will land in a close area underneath, avoiding major gas and power lines, according to McConnell.

McConnell said authorities are also taking into account the locations of the two deceased individuals still inside the hotel. Crews hope to have the cranes down by Friday evening before dark, McConnell said.

New Orleans Mayor LaToya Cantrell has also announced that a private memorial service will take place Friday morning for those killed in the collapse.

10 people injured in the collapse are suing the construction companies

10 people who were injured in the collapse filed a lawsuit Thursday, accusing the construction companies involved of liability and negligence. According to lawsuit filed, many of the plaintiffs say they have suffered head, neck, back, and shoulder injuries, as well as respiratory injuries "resulting from falling construction debris" during the collapse, among other things.

CNN has reached out to the construction companies and is waiting to hear back.

The lawsuit accuses the construction companies of failing "to take reasonable care in planning, assessing, and monitoring the construction of the collapsed structure." It also claims that "it was apparent that the structural supports at the building were inadequate to support the weight of the concrete slabs on the upper floors."

"The primary goal is to get to the bottom of exactly what happened, and make sure that nothing like this ever happens again," an attorney for the plaintiffs said.

Citadel Builders, one of the defendants named in the lawsuit, says in a statement posted on their website that "safety has always been and shall remain a priority for our employees and subcontractors ... we are working with some of the finest engineering minds in the world and will get to the bottom of" what caused the collapse. CNN is awaiting comment from the other defendants.

Portions of the building came crashing down last Saturday morning in downtown New Orleans. There were more than 100 construction workers on site at the time, according to one of the construction companies.

Video footage showed workers emerging from a giant cloud of dust after the upper floors of the building collapsed and debris filled the street below.