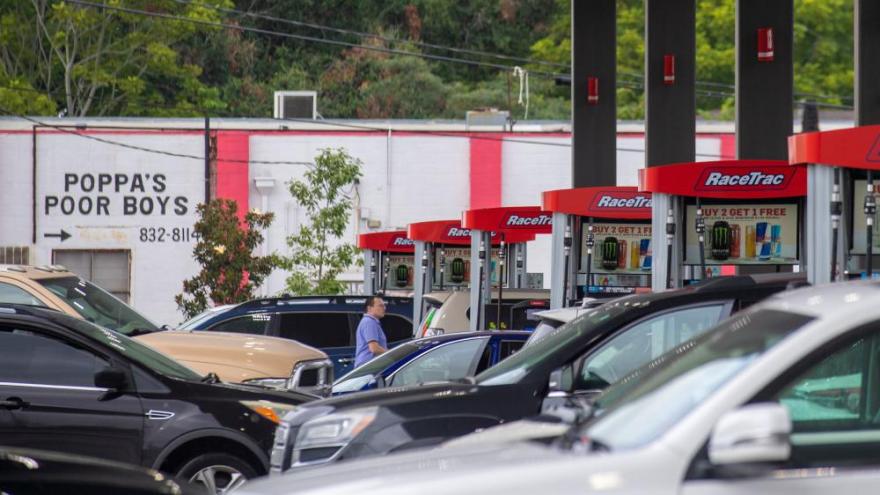 Long lines build at a gas station in Jefferson, Louisiana, as people prepare for the arrival of Hurricane Ida on Friday, Aug. 27.

Hurricane Ida was moving into the Gulf of Mexico on Friday as a Category 1 hurricane but forecasters say it could hit the Gulf Coast as a Category 4 storm on Sunday.

In New Orleans, Mayor LaToya Cantrell announced Friday evening that the National Weather Service and Gov. John Bel Edwards have indicated there is no time for implementing contraflow traffic, meaning the city cannot issue a mandatory evacuation for areas inside the levee system.

Contraflow is when authorities use some lanes of traffic for travel in the opposite direction of what was intended so more vehicles can leave an area.

New Orleans has now pivoted to a voluntary evacuation for areas not already under a mandatory evacuation order, the mayor said. The city will close on Monday, giving eligible employees an opportunity to voluntarily evacuate as well.

Cantrell had already issued a mandatory evacuation of areas that are outside its flood protection system.

"The situation is much more serious than it was six hours ago, and the hurricane, it represents a dramatic threat to the people of the city of New Orleans. Time is not on our side," Cantrell said.

Earlier she urged residents to have hurricane preparations in place by Saturday afternoon. "Do not wait," she said.

According to Collin Arnold, director of the New Orleans Office of Homeland Security and Emergency Preparedness, the city is anticipating impacts from damaging winds up to 110 mph, which could cause downed trees, structure damage and prolonged power outages.

Heavy rain in excess of potentially 16 to 20 inches over two days is also expected, which could cause significant flooding and storm surge outside of the levee system up to 11 feet, Arnold said.

Inside the system, dangerous winds pose a significant threat for extended power outages.

"Please consider evacuating if you are able, especially if you are elderly or dependent on power. That's our main concern here, is the electrical outages ... post storm," Arnold said. "And if you are going to evacuate, you know that's a responsibility that you take on -- do so as soon as possible. You do not want to be stuck on the road, when the storms impacts arise."

Cantrell also said the city has already executed contracts associated with having adequate bus transportation should a post-evacuation be needed.

The National Hurricane Center said Ida, which had sustained winds of 80 mph Friday evening, could hit the US with winds of 140 mph.

Hurricane Katrina had sustained winds of 125 miles per hour when it made landfall in southeast Louisiana on August 29, 2005.

Storm surge that caused much destruction in Louisiana when the water topped levees and flood walls. More than 80% of New Orleans flooded.

"In Southeast Louisiana, storm surge values ranged from 10 to 20 feet and impacted areas extending from Terrebonne Parish to the Northshore communities of Lake Pontchartrain including Mandeville and Slidell," the National Weather Service in New Orleans says on its archive page about Katrina.

More than 1,500 people in Louisiana died after Katrina hit. According to the Census Bureau, 70% of New Orleans' occupied housing, 134,000 units, was damaged in the storm.