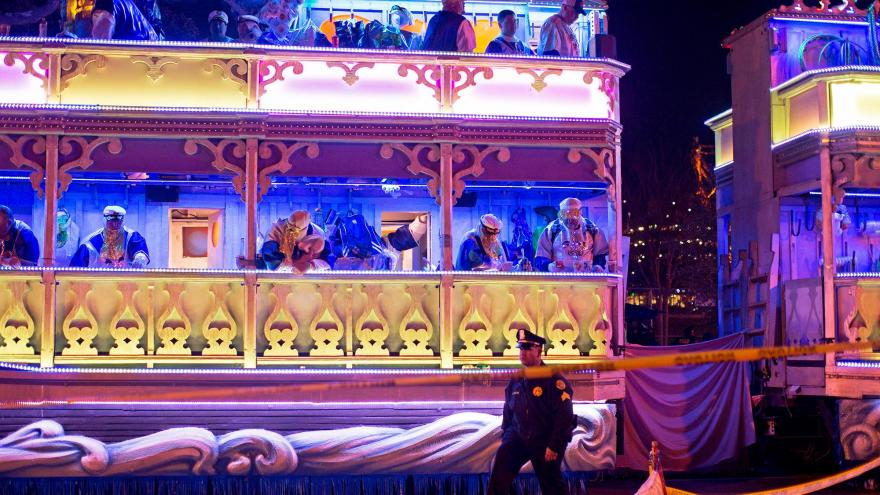 New Orleans officials have banned tandem floats from parading during the rest of the Mardi Gras season after two people were killed in separate accidents last week.

(CNN) -- New Orleans officials have banned tandem floats from parading during the rest of the Mardi Gras season after two people were killed in separate accidents last week.

Both incidents -- one on Saturday and the other on Wednesday -- involved tandem floats, which have two or more floats connected together by a hitch and pulled by one tractor. NOLA Ready, the city's emergency preparedness campaign, and Mayor LaToya Cantrell announced tandem floats won't be allowed for the rest of the season.

"Our hearts break for those lost and for their loved ones, and our prayers and deepest sympathies are with them -- and will be with them in all the days and months ahead," Cantrell said in a statement. "May our people take this moment to uplift our brothers and our sisters, to mourn as one and to move forward, together."

The most recent incident took place Saturday night when a man was struck at the Krewe of Endymion parade, authorities said. Police Superintendent Shaun Ferguson said a tandem float was involved in the incident.

Police responded "in record time," Cantrell said. After the incident, the final part of the parade was canceled, NOLA Ready tweeted.

"I do have my concerns and I think we have to do our due diligence in making sure this is a safe Carnival for everyone," Ferguson told reporters.

Ferguson said there will be one tractor for each float section in the future.

The Endymion parade is one of the most popular and one of the most family-oriented parades leading up to Mardi Gras, which is Tuesday. The parade is held in the Mid-City neighborhood and includes 37 tractor-drawn floats, some of them double- and triple-deckers.

That incident followed a Wednesday fatality when a woman was hit with a tandem float during the Krewe of Nyx parade.

The Krewe Endymion parade was the scene of a 2017 incident. A drunk driver injured dozens when he hit two cars with his pickup truck before running into the crowd. The driver went to prison and was released in July 2018, NOLA.com reported.