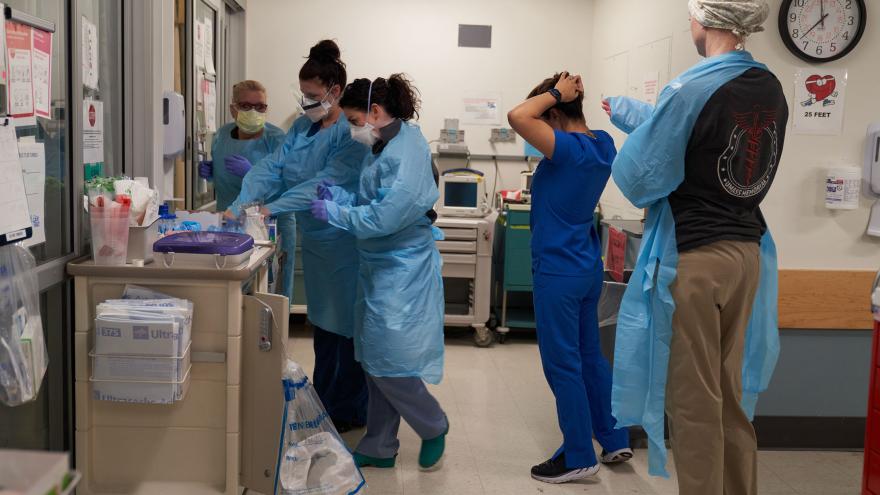 (CNN) -- A five-fold increase in pediatric admissions in New York City this month. Close to double the numbers admitted in Washington, DC. And nationwide, on average, pediatric hospitalizations are up 35% in just the past week.

The highly transmissible Omicron variant is teaming up with the busy holiday season to infect more children across the United States than ever before, and children's hospitals are bracing for it to get even worse.

"I think we are going to see more numbers now than we have ever seen," Dr. Stanley Spinner, who is chief medical officer and vice president at Texas Children's Pediatrics & Urgent Care in Houston, told CNN.

"Cases are continuing to rise between Christmas gatherings and we're going to continue to see more numbers this week from that," Spinner said in a telephone interview.

"Now we're going to have New Year's on top of that this coming weekend, with more people getting together -- more exposures and then those numbers will continue to climb," he added.

Across the country, pediatricians are bracing for a busy January.

"It's almost like you can see the train coming down the track and you're just hoping it doesn't go off the rails," Dr. Claudia Hoyen, director of pediatric infection control at UH Rainbow Babies and Children's Hospital in Cleveland told CNN.

"It's going to be a very interesting couple of weeks. We've just had all of these kids mixing together with everybody else during Christmas. We have one more holiday to get through with New Year's, and then we'll be sending everybody back to school," Hoyen said.

"Everybody is kind of waiting on the edge, wondering what we'll end up seeing."

And while the Delta variant infected more children than previous variants, Omicron is looking even worse, Spinner said.

"What's concerning on the (pediatric) side is that, unlike the adults -- where they're reporting for the number of adults getting infected relatively low numbers getting hospitalized -- what we're really seeing, we think, is an increasing number of kids being hospitalized," Spinner said.

"So that is a concern to us, especially with those that can't be vaccinated under 5 or those that are not fully vaccinated or not vaccinated at all that are eligible over 5. So it is a big concern."

While Spinner sees little evidence the Omicron variant is causing more severe disease in children than previous variants did, he's also seeing no evidence it's milder.

"We do everything we can to keep a child out of the hospital. So if they're admitted to the hospital, then that means that they're already pretty sick," Spinner said.

"They're needing oxygen. They're needing some other assistance. Even if they're just really dehydrated, needing IV fluids, most of these kids that we're admitting for Covid are kids that have respiratory issues -- that they need oxygen and they need other support. So they're going to be pretty sick. You know, you don't see kids that are not very sick in the hospital."

Children are an easy target for the virus, Dr. Juan Salazar, physician in chief at Connecticut Children's Medical Center in Hartford, told CNN

"It's affecting larger communities and it's certainly affecting children in a way that we hadn't seen before. And that's new compared to last year," he said. Only about a third of eligible children, ages 5 and older, are vaccinated in Connecticut, Salazar estimated.

"Because of that, the virus has found a niche. At least here in Connecticut, it does look like it shifted in where it is going," he added. Younger children who cannot be vaccinated yet, or older kids who have yet to be fully vaccinated or vaccinated at all, are becoming infected, he said.

"Perhaps it is more widely spread now that we've liberalized our social gatherings. Perhaps some of the masks have come off -- families are tired. They are not willing to undergo some of the strict isolation policies from a year ago," Salazar added.

"And so that has allowed these new variants to spread more widely. And for that reason it's affecting kids who at this point are the most at-risk population because they're not vaccinated, or many of them are not."

Milder infections for some kids, but not all

Children seem to be only mildly ill, for the most part, in New Jersey, said Dr. Jennifer Owensby of the pediatric critical care division at Rutgers Robert Wood Johnson Medical School.

"We are definitely seeing an increase in Covid-positive children, but they are not necessarily coming in with Covid symptoms," Owensby said. The kids are coming in for some other treatment, she said, and are testing positive when they are screened.

That same effect is driving up case counts in Washington, DC, said Dr. Roberta DeBiasi infectious diseases chief at Children's National Hospital. Close to half of the Covid-19 tests being performed there.

And the affected children are not any sicker than they were when previous variants circulated. But there are definitely more kids with symptoms there than before, she said.

"We have just seen a striking increase in the both volume -- the number of tests that are positive, and the percent of tests that are positive," DeBiasi told CNN in a telephone interview. "We've had up to almost half of the tests -- 48% of the tests -- to be positive and that's much, much higher than in prior waves where it was more on the order of, at the most, 17%. And if we look at the raw numbers of positives, on the last wave, we were impressed by like 80 positives a day and we've had almost 200 positives on some days. So it's very, it's just very, very contagious."

These tests include children coming in with and without symptoms, community screening, and random screening of patients coming for other types of treatment, as well as testing of staff, DeBiasi said.

"If we look at the admissions to the hospital, that also has been more," she added. "So in prior waves we would have at the peak of those waves, we would peak out around 18 kids in the hospital." Now on some days as many as 30 children are being admitted, she said.

Statewide during the same period, there was a two and a half fold increase, from 70 admissions to 184.

Kids of all ages are vulnerable

All ages of children are affected, from babies to teenagers, the pediatricians agreed.

"We are seeing pretty much every age group. We are seeing infants to older teenagers. It is definitely across the board," Owensby said.

Owensby is worried about multisystem inflammatory syndrome in children, or MIS-C.

"We can see it as early as two to three weeks," she said -- but most cases start turning u eight to 10 weeks after kids are infected.

MIS-C is marked by inflammation of the heart and other organs and it is usually seen in children who were not terribly ill with Covid-19.

"The vast majority are asymptomatic," Owensby said. "The scary part was they were totally normal kids before that. They did not have underlying disease. They were perfectly healthy kids who showed up in heart failure and shock."

"You could have even mild symptoms -- a runny nose, a slight cough or even a fever, like any other respiratory virus," Owensby said. "You have to watch for symptoms -- exhaustion, an inability to play," she added.

Symptoms can be subtle, but MIS-C is serious.

"That is the thing about kids. They are fine until they are not. Then all of a sudden they are critically ill," Owensby said.

DeBiasi said she has seen no sign of an increase in MIS-C cases yet. "We have not seen a bump in MIS-C but we would not have expected that. It takes four to six weeks after the surge of any new variant," she said.

Parents need to keep an eye on their children and take care to protect them, Owensby advised.

"Go back to due diligence. Watch your kids' social distancing," she advised. They should wear masks when it's appropriate -- when they are indoors with other, unrelated people, for instance.

"Masks do not hurt kids," Owensby said. Younger children can have fun wearing masks and playing superhero, she said.

"The entire family should be vaccinated if they can," she added. Vaccinated parents and siblings can protect younger, unvaccinated children.