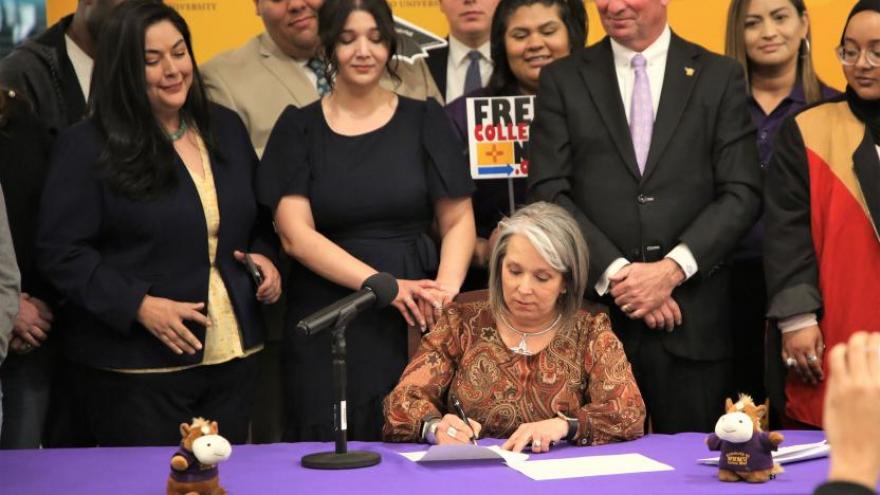 (CNN) -- For most New Mexico residents, college will now be officially tuition-free.

"For over a quarter of a century, New Mexico has been a national leader in providing free college to its residents. A fully funded Opportunity Scholarship opens the door for every New Mexican to reach higher, strengthening our economy, our families and our communities," Lujan Grisham said in a statement. "Signing this legislation sends a clear message to New Mexicans that we believe in them and the contributions they will make for their families and the future of our great state."

Eligible students must enroll in a minimum of six credit hours and maintain a grade point average of at least 2.5 during their time in college. The scholarship has already been awarded to more than 10,000 students over the last two years, but now $75 million has been allocated to the fund, according to a press release by the governor's office. That could support up to 35,000 students this fall alone, according to the statement, and allows part-time students and adult learners to take advantage, as well.

When Lujan Grisham first proposed making tuition free in 2019, many had questions.

New Mexico state Sen. David Gallegos, a Republican who at the time was on the state House Education Committee, said he did not support the plan because it was not "sustainable."

"Where do we take the money from? Public safety? Public education? I just don't know where we continue the money," he told CNN in 2019.

Gallegos voted against the bill in February during the state Senate vote.

Across the country, many states have moved to provide some sort of tuition-free college education, typically at the community college level. In 2019, California waived tuition for first-time, full-time students attending two years of community college -- expanding its existing California College Promise program. In 2021, North Carolina offered two years of free community college tuition to that year's high school graduates. And this year, the University of Texas System Regents established a $300 million endowment to expand tuition assistance programs across its seven institutions.

But completely free tuition at all levels of college has remained elusive. President Joe Biden has tried to completely waive tuition at just the community college level, with little success.