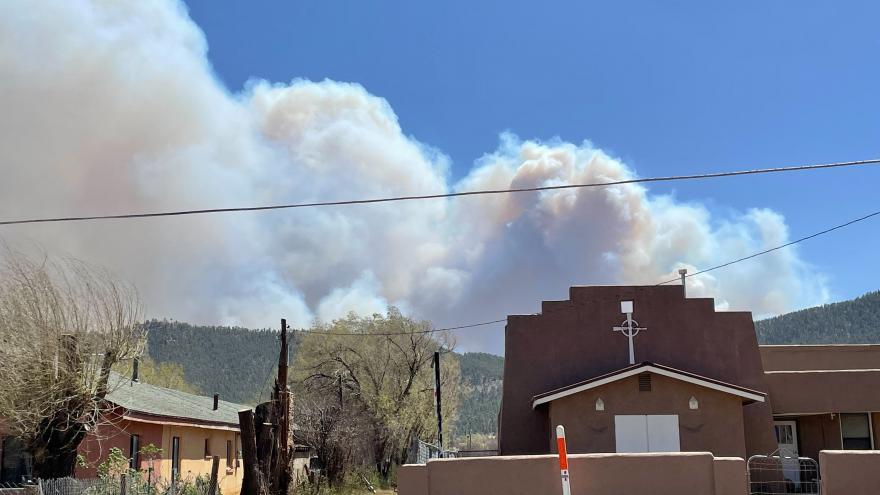 Red flag warnings -- issued when conditions are perfect for wildfires to start and to spread -- remain in place across much of the Calf Canyon and Hermits Peak fire zones as shifting winds, increasing temperatures and little change in humidity "challenge established firelines in several directions," according to an update from InciWeb, a US clearinghouse for wildfire information.

The fire, which started April 19 and then combined with the Hermits Peak fire, had burned almost 104,000 acres as of Sunday and was 30% contained, according to InciWeb.

Officials in northern New Mexico urged residents in more than two dozen communities to immediately evacuate Saturday ahead of the massive blaze, after it exploded in size within a day.

"This emerging situation remains extremely serious and refusal to evacuate could be a fatal decision," officials said in the release.

Authorities in San Miguel and Mora County are asking residents within the fire area to "remain on high alert for changes to evacuation statuses and road closures," the Sunday InciWeb report said.

Officials also warned of unhealthy air quality for sensitive groups in the Las Vegas, New Mexico, area as smoke drains into the valley, the report said.

According to the report, six scooper planes and eight helicopters will continue air operations to slow the rate of fire spread and aid firefighters on the ground.

The peak of the fire season in New Mexico is not until June, but amid a multiyear drought in the West, wildfires have already burned more acres in the state so far this year than in seven of the last eight years, according to statistics from the Southwest Coordination Center.

A little further north of the Calf Canyon Fire, the Cooks Peak Fire has burned through more than 59,000 acres. It was 69% contained Sunday, according to InciWeb.