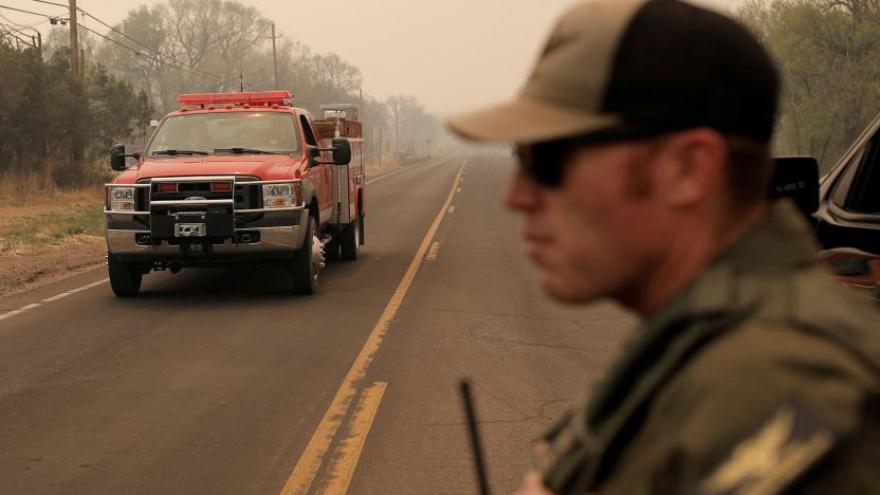 New Mexico governor asks Biden for more wildfire help: 'I have 6,000 people evacuated. I have families who don't know what the next day looks like'.

(CNN) -- New Mexico's governor has asked for a presidential disaster declaration to help get more money into her state as it battles the largest wildfire burning in the US.

Seven wildfires are burning in New Mexico -- the most in any state, according to the National Interagency Fire Center.

Those fires have torched more than 223,979 acres, including more than 160,000 acres charred by the largest inferno -- the combined Hermits Peak and Calf Canyon fires, which merged more than a week ago.

New Mexico is directing emergency dollars to fight the fires, but it's not enough, Lujan Grisham said Wednesday.

"I have 6,000 people evacuated. I have families who don't know what the next day looks like. I have families who are trying to navigate their children, their own health care resources, figure out their livelihoods, and they're in every single little community," she said.

A presidential disaster declaration would unlock resources "for watershed recovery, restoration of all of those wildlands and personal direct financial reparation and assistance before the fire is out," said Lujan Grisham.

"The President is very clear that that is coming, and we have every indication that we will be the first state to be able to advance this request and unlock these resources for New Mexicans," said Gov. Michelle Lujan Grisham.

More than 15,000 homes could be threatened this week if the combined Hermits Peak/Calf Canyon Fire continues to grow, a spokesperson for the Southwest Incident Management Team said Tuesday.

"One house lost to one New Mexico family is too many," the governor said. "We are very grateful for the work of the firefighters and fire responders."

With more than 160,000 acres scorched, the combined Hermits Peak/Calf Canyon inferno is the second-largest fire in New Mexico in at least 30 years.

About 300,000 acres have burned in New Mexico so far this year. That's more than the past two full years combined, CNN meteorologist Brandon Miller said.

Like much of the Southwest, New Mexico has been under a prolonged, severe drought, which has helped create critical fire conditions. April's fire weather conditions were the worst the state has seen in more than a decade.

The situation is "a long-term event," San Miguel and Mora counties said in a joint release Tuesday. "We don't anticipate having 'control' of this fire any time soon."