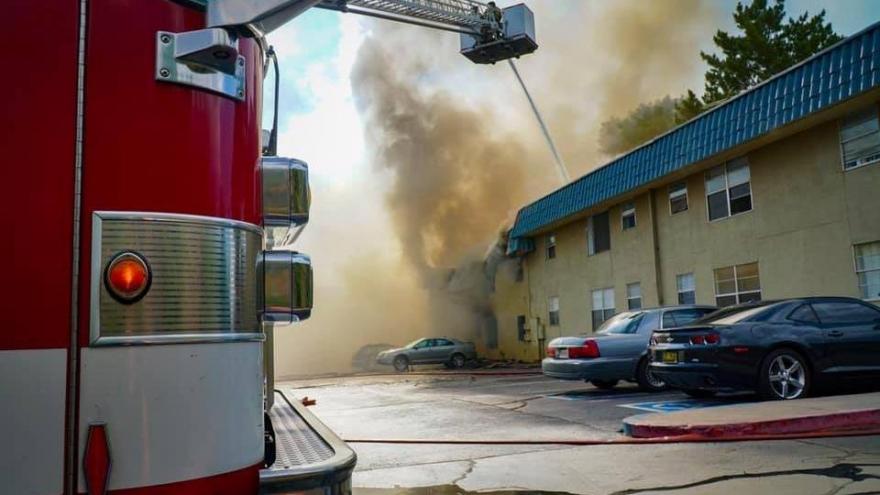 A construction worker in New Mexico is being called a hero after catching a baby and a toddler dropped from an apartment window during a fire.

(CNN) -- Mason Fierro is being hailed as a hero after catching a two-month-old baby girl and a toddler who were dropped from an apartment window during a fire in northeastern Albuquerque Friday.

The construction worker told CNN's Alisyn Camerota on Monday that he and others were putting a roof on the building next door when the flames broke out.

"We heard the father scream -- like a scream we have never heard before. When we heard that, we ran over as soon as possible," said Fierro. He ran toward the black smoke billowing out of the windows and there, on the second story of the apartment complex, a man was dangling a baby out the window.

Fierro, seeing the rest of the construction crew bringing ladders over, understood he had to act quickly and told the man to drop his baby.

The father was hesitant yet his "instinct" helped him "trust in us to help him and help his children," said Fierro.

"He dropped her. I caught her," Fierro said. "There was no doubt in mind that I would catch her."

Next, the father brought out his son, about 3 or 4 years old by Fierro's reckoning. With the help of his brother Jermaine Gallien, another construction worker on the site, Fierro also caught the boy.

Gallien told Camerota, "After we assisted that family, we went around the entire property, banging on doors and getting people out of there."

Lt. Tom Ruiz, a spokesman for the Albuquerque Fire Rescue, told CNN the fire sent three people to the hospital. The two children were taken to the hospital by family members and one person was taken by ambulance for smoke inhalation. All are in stable condition, Ruiz said.

The apartment complex was "a total loss," he said. The cause of the fire is under investigation.

Ruiz said even though firefighters were on scene within five minutes, he's glad Fierro and the other workers were quick to act.

"Those people were in dire need of rescue (and) weren't able to wait on us," Ruiz said.

Fierro said he shouldn't be the only one getting praise, though, because he couldn't have done it without the help of the rest of the crew.

"Those kids are alive because of what those construction workers did quickly and concisely," Ruiz said.

"That's something we'd like for them to leave to us," he said. "Those construction workers already had equipment. ... They made the decision to act and that can be more commended than anything else."

Asked if he felt any fear during his dramatic rescue, Fierro said "No, absolutely not. There was never a doubt in my mind that I would drop the children."

He said that credit is due to the others on the construction site that day -- "everybody who jumped into action with us," he said. "Not a word was spoken between any of us, we just knew what we had to do and we did it."

Fierro also believes divine intervention helped him save lives in the flames: "A couple seconds late, a minute late, it could have been a different story we're telling here," he said.