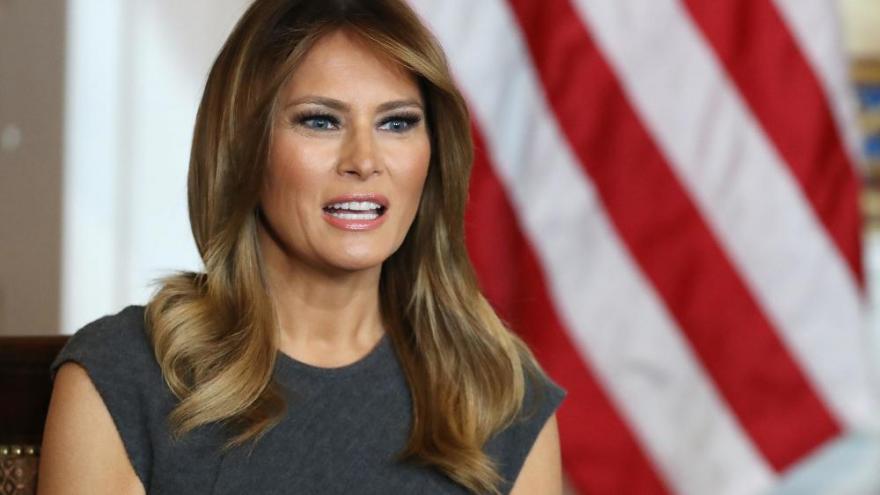 (CNN) -- Part of the reason first lady Melania Trump delayed her move from New York City to the White House in 2017 was because she was renegotiating her prenuptial agreement with President Donald Trump, according to a book out next week by a Washington Post reporter.

Author Mary Jordan cites sources close to Trump as saying her intent in doing so was to "amend her financial agreement with Trump -- what Melania referred to as 'taking care of Barron.' "

The book, titled, "The Art of Her Deal: The Untold Story of Melania Trump," is based on more than a hundred interviews, according to the Post.

According to the Post, the book said the first lady needed time to cool off after the President's alleged sexual indiscretions and Jordan writes that three people close to Trump say that this new prenuptial agreement ensured that Barron would not be shut out of the family business.

"She wanted proof in writing that when it came to financial opportunities and inheritance, Barron would be treated as more of an equal to Trump's oldest three children," writes Jordan.

Donald Trump has many times shared publicly his support of the idea of protecting one's wealth with a prenuptial agreement. He told CNN's Larry King in 1997: "I'm a big pre-nup believer, even though they're nasty terrible documents. I'm a big believer in that stuff."

A spokeswoman for the first lady dismissed the book and it's reporting.

"Yet another book about Mrs. Trump with false information and sources. This book belongs in the fiction genre," said Stephanie Grisham, Melania Trump's chief of staff.

Melania Trump's delay in moving to Washington, DC, was primarily concern for keeping life as normal as possible for her son, Barron, then 10 years old, after Trump won the presidential election. Her desire to allow Barron to finish his school year in New York City superseded other concerns about optics, political questions, or insinuations about her marriage.

As CNN has reported, Melania Trump does not have a cadre of seasoned political advisers telling her what to do, nor would she likely listen if so. She makes decisions based upon her own ideology.

She also found ground to renegotiate, Jordan reports, because Trump is aware, as are his adult children, she is a calming influence on the President.