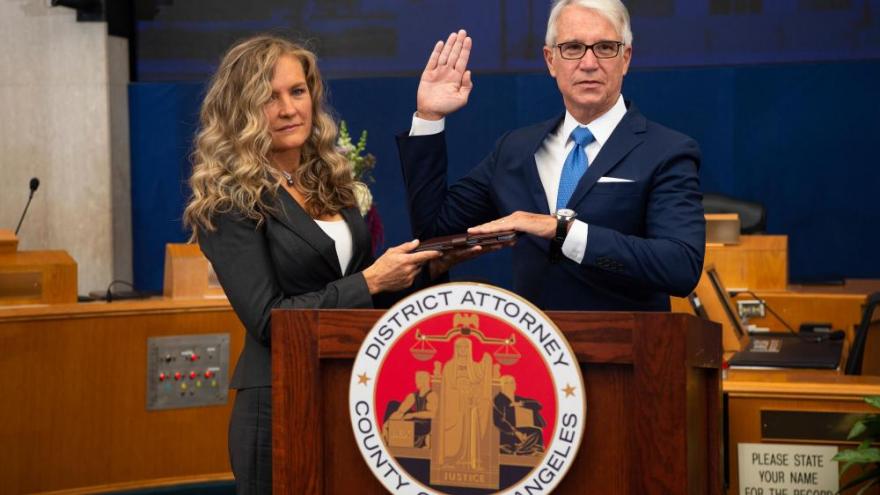 Incoming Los Angeles County District Attorney George Gascón is sworn in as his wife, Fabiola Kramsky, holds a copy of the Constitution.

Gascón defeated 8-year incumbent Jackie Lacey. As he assumed the head of the largest prosecutor's office in the nation Monday, he said his new agenda for Los Angeles -- which includes ending cash bail for certain minor offenses, the death penalty and the practice of charging juveniles as adults -- will differ from his predecessor's in order to better prevent crime, reduce recidivism, and restore victims.

"I recognize that these are big changes, but they are changes that will enable us to actually affect the truly vulnerable," Gascón said.

End to cash bail and the death penalty

Gascón announced he is immediately ending the cash bail system, adding that experts believe hundreds of incarcerated individuals would be eligible for released tomorrow under a new pretrial release policy. He said his office will also roll out a plan to eliminate all bail in the nation's most populous county beginning January 1, 2021.

"The money bail system is as unsafe as it is unjust," Gascón said. "The rich can be dangerous while the poor impose zero threat to society." The amount of money a person has in their bank account does not determine the danger they pose to their community, he added.

Criminal justice reform advocates have argued cash bail systems have unfair consequences on the poor. "Cash bail system criminalizes poverty, as people who are unable to afford bail are detained while they await trial for weeks or even months," according to the progressive advocacy organization Center for American Progress.

The union that represents Los Angeles police officers is also in opposition to Gascón's plan to end cash bail, calling the move "disturbing."

"As homicides, shooting victims, and shots fired into occupied homes soar in Los Angeles, it's disturbing that Gascón's first act in office is to explore every avenue possible to release from jail those responsible for this bloodshed," the Los Angeles Police Protective League said in a statement. "Victims and law-abiding residents lost a voice today while criminals and gang members gained an ally in the prosecutor's office."

Gascón also said his office of prosecutors will no longer be seeking the death penalty in any cases brought to his office. Instead, he pledged commitment to resentencing those currently on death row to life in prison.

"The death penalty does not make us safer," Gascón said. "It's racist, morally untenable, irreversible, and expensive. And today, it's off the table."

Among other proposed changes, the new district attorney said he will immediately end the practice of charging juveniles as adults, striking it down as "traumatic" and "dehumanizing when they're put in a concrete box."

Gascón, a former district attorney for the City and County of San Francisco and a former assistant chief of the Los Angeles Police Department, said he plans to reopen dozens of fatal officer-involved shooting cases dating as far back as 2012.

A 'Use of Force Review Board' made up of policing experts, civil attorneys and community members will be convened to help, Gascón added.

In an unprecedented effort, Gascón also said his office will begin reevaluating all sentences in Los Angeles County of anyone who has served more than 20 years in state prison because they are at low risk to reoffend. He will also end the use of sentencing enhancements, which typically add more time behind bars for people who are gang members or those who used a firearm during the crime, he said.

"Punishment must be proportional and in the community's best interest. It must serve as a rehabilitative and restorative purpose," Gascón said.