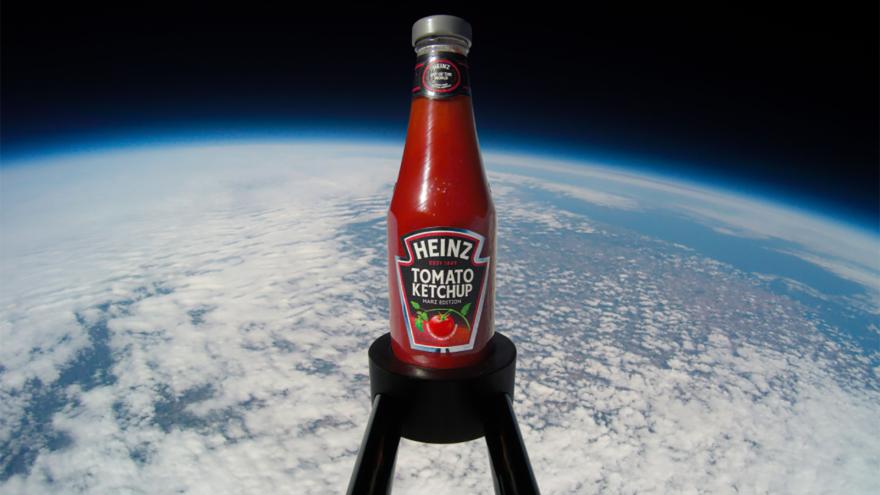 (CNN) -- First came the billionaires, then the movie stars -- now ketchup is making its mark on the space race.

Heinz revealed its first "Marz Edition" ketchup with tomatoes produced on Earth in Mars-like conditions. A team of 14 astrobiologists worked for nine months at the Aldrin Space Institute at the Florida Institute of Technology, growing tomatoes in a controlled environment with soil, temperature and water conditions similar to Mars.

Former NASA astronaut Mike Massimino said ketchup made from conventional Earth tomatoes has been a staple condiment in space to spruce up dehydrated meals, but the Marz Edition variety has implications that go far beyond flavor. The experiment, which has been two years in the making, demonstrates the possibility of long-term food production on Mars.

"Before now, most efforts around discovering ways to grow in Martian-simulated conditions are short-term plant growth studies. What this project has done is look at long-term food harvesting. Achieving a crop that is of a quality to become Heinz Tomato Ketchup was the dream result and we achieved it," said Andrew Palmer, who led the team at the Aldrin Space Institute at Florida Tech.

NASA has also experimented with plant harvesting in space to provide astronauts with more nutrients for their freeze-dried diets. (Apparently, the human body can't survive off freeze-dried ice cream.) The International Space Station recently hosted a taco party after harvesting the first chile peppers on the station -- ketchup could be the taco party's next guest. There has been discussion of sending a tomato-growing experiment to the space station, said NASA astronaut Shane Kimbrough on Friday.

The research team and Massimino will be the first to taste final product on Nov. 10 at 10 a.m. ET. You can watch the historic event on Heinz's social media channels, such as Twitter and Instagram.

The Martian ketchup is not available for purchase, but if you ever find yourself heading to Mars, that might be one thing you don't have to pack.