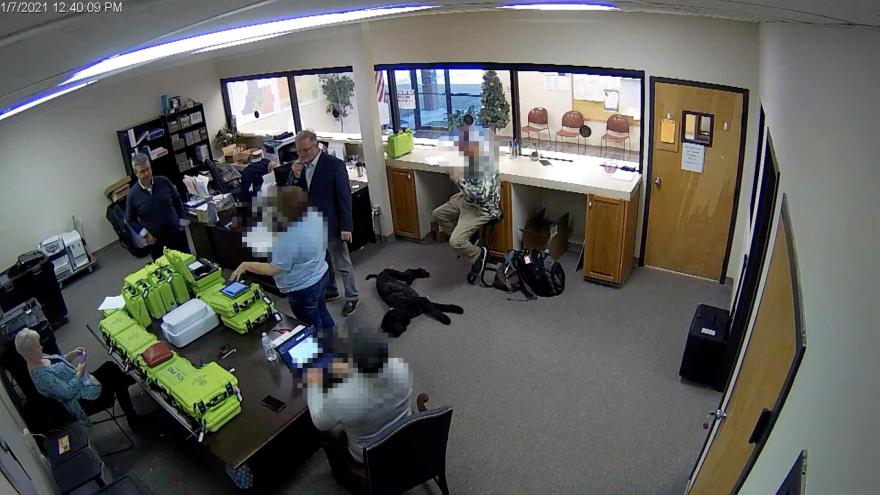 Newly obtained surveillance video shows a Republican county official and a team of operatives working with Trump 2020 attorney Sidney Powell inside a restricted area of the elections office in Coffee County Georgia.

(CNN) -- Newly obtained surveillance video shows for the first time what happened inside a Georgia county elections office the day its voting systems are known to have been breached on January 7, 2021.

A Republican county official in Georgia and operatives working with an attorney for former President Donald Trump spent hours inside a restricted area of the Coffee County elections office that day. Among those seen in the footage is Cathy Latham, a former GOP chairwoman of Coffee County who is under criminal investigation for posing as a fake elector in 2020.

CNN previously reported that Latham escorted operatives working with former Trump lawyer Sidney Powell through the front door of the elections office on January 7, 2021. The new footage appears to undercut previous claims by Latham that she was not "personally involved" in the breach.

The new video, obtained as part of a years-long civil lawsuit in Georgia related to the security of voting systems there, shows Latham remained in the office for hours as those same operatives set up computers near election equipment and appear to access voting data.

The footage also features the two men Latham escorted into the building earlier that day, Scott Hall and Paul Maggio, both of whom have acknowledged they were part of a team that gained access to Coffee County's voting systems.

Maggio did not respond to CNN's request for comment. The data firm he works for, SullivanStrickler, which court documents show was hired by Powell, previously said in a statement to CNN that it was "directed by attorneys to contact county election officials to obtain access to certain data" in Georgia and also "directed by attorneys to distribute that data to certain individuals."

In an August 29, 2022 email, an attorney for SullivanStrickler acknowledges that Latham was the "primary point of contact" in coordinating the team's visit to Coffee County.

The firm said it had no reason to believe these attorneys would ask or direct it to "do anything either improper or illegal."

A lawyer representing Latham pushed back on the claim she was the primary point of contact for the SullivanStrickler team, telling CNN that the calls she can be seen in the video making are not with anyone from the firm.

A second lawyer representing Latham, Bob Cheeley, previously told CNN, "Cathy Latham has dedicated significant time and effort over many years protecting the integrity of elections in Coffee County, Georgia. She would not and has not knowingly been involved in any impropriety in any election."

Hall, an Atlanta bail bondsman and Fulton County Republican poll watcher, did not reply to repeated requests for comment from CNN.

The new video also shows a third operative, Jeffery Lenberg, entering the restricted server room inside the Coffee County elections office more than two weeks later on January 26. Lenberg is under criminal investigation by the Michigan state attorney general in connection to a series of voting system breaches there.

Also gaining access to the Coffee County elections office in late January 2021 was Cyber Ninjas CEO Doug Logan, who oversaw the partisan election audit in Maricopa County, Arizona, and is also a target of the Michigan criminal investigation.

According to court documents, Logan and Maggio are part of a team that gained access to voting systems in Antrim County, Michigan at the end of 2020 -- ultimately leading to a since-debunked report on Dominion voting system vulnerabilities that remains at the center of baseless claims about widespread voter fraud pushed by Trump and his allies.

Surveillance video from the exterior of the building shows Logan visited the Coffee County elections office more than once in January 2021, roughly two weeks after the breach took place. CNN has reached out to attorneys for Logan.

Lenburg has not denied visiting the Coffee County elections office but claimed on an internet show last week that he and Logan only helped "direct" the "testing" of voting systems there.

"We didn't do the testing. We just helped direct it. We actually didn't touch the equipment. Doug Logan and I," he said, adding that they just provided instructions to two Coffee County elections officials who handled the equipment at their direction.