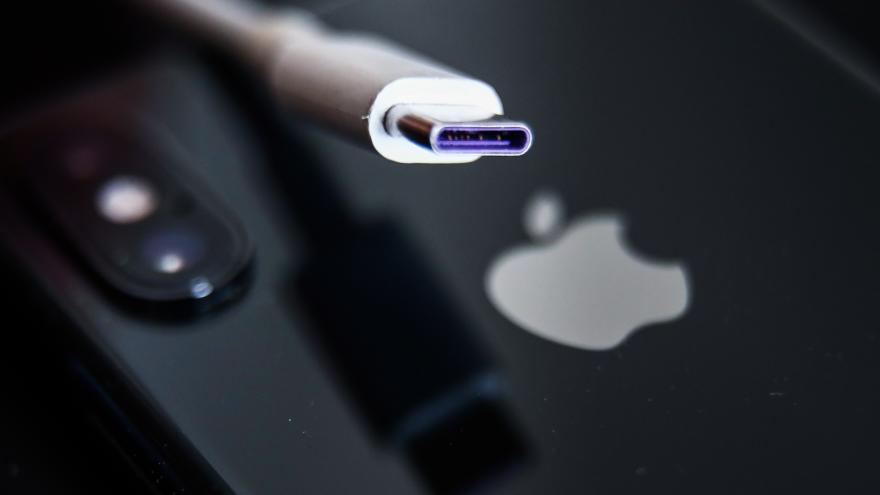 (CNN) -- Apple and other smartphone makers will be required to support USB-C as part of a single charging standard for mobile devices across the European Union by as early as the fall of 2024 under a new law announced Tuesday by EU officials.

The legislation is aimed at reducing e-waste and eliminating "cable clutter," said Margrethe Vestager, European Commission Vice President. Under the legislation, according to a release, "mobile phones, tablets, e-readers, earbuds, digital cameras, headphones and headsets, handheld videogame consoles and portable speakers that are rechargeable via a wired cable will have to be equipped with a USB Type-C port, regardless of their manufacture."

The coming rules will apply to new small and medium-sized electronics sold in the EU.

Chargers that support fast charging will also be required to adopt the same charging speeds. The measure does not affect wireless charging technologies, and consumers would have to be able to buy a device without a bundled charger if they choose.

The new rule stands to bring major changes for Apple users. Apple didn't immediately respond to a request for comment. But during the legislative process, Apple told EU officials that the proposed rule would render obsolete as many as a billion devices and accessories that use the company's proprietary Lightning connector, according to an EU Parliament report.

A 2021 study cited in the same report found that iPhones with the Lightning connector accounted for 18% of new mobile phone sales in 2019, with 44% using USB-C and 38% using the older USB Micro-B connector.

The writing has been on the wall for the end of Apple's Lightning connector for some time. Apple already uses the USB-C standard in some Macs and iPads and is reportedly testing iPhone models that swap out the Lightning port. But Tuesday's announcement could accelerate Apple's shift to USB-C and potentially lead to the company dropping Lightning around the world for good.

Efforts to mandate a single standard for charging in Europe date back more than a decade. Officials at one point had secured industry support for the USB Micro-B standard, but a voluntary agreement among major manufacturers to that effect expired in 2014 and was not replaced. The coming law to require USB-C, by contrast, is among the first of its kind.

Tuesday's announcement followed trilateral negotiations by the European Commission, Parliament and Council. The charging measure must still receive final approval before going into effect, but the process is largely considered a formality.