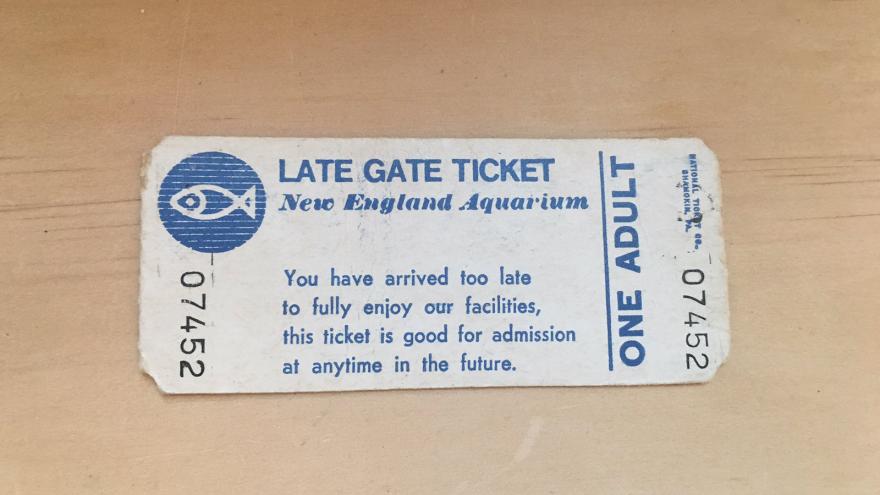 (CNN) -- When Rachel Carle moved to Boston for college, she received a surprising gift -- a ticket to the New England Aquarium that had been in her great-aunt's wallet for nearly four decades.

Issued in 1983, the "late gate" tickets were given out to visitors who arrived too late in the day to enjoy the aquarium but were able to return on another day and make it up. The aquarium stopped issuing the tickets about 25 years ago, but when Carle arrived on June 11, aquarium staff agreed to honor her ticket and allow her entrance.

Carle shared a picture of the ticket on her Twitter account and thanked the aquarium for their generosity. The tweet went viral, garnering more than 2,500 likes.

"I walked up to the ticket office and explained the story of the ticket," Carle told CNN Travel. "They took a look at the ticket, laughed, and said 'well, it says come back any time! There's no expiration date!'

"I didn't know what to expect! I promised my great aunt Kit I would try; whether they honored it or not, she and I would have been glad just to see the story through. We're so glad they honored it!"

Today, a ticket to the New England Aquarium costs $32 for adults and $23 for children.

Now, Carle has a sweet story to share and happy memories of her trip to the aquarium. But she may soon have a more permanent reminder of the experience.

Her great-aunt actually had two of the "late pass" tickets, so Carle is planning to have the other one mounted and framed as a souvenir.

And Carle isn't the only person who has been able to use an expired ticket to gain admission to an attraction.

In 2019, Disneyland honored Canadian woman Tamia Richardson's1985 free entry pass, which she had won in a contest. She got the ticket as a teenager and returned as a mom of two who still loved all things Disney -- extra so now.