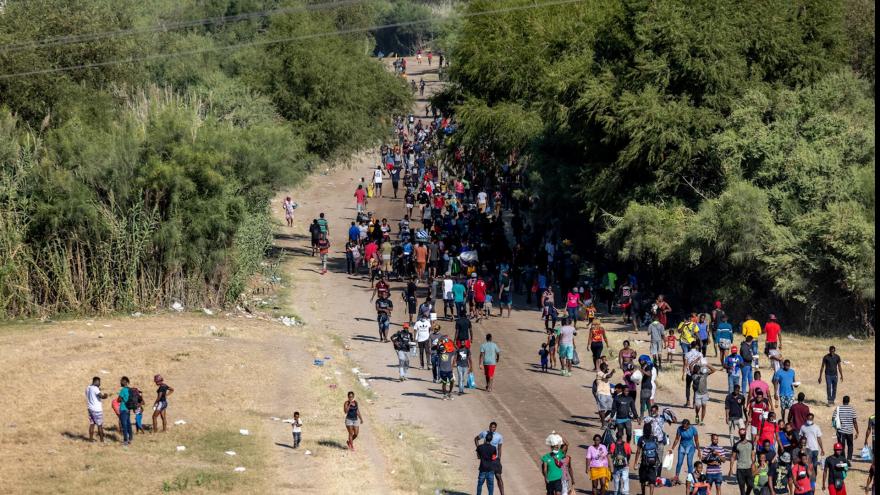 The Department of Homeland Security is setting up a new intelligence gathering and law enforcement unit to monitor the movement of migrants journeying to the US southern border after being caught by surprise last month when thousands of people arrived in Del Rio, Texas.

(CNN) -- The Department of Homeland Security is setting up a new intelligence gathering and law enforcement unit to monitor the movement of migrants journeying to the US southern border after being caught by surprise last month when thousands of people arrived in Del Rio, Texas.

The initiative is aimed at improving the department's operational ability to prepare for potential migrant surges, according to DHS. The cell, first reported by NBC, is expected to be operational by the end of the month, according to a Homeland Security official.

"DHS recently developed a new analytic effort that combines law enforcement and intelligence resources to improve our ability to operationally prepare for large numbers of migrants that may arrive along the southwest border," a DHS spokesperson said in a statement.

DHS will increase collection of fingerprints and potentially other biometric information, with the help of foreign partners, as migrants travel to the US, the official added.

In addition to increased law enforcement activity, the effort is intended to allow for the prepositioning of resources, including screeners and transportation.

It will be led by the DHS Office of Intelligence and Analysis, Customs and Border Protection, Immigration and Customs Enforcement and the United States Coast Guard. Agencies are also expected to work with personnel in the region, the official added.

The cell will work on a daily basis to analyze information coming from DHS components, other federal entities, state and local sources, foreign governments, as well as imaging and online platforms to better anticipate events such as Del Rio and address them as needed, according to a law enforcement official familiar with the planning.

Similarly, DHS is improving communication and coordination with countries in the region, like Mexico, Haiti, El Salvador, Guatemala, and Honduras. In some cases, those efforts may include expanded information sharing agreements with foreign countries to improve intelligence gathering, the official said.

"Often times foreign governments may have information relating to large-scale movement of migrants heading to the US. We need to be able to effectively gather that and analyze it," the official said.

The new unit comes weeks after administration officials were caught off guard by an influx of migrants -- many of them Haitian -- who converged under a bridge in Del Rio, Texas, leaving officials ill-prepared to manage needed housing, transportation and processing.

"All year there's been constant flow across the border," a CBP official told CNN about the Del Rio situation. "We have been consistently overcapacity ... but there was no sense that 20,000 people were going to show up in a matter of days."

"Obviously, there is better situational awareness in Mexico needed. I don't believe that nobody noticed 120 buses," the official said. "I know that we did not see it until it materialized."

DHS had been closely following the movement of migrants through the hemisphere and working with law enforcement partners in transit countries, according to another Homeland Security official, but the administration didn't anticipate the pace at which people would arrive, some of whom had been moving by bus instead of walking.

DHS will use the new team of intelligence and law enforcement staff to improve monitoring of groups and strengthen programs like Operational Sentinel -- an anti-smuggling operation designed to map the criminal organizations' networks, as well as target their members, associates and assets, according to the DHS spokesperson.