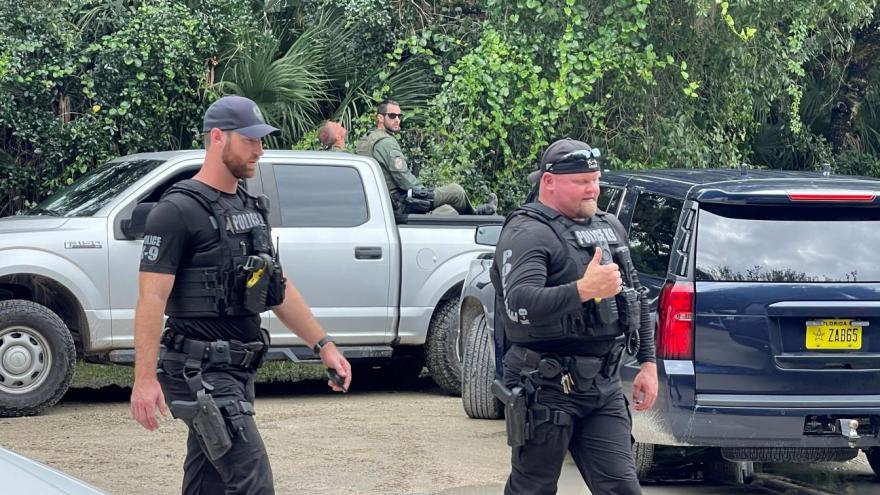 Police and the FBI search for Brian Laundrie in the Carlton Reserve in Florida.

(CNN) -- The search for Brian Laundrie, who according to a source left behind his wallet and cell phone when last seen departing his parents' home 10 days ago, ended on Friday at a nature reserve in southwestern Florida and will resume on Saturday, as new details emerged about the case.

Laundrie is now the subject of a federal arrest warrant for events following the death of fiancée Gabby Petito, whose remains were found Sunday in Wyoming.

The US District Court of Wyoming issued a warrant for Laundrie, according to the FBI's Denver field office, after a grand jury indicted him for his "use of unauthorized devices" after Petito died.

Laundrie used a debit card and PIN number for accounts that did not belong to him for charges totaling more than $1,000 between the dates of August 30 and September 1, according to the indictment.

An attorney for Laundrie's family emphasized that the warrant was not for Petito's death but related to activities that took place afterward.

"It is my understanding that the arrest warrant for Brian Laundrie is related to activities occurring after the death of Gabby Petito and not related to her actual demise," Steve Bertolino said in a statement. "The FBI is focusing on locating Brian and when that occurs the specifics of the charges covered under the indictment will be addressed in the proper forum."

FBI Special Agent in Charge Michael Schneider said, "While this warrant allows law enforcement to arrest Mr. Laundrie, the FBI and our partners across the country continue to investigate the facts and circumstances of Ms. Petito's homicide. We urge individuals with knowledge of Mr. Laundrie's role in this matter or his current whereabouts to contact the FBI."

Local and federal officials searched again Friday for any signs of Laundrie in the Carlton Reserve, a roughly 25,000-acre nature preserve near his parents' home in North Port.

Law enforcement began their search of the area after Laundrie's family told police last Friday that he had not been seen for days and that Laundrie told them he was headed to the reserve before not being heard from again.

The arrest warrant announced Thursday "doesn't change anything for us," Fussell said. "We're working as hard to find him now as we did on day one."

The conditions investigators have been working in is seen in videos shared Friday by the North Port Police Department, which show murky water, muddy roads and thick vegetation.

"Rough is an understatement," North Port police spokesperson Josh Taylor said Thursday of the conditions in the reserve.

As the "major" part of the search ended Friday, Taylor said Saturday's and Sunday's efforts will be focusing on "areas of more likelihood."

Law enforcement won't be providing regular updates unless something of note is found over the weekend, Taylor said.

On Thursday, a source close to the Laundrie family told CNN's Chris Cuomo that Laundrie left his parents' home without his cell phone and wallet on the last day they reported seeing him.

Laundrie's parents were concerned that he might hurt himself, the source said.

Taylor declined to comment to CNN on the report, saying, "I cannot give any statement to a timeline at this time. That investigation is being conducted by the FBI."

The FBI did not immediately respond to a request for comment.

Tensions between the couple may have mounted, others say

Witnesses are providing additional details about Petito and Laundrie in the lead up to their disappearances.

A couple from Louisiana vacationing in Jackson, Wyoming, says they saw an incident last month in a restaurant involving Petito and Laundrie.

Nina Angelo and her boyfriend, Matt England, saw a "commotion" as Petito and Laundrie were leaving The Merry Piglets Tex-Mex restaurant, Angelo told CNN on Wednesday.

Petito was in tears and Laundrie was visibly angry, going into and out of the restaurant several times and continuing to show anger toward the staff around the hostess stand, Angelo said. The couples' waitress was also visibly shaken by the incident, according to Angelo, who told CNN she did not see any violence or physical altercation between Petito and Laundrie.

A manager at Merry Piglets, who declined to give her name, did see "an incident" at the restaurant on August 27 and called the FBI on Wednesday, she told CNN. The manager declined to describe what happened and said the restaurant did not have surveillance video of the incident.

Earlier in August, police in Moab, Utah, had an encounter with the couple, where officers describe them as having "engaged in some sort of altercation."

Although the two are described as getting into a physical fight following an argument, "both the male and female reported they are in love and engaged to be married and desperately didn't wish to see anyone charged with a crime," a report from officer Eric Pratt says.

Petito and Laundrie had posted online regularly about their travels with the hashtag #VanLife as they ventured out west, but those posts abruptly stopped in late August.

Petito's family told police they were last in contact with her during the last week of August, North Port police say. Laundrie returned to the couple's home, where his parents also live, on September 1, according to police.

Petito was reported missing September 11 after her family had not been able to get in touch with her.

Her remains were discovered on September 19 in Wyoming's Bridger-Teton National Forest and were identified by a coroner two days later, according to the FBI.

"The cause of death remains pending final autopsy results," the FBI said.

A memorial visitation for Petito is planned for Sunday afternoon in Holbrook on Long Island in New York, according to Moloney's Holbrook Funeral Home. It will be open to the public.

Richard Stafford, an attorney for Petito's family, confirmed in a statement Friday her funeral would be held Sunday, adding that the family has asked for donations to be made to the future Gabby Petito Foundation in lieu of flowers.

On Wednesday, a small crowd gathered in Salt Lake City to mourn the death of Petito.

"We won't forget about you. We won't let your light dim," vigil organizer Serena Chavez said before the group.

"We will remember other women or children who are missing," Chavez continued. "Their families are devastated, and I can only imagine what Gabby's family is going through."