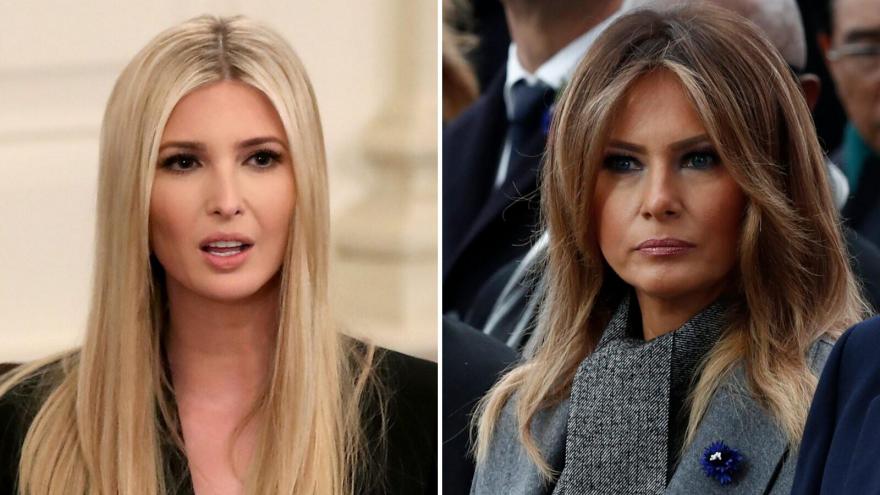 In her forthcoming book, "Melania and Me: The Rise and Fall of My Friendship with the First Lady," Wolkoff details the painstaking efforts she and, allegedly, Melania took to block Ivanka from appearing in photos of President Donald Trump's swearing in at the inauguration, according to an excerpt published Wednesday in New York Magazine.

Wolkoff wrote, "We were all exhausted and stressed out. Yes, Operation Block Ivanka was petty. Melania was in on this mission. But in our minds, Ivanka shouldn't have made herself the center of attention in her father's inauguration."

Wolkoff, a former director of special events for Vogue magazine who oversaw events like the Met Gala and helped organize events around Trump's inauguration, has known Melania for more than a decade. She was Melania's first hire in the East Wing and worked unpaid as a special government employee. But it proved to be a brief stint. As investigations into inaugural activities progressed, the eye-popping sum Wolkoff's firm was paid -- nearly $26 million -- caused a rift with the Trump family.

All but $1.6 million of that payment went to subcontractors and vendors. In February 2018, the East Wing announced it had "severed the gratuitous services contract with Ms. Wolkoff."

The excerpt from Wolkoff's new book details the bad blood between Melania and Ivanka -- whom Melania, according to Wolkoff, has referred to as "Princess."

An administration official took aim at Wolkoff's character, saying her behavior was "the complete opposite of Mrs. Trump's style."

"She inflated her relationship with the first lady," along with other behaviors that irked the East Wing, the official said. The official added, "it had to be brought to Mrs. Trump's attention -- who does not tolerate that kind of behavior."

Wolkoff claimed that Ivanka and her husband Jared Kushner, both White House staffers, were always on the lookout for opportunities to diminish and "control" Melania, even trying to snap up office space in the East Wing during the presidential transition.

"Ivanka was relentless and was determined to be the First Daughter Lady and to usurp office space out from under Melania; she wanted to be the only visible female Trump on the premises," Wolkoff wrote.

A transition source disputed the notion that Ivanka was ever on the hunt for East Wing office space, saying Ivanka was always set on working on policy issues from the West Wing. "The idea that she was trying to take over the East Wing, I know it's been written a million times, that doesn't make it any more true," the source said.

Wolkoff also took a swipe at Ivanka over her use of a private email server for official business.

"Ivanka was asking her work contacts at the White House to write to her at her private email — the exact offense the Trumps had lambasted Hillary Clinton for during the general election," Wolkoff wrote. "Would anyone chant 'Lock her up!' about Ivanka's private server? Doubtful. The email thing was hypocritical, to say the least. But the Trumps made their own rules."

Representatives for Ivanka said at the time that she used a private server before she was briefed on the rules and that none of her messages contained classified information.

The short preview of the book also reveals the slapdash efforts to throw together an inaugural committee.

The attorney general in Washington, DC, sued the Trump inaugural committee earlier this year for abusing nonprofit funds. Officials in the Southern District of New York are also investigating.

Wolkoff wrote that Rick Gates -- the former deputy campaign chairman who would go on to plead guilty to financial crimes and cooperate in special counsel Robert Mueller's investigation -- had complete access to Trump Tower. Meanwhile, according to Wolkoff, Donald Trump didn't even seem to realize Gates was at the helm of inaugural planning.

According to the excerpt of book, Trump proclaimed, "I want Rick fired right now! That b------." And then promptly turned around and tapped John McEntee -- a "25-year-old body man" -- to run inauguration efforts.

Trump "told the kid to sit down. 'You're in charge of the inauguration now,'" Wolkoff wrote. "I couldn't tell if Donald was serious about tapping the 25-year-old body man to be the new deputy chairman of the (Presidential Inaugural Committee). He looked like he was just out of college."

McEntee never did take the helm of the inauguration efforts.

As for Wolkoff, she received a subpoena last year regarding her work with the inauguration. Her book is due out September 1.

CORRECTION: This story has been corrected to reflect that the excerpt was published on Wednesday.