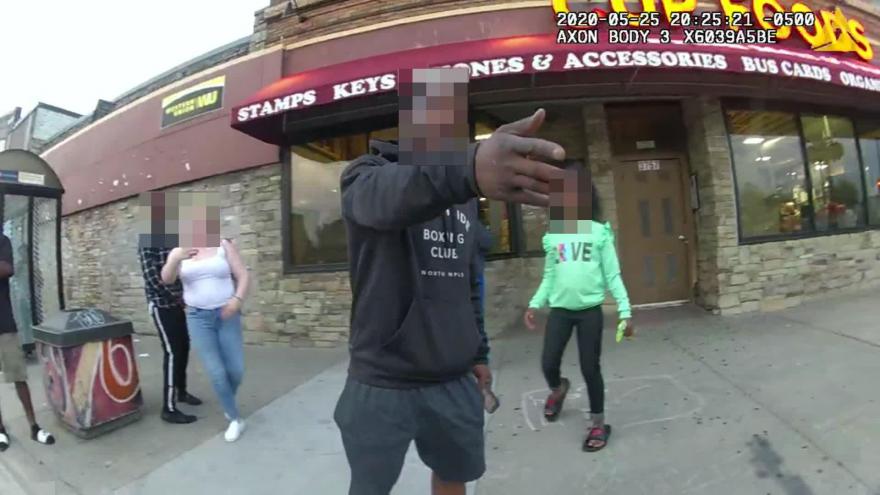 CNN has blurred the faces of bystanders to protect their identities.

(CNN) -- Newly released police bodycam footage from the fatal arrest of George Floyd shows a crowd of bystanders becoming increasingly upset as police hold down the 46-year-old Black man, pleading with officers to get off of him and check his pulse.

The video from the body camera of former Minneapolis police officer Tou Thao was released Thursday by the Hennepin County Court. Thao was seen in earlier videos of the incident standing by as three other officers restrained Floyd after he was accused of trying to pass a fake $20 bill at a Minneapolis convenience store on May 25.

The footage is just the latest to show the fatal encounter, which, along with Floyd's death, sparked widespread protests and a renewed nationwide reckoning over race and policing. Earlier this week, two other videos from police body cameras worn by officers Thomas Lane and J. Alexander Kueng were released showing the struggle between Floyd and the officers.

Throughout the new 22-minute video, bystanders are seen and heard begging the police to get off Floyd as Officer Derek Chauvin kneels on the his neck. But Thao dismisses their concerns, telling them that Floyd is okay.

Chauvin, a White officer, knelt on Floyd's neck for nearly 8 minutes, even as Floyd repeatedly cried, "I can't breathe." Chauvin has been charged with second-degree murder and second-degree manslaughter.

None of the officers has entered a plea in the case, though attorneys for Thao and Lane have requested their cases be dismissed, and Kueng intends to plead not guilty, according to his attorney.

Attorneys for Chauvin and Kueng declined to comment when asked about the new footage. CNN has also contacted lawyers for Thao and Lane for comment and is awaiting responses.

The footage begins as Thao and Chauvin approach the scene, where Kueng and Lane are trying to get a handcuffed Floyd into the back of a patrol car.

Thao watches the other three officers struggle with Floyd, who is audibly and visibly distraught. Chauvin appears to have his arm around Floyd's neck. By this time, Floyd can be heard yelling that he can't breathe several times.

Seconds later, the officers lay Floyd on the ground beside the patrol car and restrain him in the same position he was in when a 17-year-old bystander began filming Floyd's final moments. It's known from other videos that Chauvin is kneeling on Floyd's neck, though it's not explicitly seen in the video captured by Thao's bodycam.

Bystanders gather on the sidewalk, watching the incident unfold. Some film the arrest with their phones, while others confront the officers and express concern for Floyd, who cries out for his late mother and soon says his final words: "I can't breathe."

"This is why you don't do drugs, kids," Thao says.

"He's talking, so he's fine," Thao tells the crowd, later adding, "It's hard to talk when you're not breathing."

One bystander, a Black man named Donald Williams, insists that Floyd is not okay. "Bro, he's not even f**king moving right now, bro."

A woman approaches, says she's a firefighter and asks Thao if Floyd has a pulse. Thao yells at her to "back off" and get on the sidewalk.

The bystanders become increasingly upset after Floyd stops speaking and moving, pleading with the officers to check for a pulse. More people begin gathering on the sidewalk, until about a dozen people are watching the arrest.

The back-and-forth between Thao and the crowd continues -- at times becoming physical as Thao pushes bystanders back onto the sidewalk -- until about 13 minutes into the footage. At that point, Chauvin appears from off camera. Floyd has already been loaded into an ambulance.

Floyd was taken to a hospital, where he was soon pronounced dead.