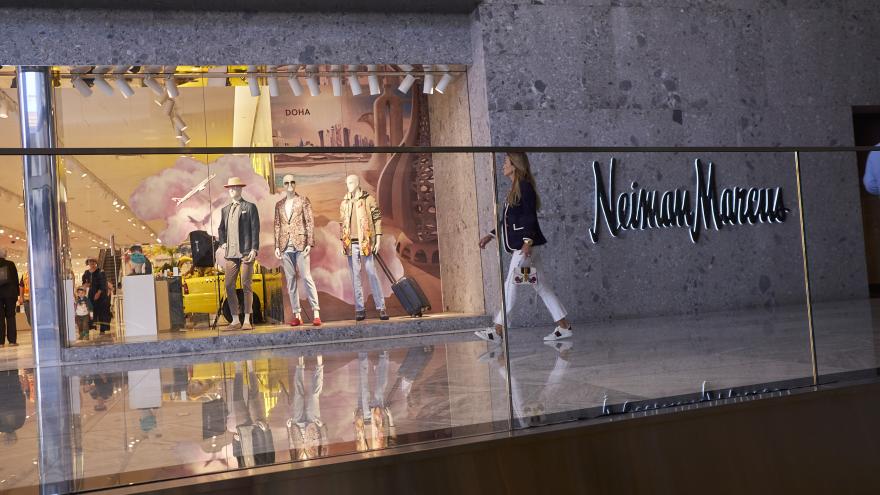 Neiman said in a statement that it entered into a restructuring agreement with creditors that will allow it to "substantially reduce debt and position the company for long-term growth." Neiman did not announce any store closings Thursday.

The company's history goes back 113 years to its first store in Dallas, which is still its home base. The company also operates the Bergdorf Goodman and Last Call chains, as well as a separate online outlet mytheresa.com, which is not included in the bankruptcy case, according to the company.

The company had 69 stores among the three brands as of last year, including a massive new store in New York City's new upscale Hudson Yards development. But in March, Neiman announced plans to permanently close a "majority" of its 22 Last Call stores.

A bankruptcy filing doesn't necessarily mean a company will go out of business. Many companies use bankruptcy to shed debt and other liabilities they can't afford while closing unprofitable operations and locations.

But this is a unique time for a retail bankruptcy filing. Many stores have been closed by quarantines and stay-at-home orders, and many potential shoppers are nervous about venturing out to any stores that are open. That makes surviving the bankruptcy process even more difficult. Many retailers have entered bankruptcy intending to stay in business but have failed to do so.

Longstanding problems before the coronavirus crisis

Neiman's problems go back well before the start of the crisis.

In addition to the trend against traditional department stores, its fate was very possibly sealed in 2013 when Ares Management and the Canada Pension Plan Investment Board paid $6 billion in a leveraged buyout, taking the company private.

Numerous retailers who have gone out of business in recent years were first purchased by private equity firms that took them private and ladled on an unaffordable amount of debt, including Toys "R" Us, Sports Authority, Payless ShoeSource and Gymboree.

"The big issue with Neiman's is that the [private equity] guys paid too much and layered on too much debt," said Steve Dennis, a retail consultant and former Neiman executive.

Neiman was forced to drop plans to go public once again in January of 2017 because of a weak market for its shares. It announced it was putting itself up for sale later that year but never found a buyer.

Neiman had nearly $5 billion of debt on its balance sheet as of a year ago,the last public filing to disclose the figure. Neiman reportedly missed a bond payment last week, signaling that the company was in danger.

And beyond the ownership and debt structure, Neiman has faced similar challenges to other department stores: Consumers have more options to buy clothes than ever before.

"Neiman's has struggled for a long time to acquire newer, younger customers," Dennis said. "There is too much luxury department store space chasing a stagnant segment."

The retailer "faces a significant uphill battle in the coming months to find its way out of bankruptcy," said Ukanwa. "This is likely just the beginning of retail bankruptcies in the coming months, especially for luxury retailers and those that don't have a strong online presence or infrastructure, like Neiman."

Nieman appeared to be headed in the right direction until the crisis hit. According to Debtwire, which tracks the finances of troubled companies, privately held Neiman posted improved adjusted earnings before interest and taxes, in the quarter that ended in January, the time frame that included the holiday shopping period. While sales at stores open at least a year had fallen 1.6% compared to a year earlier, its cash and available borrowing had increased to $439 million, up 24% from just three months earlier.

But that was the condition of the retailer with a strong US economy, with unemployment at a 50-year low and rising incomes and consumer confidence. Those conditions seem like a distant memory today, with a record number of US workers filing for jobless benefits after being forced out of work by the virus.

Neiman's bankruptcy filing is a sign of the strain the pandemic has placed on retailers. UBS analysts said last month that "retail store closures are likely to accelerate in a post-COVID-19 world" and that the gap between well-positioned retailers and struggling chains will expand because of the outbreak.

More consumers are shopping online rather than go to the mall, a trend that has hurt department stores. The sector has also been hit by the growth of big box discounters such as Walmart, Target and Costco, which provide shoppers not only lower prices but a selection of items not found in department stores, such as as groceries.

Another old-line retailer, JCPenney, announced on April 15 that it missed a debt payment due that day and that it is weighing its options during the 30-day grace period before it is judged to be in default of its loan.

Retail sales at clothing and accessories' stores plunged 50% in March. Like other retailers, Neiman announced on March 17 it was closing stores and furloughed its roughly 14,000 employees during the crisis.

"The pandemic recession is causing consumers to retract from luxury products and accelerating consumers' shift towards online retail," said Kalinda Ukanwa, assistant professor of marketing at the University of Southern California's Marshall School of Business.