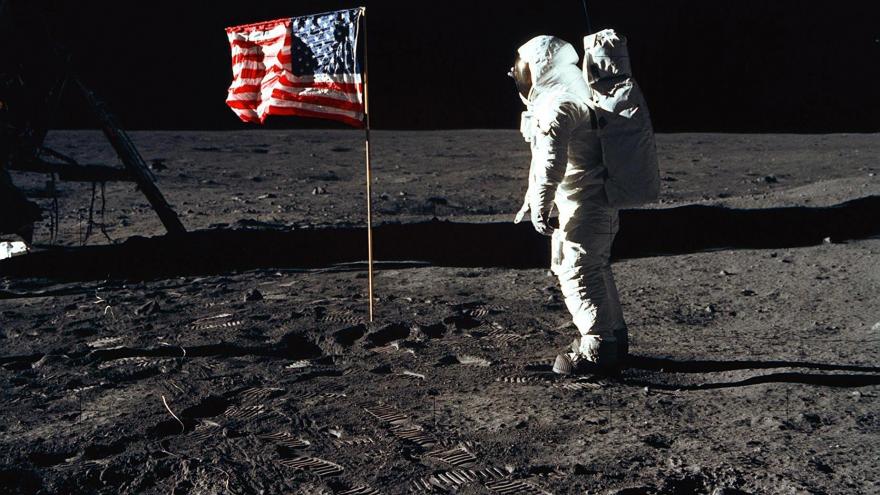 Edwin "Buzz" Aldrin poses for a photograph beside the United States flag on the lunar surface.

(CNN) -- History was made on this day more than half a century ago when two American astronauts walked on the moon.

A mission many doubted was possible became reality for Neil Armstrong -- the first man to walk on the moon -- and Edwin "Buzz" Aldrin, who joined him 19 minutes later.

Here are some facts about what happened 51 years ago Monday:

Apollo 11 became the first manned spacecraft to land on the moon.

During the widely televised event, the world watched and waited as the lunar module Eagle separated from the command module and began its descent.

Then came the words from Armstrong: "Tranquility base here, the Eagle has landed."

"That's one small step for man, one giant leap for mankind," the astronaut said as he took his first step on the moon's surface.

Armstrong's success did not come easily.

He took two trips into space. He made his first journey in 1966 as commander of the Gemini 8 mission, which nearly ended in disaster. He kept his cool and brought the spacecraft home safely after a thruster rocket malfunctioned and caused it to spin wildly out of control.

Three years later, at age 38, he became the first person to walk on the moon. Armstrong died in 2012 in Cincinnati, Ohio.

In July 1969, Armstrong, the mission commander, and fellow astronauts Buzz Aldrin -- the lunar module pilot -- and Michael Collins -- the command module pilot -- blasted off in Apollo 11 on a nearly 250,000-mile journey to the moon. It took them four days to reach their destination.

Armstrong was on the moon's surface for two hours and 32 minutes and Aldrin, who followed him, spent about 15 minutes less than that.

The two astronauts set up an American flag, scooped up moon rocks and set up scientific experiments before returning to the spacecraft. They also spoke to President Richard Nixon via radio from the Oval Office.

All three astronauts returned home to a hero's welcome, and none ever returned to space.

A challenge from President Kennedy

Eight years before the Apollo 11 mission, in May 1961, President John F. Kennedy had presented a bold vision before a joint session of Congress when he pledged to send a man to the moon by the end of the decade.

Some called his dream lunacy. Others viewed it as just another strategic move in the Cold War chess match between the United States and the Soviet Union. But Kennedy was determined.

"No single space project in this period will be more impressive to mankind, or more important for the long-range exploration of space; and none will be so difficult or expensive to accomplish," Kennedy said.