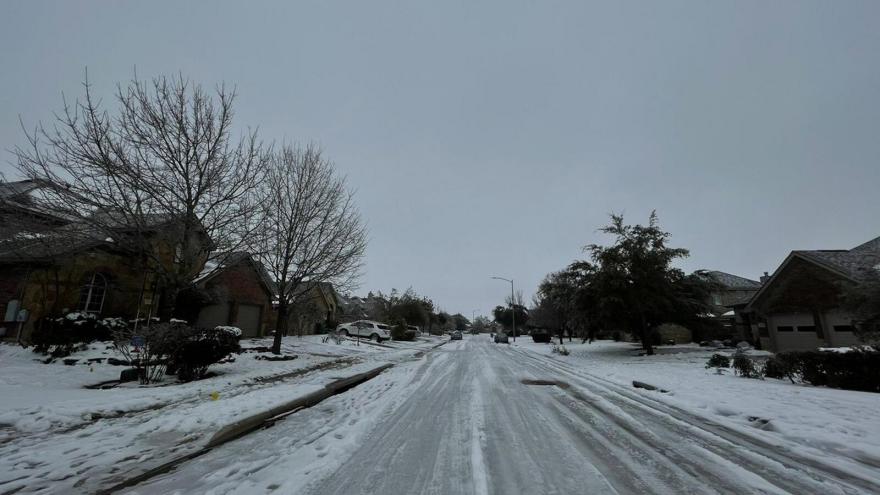 Escajeda said the storm has been mentally draining. The drive he took to Everett's house felt desolate, he said.

(CNN) -- Texans never could've dreamed of a week like this.

Since Sunday, the Lone Star state has weathered a winter storm so fierce it's broken several records, plunged Texas cities into subzero temperatures and knocked out power, water and warmth for millions of residents.

This improbably cold weather has tested Texans' mettle, and it hasn't let up yet.

Thank goodness, then, for the neighbors who are there to lighten the load.

People across the state who've been stuck at home have shared stories of kindness from neighbors they hardly knew and friends they didn't expect so much from.

Sometimes their aid comes in the form of an unexpected delivery of hot cocoa and Girl Scout cookies. Other times, it's a warm, dry place to stay for as long as you need it.

It's not easy to see the light when you've been cooped up in the freezing darkness for days on end. But it's a little easier to make it through the power outages and intense cold when you've got the force of a community behind you.

Karen Rambo-Hernandez and her family moved to their new College Station neighborhood in June, during the pandemic's summer swing. Rambo-Hernandez, an associate professor in the department of Teaching, Learning and Culture at Texas A&M University, said it was difficult to get connected to the community (Covid-19 made neighborly get-togethers nearly impossible).

Enter this week's record-breaking freeze. Rambo-Hernandez's home has been without power for most of the week, and her water was cut off Wednesday. But the outage helped connect her, after months of isolation, to other mothers in her neighborhood -- she joined them in a group text chain where they let each other know who's safe, who's out of power and who's checked on their other neighbors.

Rambo-Hernandez was tasked with knocking on Linda Kellogg's door, a few houses down from hers. Kellogg said she'd prepared cookies and hot chocolate for the children in the neighborhood, but the icy weather had kept all the kids inside.

After their check-in, Kellogg knocked on Rambo-Hernandez's door, a package of Ghirardelli hot chocolate mix and boxes of every Girl Scout Cookie flavor in tow.

Rambo-Hernandez's two children, bundled up in hats, scarves and oversized mittens excitedly retrieved the goods. She said Kellogg's surprise delivery was an example of "Texan hospitality at its best."

"I've personally appreciated the feeling of knowing we aren't alone," she told CNN. "I know I can count on these moms ... and my new neighbors."

They helped heat up houses

Eric Siner Jr. and his family in Cedar Hill were out of power for about two days, and the chill was starting to sting. It's the coldest he's ever been in his life, Siner told CNN.

A neighbor two houses down knew they were freezing and offered to hook them up to his generator so the Siner family could use a few heaters in their home.

After shivering through more than 48 hours, Siner excitedly took him up on his offer.

The Siners gave back to him, too: Once she lit the gas stove, Stiner's mother cooked a thank-you meal for the neighbor and his daughter.

Alicia Barr hadn't ever spoken to her neighbor before this week, though they'd seen each other in their driveways when they needed to warm up in their cars or charge their phones. So she was surprised when her neighbor offered her a ride.

Barr, who lives in Temple, had been preparing to join her parents in Belton, a city north of Austin. The drive wouldn't take long -- the cities are about 20 minutes away from each other -- but Barr's "little car was just not gonna make it," she told CNN.

Her neighbor saw her load, then unload, her car in the snow, so she stopped Barr and offered her a ride to wherever she was headed. Barr made it to her parents' home, where they still have power, later that day.

"I was surprised, but I really shouldn't have been," she said. "Always look for the helpers in tough times, and it will never fail that they're there."

READ MORE: How you can help Texas winter storm victims

They opened up their homes

Adrian and Gina Escajeda expected to ride out the storm for a "day or two." They stocked up on toilet paper and a few nonperishable foods in case they wound up stuck in their home in Manor, a suburb east of Austin.

The Escajedas hadn't prepared for this.

The electricity in their house went out early in the week and never returned. Their water shut off, too. Adrian Escajeda, a photojournalist and student, built a fort in their bed to keep their heads warm and turned on his battery-operated camera lights so they could see.

The last straw, he said, was when the inside of his house hit -6 degrees.

The Escajedas took their friend Starla Everett up on an offer to stay at her place down the road, which, at a maximum temperature of 55 degrees, felt like "the Bahamas" compared to their icy home. Starla's neighbor Kaylie Ochoa even offered Adrian and Gina warm bowls of chili when they arrived.

"She had a room ready for us, water and great company," he told CNN.

He's floored, he said, by the kindness Everett and her neighbors showed him, especially during a time like this, when food and heat are scarce.

"It is so amazing to know that even in times of need -- and knowing the grocery stores are closed -- people would still open their homes and offer their food," he said.

"It's such a simple thing to make just a little more food to fill an empty stomach."

They kept their neighbors informed

Debra Crawford Davis and Megan Johnston don't live in big cities. Crawford Davis lives in Palestine in east Texas, and Johnston in Pottsboro, near the Texas-Oklahoma border. Most national attention during the storms has focused on Houston, Dallas, Austin, San Antonio -- cities with populations several times larger than theirs.

So they created their own resources.

Both Crawford Davis and Johnston created Facebook groups designed to keep residents of their communities safe and informed during the pandemic. And now, this week, the groups have gotten busy again, transforming into a venue for residents to ask their neighbors for help.

Johnston ventures out into the cold and keeps neighbors abreast of what stores and gas stations are open. Her power is out, but she shares tips on how to cook without it, like stacking candles underneath a pot to heat up hot chocolate and soup. If there's a boil water notice, school closures or free rides warming center, she'll find it and post it for the group's 900-plus members.

"I wanted a safe place for people to speak about what's going on in the community and what we can do for others," she said.

Crawford Davis had the same idea. She created the group initially to provide aid to neighbors during the pandemic, and she and her two friends would deliver boxes of food to residents of Palestine and other parts of Anderson County.

Now, her neighbors have posted about needing firewood, diapers and groceries, and other group members have delivered them free of charge. A city council member dropped off water on doorsteps, and another man cooked meals for whoever wanted some. One woman even got stuck in her driveway on the way to help another neighbor, Crawford Davis said, but she didn't let that stop her -- her husband carved out a path so she could continue on her way.

"We are a small town, but we're a close town," Crawford Davis said. "We're able to see the good in one another and come together for the greater good."

Their kindness has been the bright spot of a devastating week

This week has been more difficult than any Texans thought it would be. With many grocery stores shuttered, food and water are scarce. Families are huddling in their cars to keep their children warm. At least 16 people in the state have died, according to CNN's count.

Escajeda said he and his wife have felt "so down, beaten, angry, disappointed and just over all frustrated."

Their hardship made Starla's show of kindness all the more meaningful. It matters, too, he said, that his coworkers at Starbucks have checked in on him every day to make sure he and his wife aren't hypothermic.

"I'm just really proud of this community and the friends we've made here," he said.

Rambo-Hernandez is already looking toward the future fun she and her new friends will have when the ice melts and the power returns.

"I'm hoping we can find a way to have a safe, socially distanced night out with them when this is over!" she said.

And Crawford Davis and Johnston have no plans to stop helping their neighbors in their Facebook groups. The pandemic isn't over, so even when the ice melts and the power turns back on, their work continues.

Despite the heartbreak and hardship their communities have weathered over the last year, it gives these Texans hope to know that help is there if they need it.

CORRECTION: This piece has been corrected to accurately reflect Karen Rambo-Hernandez's title. She is an associate professor in the department of Teaching, Learning & Culture at Texas A&M University.