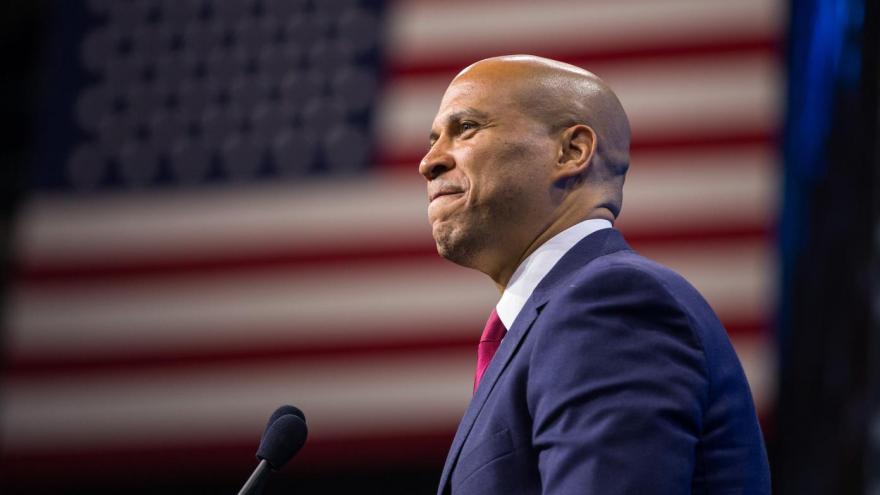 Senators Cory Booker and Tim Scott are the negotiators behind legislation to overhaul the nation's policing laws. Booker is shown here at the New Hampshire Democratic Party Convention at the SNHU Arena on September 7, 2019 in Manchester, New Hampshire.

(CNN) -- The two lead Senate negotiators behind legislation to overhaul the nation's policing laws expressed new optimism Monday, on the eve of a critical milestone President Joe Biden had set to make progress on such a plan, with Republican Sen. Tim Scott of South Carolina saying, "I think we can see the end of the tunnel" when it comes to crafting a bipartisan deal.

Biden had called on Congress to pass a bill overhauling policing by Tuesday, the one-year anniversary of George Floyd's death. The negotiators have maintained they are not adhering to any timelines, instead saying they want the right bill, not a rushed bill.

But Scott, who is the chief Republican negotiator for the plan, said that while he did not anticipate an announcement of a deal this week, "we're starting to see a framework."

When asked by CNN if the group planned to announce a deal Tuesday, Booker replied, "No."

"We need to find the areas of compromise and we found some, so I'm optimistic," Scott said, explaining the group had made progress as they worked over the weekend.

The new comments come after the group, which also includes Democratic Rep. Karen Bass of California, who is leading the House side of negotiations over the deal, worked over the weekend.

House Speaker Nancy Pelosi, a California Democrat, will meet with members of Floyd's family Tuesday in Washington. According to a senior Democratic staffer, the Floyd family will have a morning meeting with Pelosi and Bass as well as others in the Capitol. Neither Scott nor Booker currently has plans to meet with the Floyd family on Tuesday.

Negotiations are continuing this week, with Bass staying in DC even while the House is not voting so that the in-person talks could continue.

Booker told CNN it's "fair" to say a framework of a deal is coming together, but he wouldn't discuss if they're getting closer on qualified immunity -- a controversial federal doctrine that protects officers accused of violating the Constitution while on duty -- though that issue remains a chief sticking point.

"We worked through the weekend, and we made a lot of progress. ... I will tell you this is a vast bill with a lot of good things. And the fact that we've developed it so well is really encouraging to me."

Booker added: "The last two weeks especially, all through weekends, has been hours and hours and hours of negotiations, and a lot of the key principal groups around policing issues, from civil rights groups to union leaders, so there is a lot of work to do, to be clear, and so this will be another week like last week where we're" working around the clock.

"It is a conscious effort to keep both sides at the same table fighting over the same issues and making progress over those issues," Scott said. "The best way to do that is to do it incrementally so as to get something and not to just be at the table debating back and forth."