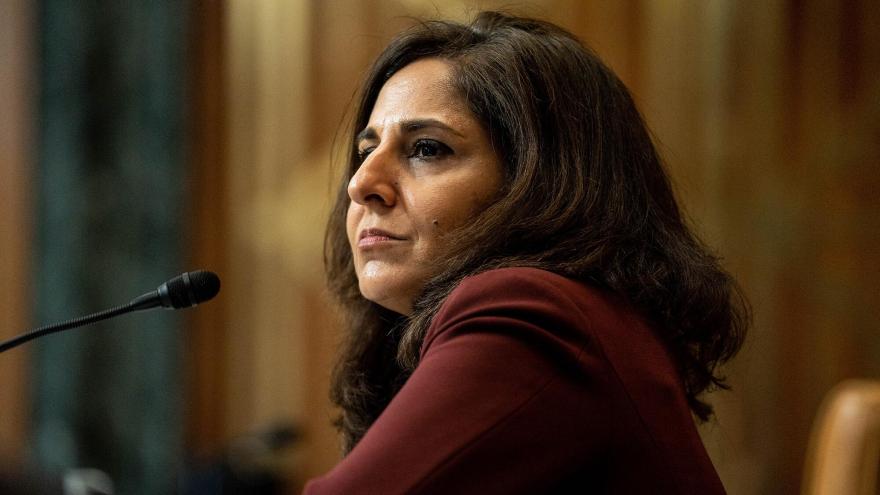 Neera Tanden was named White House staff secretary on a morning staff call on Friday. Tanden is shown here on February 10, 2021 at the U.S. Capitol in Washington, DC.

(CNN) -- Neera Tanden was named White House staff secretary on a morning staff call on Friday, a person familiar with the matter and a senior White House official said, after her nomination to be President Joe Biden's budget chief was pulled earlier this year when key senators balked at some of her past tweets.

Since her nomination was pulled, Tanden has worked in the White House on communications efforts surrounding Biden's economic agenda.

The White House staff secretary is a behind-the-scenes but critical role in the West Wing, responsible for managing paper flow to the President from other areas of the administration and federal government. The person filling the job has been viewed as one of the most powerful in the building.

Biden originally nominated Tanden to be director of the Office of Management and Budget. But Democratic Sen. Joe Manchin of West Virginia joined Republicans in blocking her confirmation, citing her past acerbic criticism of political adversaries in both parties.

Without Manchin's support, Tanden would have needed a Republican senator to vote in favor. Democrats hold a narrow majority in a 50-50 Senate with Vice President Kamala Harris able to cast tie-breaking votes in the chamber.

Tanden withdrew from consideration in March. Shalanda Young, confirmed by the Senate as deputy budget director, is serving as acting director pending confirmation of a permanent choice.

Tanden was a longtime aide to Hillary Clinton who became president of the liberal Center for American Progress after leaving the Obama administration. Her new role does not require Senate confirmation.

In the days after the election, Tanden deleted more than 1,000 tweets from her personal account, some of which were reviewed by CNN's KFile.

During the confirmation process, Tanden appeared before the Senate Homeland Security Committee and apologized for some of the criticism she has previously directed at congressional Republicans and expressed regret over past tweets. Tanden later faced senators on the Budget Committee, including Sen. Bernie Sanders, an independent who caucuses with Democrats, who said some of her past comments amounted to "vicious attacks made against progressives."