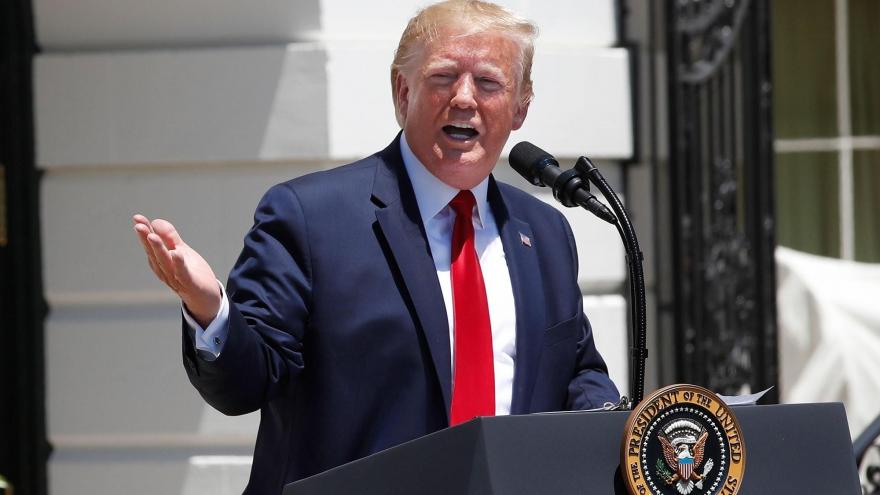 President Donald Trump speaks during a Made in America showcase event on the South Lawn of the White House, Monday, July 15, 2019, in Washington.

The data is based on a nationally representative sample of US adult Twitter users who gave permission to have their accounts analyzed and answered some questions in December 2018. Almost a quarter of all adults said they use Twitter (22%), and they tend to be younger and more Democratic leaning than the overall population. But Trump's tweets reach further and wider than just those who follow him.

Trump tweets almost constantly, often concurrently with things he sees or hears on television. A series of recent tweets from the President drew criticism -- even from some members of his own party -- in the last few days after he made racist jabs at four Democratic congresswomen.

Of those who follow Trump on Twitter, more than half approved of the job he's doing as president (54%). But Republicans and Republican-leaning adult users are more likely than Democrats to follow him (31% of Republicans follow Trump, only 13% of Democrats who use Twitter do).

Among those who don't follow the President on Twitter, only a quarter approved of the job he's doing.

Twitter users who said they posted political content in the last 30 days were more likely to follow the current President and former leaders. One-third who had tweeted about politics recently followed Trump and half followed Obama.

The Pew study was based on 87% of adults on Twitter who have public accounts and didn't include the 13% with private accounts, since researchers couldn't verify who these users followed. Researchers analyzed 2,388 US adults with a public Twitter, going beyond counting each of the President's followers, a number that can include bots or accounts run by companies.