Nearly 5,000 National Guard troops to remain in Washington through mid-March due to concerns about QAnon chatter 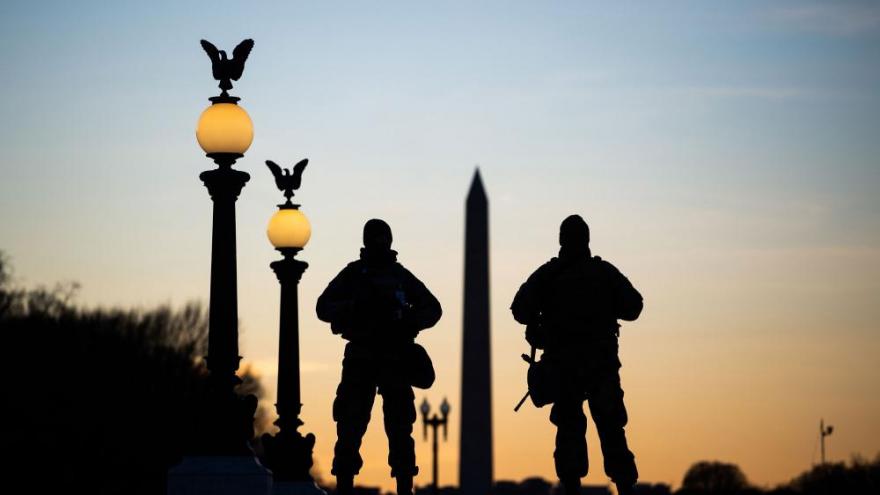 According to the House Armed Services Committee, nearly 5,000 National Guard troops will remain in Washington through March 12 because of online chatter among QAnon supporters who suggest former President Donald Trump could still be inaugurated on March 4. Pictured here soldiers in front of the Capitol in Washington, DC on January 19, 2021.

(CNN) -- Nearly 5,000 National Guard troops will remain in Washington through March 12 due, in part, to concerns about potential violence stemming from online chatter among QAnon supporters who suggest former President Donald Trump could still be inaugurated on March 4, according to the top Democrat on the House Armed Services Committee.

"Some of these people have figured out that apparently 75 years ago, the President used to be inaugurated on March 4. Okay, now why that's relevant, God knows, at any rate, now they are thinking maybe we should gather again and storm the Capitol on March 4 ... that is circulating online," Rep. Adam Smith, the panel's chairman, said Wednesday during a hearing with defense officials.

"Stuff like that circulates all the time, does it mean it's going to happen, probably not, but if you want to help, tell them not to do that, tell them that the election is over. Joe Biden won. It was a free and fair election, and let's get to work, that too would help reduce the well I don't know fear/paranoia that people feel that requires everything that we're seeing around here," he added.

The request for 4,900 National Guard troops to stay in Washington through March 12 was made by US Capitol Police, defense officials said Wednesday, adding that the Pentagon is working with relevant law enforcement agencies to determine what an appropriate force presence looks like now that the threat landscape has changed in the weeks since Biden's inauguration.

"The number was based on different missions that they would, the National Guard members would be supporting, response force, perimeter, security, those kinds of mission sets. We're working with them. As you know, the current request ends on March 12. We're trying to determine with them is what is the right level of security that they need from the National Guard considering that the circumstances have changed," Pentagon official Robert Salesses told lawmakers.

"We work very closely with the FBI, Secret Service, and others and the Capitol Police to try to determine what they believe that threat is, and then looking at what they believe is the need for the National Guard, or the types of mission sets that they need support from, we work very closely with them to try to determine what that is. Obviously 4900 is a very large number here on the Capitol," he added.

US Capitol Police did not immediately respond to CNN's request for comment.

Salesses said the department is not tracking any specific threats, an assessment that echoes what a Department of Homeland Security spokesperson told CNN on Monday.

"While there is no specific, credible threat to the homeland at this time, DHS continues to gather, review, and analyze new intelligence each day and regularly updates its federal, state, local, tribal, and non-governmental partners on the results of those efforts. The most significant terrorism-related threat currently facing the nation comes from lone offenders and small groups of individuals inspired by domestic extremist ideological beliefs, including those based on false narratives spread over social media and other online platforms," the spokesperson said.

To that end, Smith made clear that there are still lingering concerns about potential violence by domestic extremists which he said are fueled by the fact that some Republican lawmakers still refuse to acknowledge the election outcome was fair and free.

"I agree that the threat environment is less, but if you want to know what's driving the threat environment, it would be helpful if every single elected official and person in a position of power in this country publicly acknowledged that Joe Biden was the dually elected president in a free and fair election. The degree to which people are still driving that narrative, that narrative then gets taken and put into really wacky sets of arguments," he said.

An increasing number of Republican lawmakers have called for the National Guardsmen in Washington to return to their home states and multiple Democrats have said they agree their presence should not be permanent. But there are ongoing discussions on Capitol Hill about possibly extending Guard deployment beyond its current March 12 end date, according to two sources familiar, raising questions about how long they will remain in the nation's capital.

Concerns about March 4 are only one reason some lawmakers argue the National Guard deployment should be extended. CNN has previously reported that law enforcement officials are also worried about security around Biden's upcoming joint address to Congress.