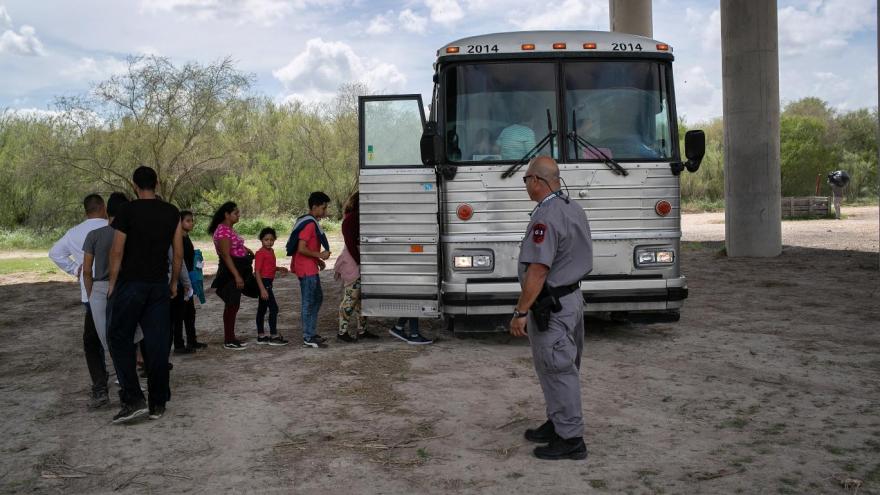 Arrests of migrants families and unaccompanied children at the southern border reached record highs over the past year, driven by a surge in asylum seekers, acting Customs and Border Protection Commissioner Mark Morgan announced Tuesday.

(CNN) -- Arrests of migrant families and unaccompanied children at the southern border reached record highs over the past year, driven by a surge in asylum seekers, acting Customs and Border Protection Commissioner Mark Morgan announced Tuesday.

The figures provided showed the dramatic spike in border apprehensions throughout the year, as well was an increase in seizures of all hard narcotics and new record high of travelers processed through customs.

The crush of migrants at the southern border this past fiscal year -- totaling nearly 1 million, Morgan announced this month -- overwhelmed US officials. The influx led to overcrowding at facilities and in some cases, deteriorating conditions, raising concerns within the agency and among lawmakers and immigrant advocacy groups.

"These are numbers that no immigration system in the world can handle, not even in this country. And each month during the fiscal year, the numbers increased. You saw them. We all saw them," Morgan said.

On one single day in May, CBP had nearly 20,000 people in custody, five times its capacity, he noted.

In May, the Department of Homeland Security's inspector general found "standing room only conditions" at an El Paso, Texas, Border Patrol processing facility that had a maximum capacity of 125 migrants. On May 7 and 8, logs indicated that there were "approximately 750 and 900 detainees, respectively," according to the report.

"(Customs and Border Protection) was struggling to maintain hygienic conditions in the holding cells. With limited access to showers and clean clothing, detainees were wearing soiled clothing for days or weeks," the report stated.

Staffing issues, which has been an ongoing struggle within the Border Patrol ranks, were also exacerbated amid the uptick in migrants, forcing the agency to redirect agents and officers to the southern border to assist.

Hiring outpaced attrition last year, but still did not meet the aggressive goals laid out by President Donald Trump in his first weeks in office. In January 2017, Trump issued an executive order calling for the hiring and assignment of an additional 5,000 Border Patrol agents "as soon as is practicable." The agency increased the number of CBP officers by 1,034 for a total of 24,511, and added 93 Border Patrol agents, totaling 19,648.

Morgan acknowledged that the number of arrests at the border have declined, but maintained the situation along the border is still a crisis. In September, Border Patrol arrested 40,507 migrants on the US-Mexico border, a significant drop from nearly 133,000 arrests in May, according to agency data.

The administration has credited a series of recent policies aimed at curbing the flow of migrants for the downturn. Morgan cited those policies, as well as agreements with Central American countries that could, in part, limit who's eligible for asylum in the United States.

It's unclear, however, whether the drop in arrests will hold in the coming months when temperatures drop and migrant flows usually tick up again.