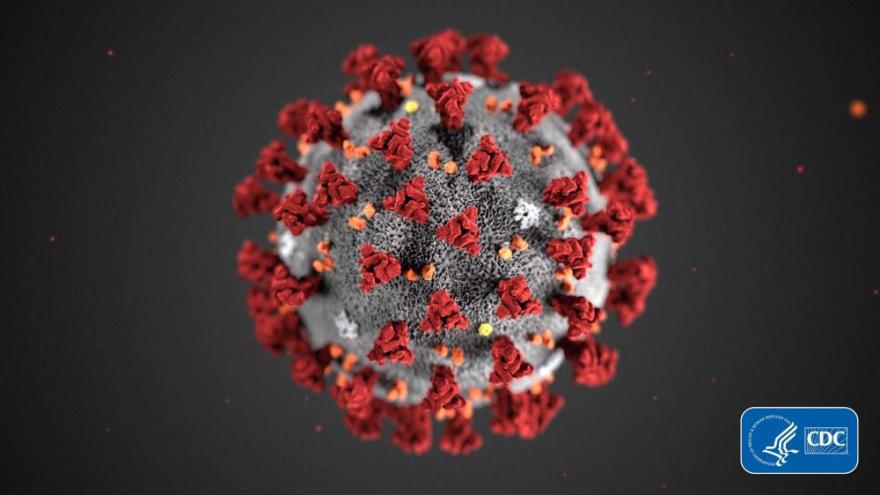 This illustration, created at the Centers for Disease Control and Prevention (CDC), reveals ultrastructural morphology exhibited by coronaviruses.

(CNN) -- Despite evidence from infectious disease experts suggesting otherwise, nearly 30% of Americans in a new Pew poll said they believe the novel coronavirus was likely created in a lab.

The latest poll from the public opinion fact tank shows that misinformation around the virus is still king, even as fact checkers and public health officials work furiously to dispel it and save American lives.

A total of 23% of adults polled said they believe the virus was created intentionally. This is almost certainly not true, according to the genetic detectives studying the virus's origins.

And 43% -- a plurality, but not an overwhelming majority -- said the virus likely came about naturally. This is most likely the truth, according to virus experts.

The poll was conducted between March 11 and 16. During that time, the World Health Organization declared Covid-19 a pandemic, but most states hadn't received stay-at-home orders yet.

Its origin is up for debate, but it wasn't made in a lab

There's still much we don't know about the coronavirus pandemic, but virus experts agree on one piece of its origin story: The virus likely originated in a bat, not in a Chinese lab.

Coronaviruses are a large family of viruses that mostly sicken animals. Some, like Covid-19 and SARS before it, "jump the species barrier" and sicken humans, too.

That seems to be what happened with Covid-19. In early February, Chinese researchers published an article in Nature -- a top science journal -- that concluded the "2019-nCoV is 96% identical at the whole-genome level to a bat coronavirus."

The once widely held belief that the virus originated in a Chinese wet market is debated, too: While some virus experts told CNN earlier this month that the hygienic conditions of the market made it prime grounds for "zoonotic spillover," an article published in the Lancet shows that a third of the first 41 patients had no contact with the wet market, including the first confirmed patient.

The theory that the virus originated in a lab was one repeatedly shared on One America News Network, a far-right channel favored by President Donald Trump. The White House has allowed One America News reporter Chanel Rion to attend briefings against press corp protocol to allow smaller news organizations to rotate in and out of briefings to observe social distancing. (Rion led an investigation that claimed the virus was created in a North Carolina lab a few years ago.)

While at least one virus expert didn't rule out the idea that the virus was created in a lab, CNN could not independently verify those claims, and Chinese and Western scientists have repeatedly denied that.

A pandemic of misinformation

Previous pandemics didn't unfold in an era when information travels faster than a virus.

The Covid-19 pandemic has given way to what the World Health Organization called an "infodemic" -- inaccurate information about the virus, its origin and how it spreads is flooding social media, and unsophisticated algorithms have shoved those bunk theories into the public consciousness.

Take the conspiracy that 5G networks are somehow linked to the coronavirus. It started as a fringe theory among New Agers and QAnon followers. Soon, it ended up on celebrities' Instagram accounts, and Twitter published at least two "moments" debunking it.

Twitter and other social networking apps are tightening up as a result. WhatsApp, a Facebook-owned messaging service, is limiting the number of times a message can be forwarded to a user in efforts to keep conspiracies from infiltrating multiple groups at a time. Social media services now show buffer messages on top of search pages that warn users of misinformation.

Whether it will be enough to change people's minds and potentially save lives has yet to be seen.