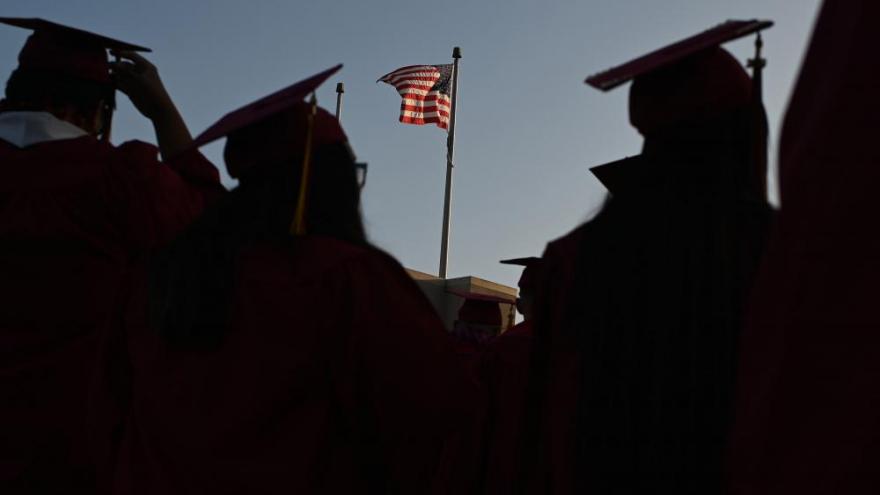 The Public Service Loan Forgiveness program was signed into law by President George W. Bush in 2007 and provides an incentive for workers to remain in lower-paying, public service jobs despite their student debt.

(CNN) -- Katherine Rickfelder, a Florida public school teacher, is one of nearly 30,000 people who have seen their student debt balance reduced to zero since the federal government announced significant changes to a popular loan forgiveness program last month.

"I cried when I got the letter. I honestly feel like I can finally breathe again," said Rickfelder, who had another five years of payments to make under the old rules of the Public Service Loan Forgiveness program. She started paying off her student debt about 16 years ago.

The letter, which she received from the US Department of Education in October, said that she would get credit for 91 additional monthly payments she had made on her student loans. That meant that she had already made more than the 120 payments required for debt forgiveness under the PSLF program, which is aimed at borrowers working in government and nonprofit sectors.

"I love teaching. But it has always been a financial struggle. Now I don't have to keep finding a workaround for the debt," Rickfelder, a single mom, said.

Over the years, the money she borrowed for her undergraduate and master's degrees ballooned because her payments were barely covering the interest on the student loans. Her debt grew to more than $189,000.

Now, in addition to the cancellation of her remaining student loan debt, she also received a refund last week for the extra payments she had made.

Eligibility for the PSLF program is temporarily expanded until October 31, 2022, so that it now includes borrowers who have older loans that didn't originally qualify as well as those who were in the wrong repayment plan but met the other requirements.

More than 550,000 people are expected to see their debt wiped away sooner than expected due to the changes.

The Public Service Loan Forgiveness program was signed into law by President George W. Bush in 2007 and provides an incentive for workers to remain in lower-paying, public service jobs despite their student debt.

Teachers, social workers and first responders can be eligible as well as doctors and lawyers -- if they were employed full time by a nonprofit or the government while making payments.

After borrowers make 10 years of qualifying monthly payments, their remaining federal student debt is wiped away.

But the program has long been criticized for being difficult to navigate, with borrowers receiving little help from their loan servicers, the companies that handle the billing. Many borrowers have said they found out they weren't eligible for forgiveness only after making what they thought were a decade's worth of qualifying payments.

Prior to the recently announced changes, eligibility also hinged on having a Direct Loan and being enrolled in an income-driven repayment plan, which sets payments based on income and family size. Those with Federal Family Education Loans, which were made by private lenders but backed by the government, did not qualify. More than 80% of borrowers who have filed forms that did not meet the program's requirements had one of these loans.

Borrowers are allowed to consolidate a Federal Family Education Loan into a Direct Loan to become eligible for the program, but none of their previous payments would count toward the required 120 -- until now.

Due to the temporary waiver, it no longer matters what kind of federal student loan a borrower has or what payment plan he or she is enrolled in. All payments will be eligible for PSLF if the borrower was working full time for a qualifying employer.

But many borrowers who newly qualify for debt forgiveness are still waiting to see their balance reduced. It's going to take time for the Department of Education to review all their accounts.

"Please understand that complex changes of this magnitude are hard to process and execute," wrote Federal Student Aid Chief Operating Officer Richard Cordray in a letter sent to borrowers earlier this month.

"We are working as quickly as possible to update your account and give you clear and accurate information. This may take several months," he added.

The letter also acknowledged that some qualifying borrowers have received confusing information from their loan servicers and some have even been denied since the program overhaul was announced. Cordray pledged that those borrowers' accounts would be reviewed in the next few months.

What student loan borrowers can do next

Many borrowers won't have to take any action in order to have the Department of Education review and update the number of their qualifying payments.

But those with older Federal Family Education Loans will have to consolidate into a Direct Loan if they have not already done so. Those who already have Direct Loans but have not submitted an employment certification form for past periods of repayment must also do that now.

Borrowers have until October 31, 2022, to make those changes to qualify for forgiveness under the temporary waiver. For those unsure if they qualify, the Department of Education updated its PSLF Help Tool earlier this week to reflect the new guidelines. The tool offers more details about next steps needed to take advantage of the waiver.