After 2 years and an abrupt end to the Covid-19 mask mandate, passengers are excited and confused 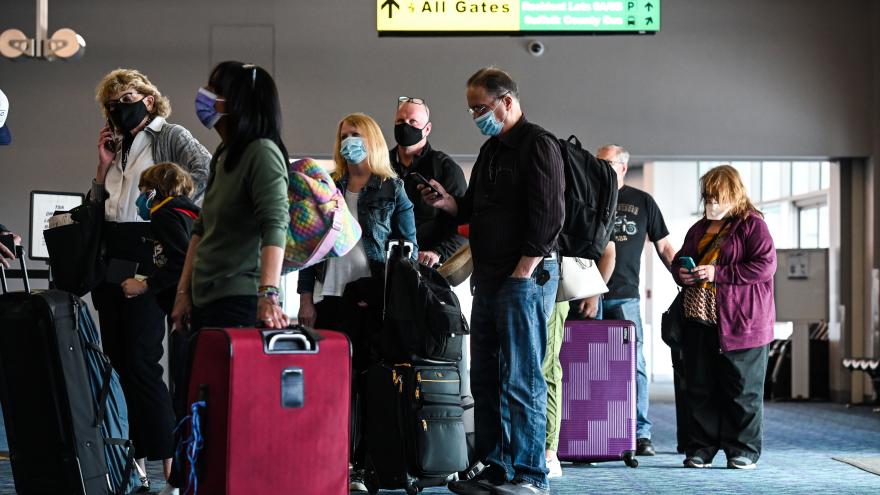 (CNN) -- Scenes ranging from excitement to confusion played out Monday across America's airports after a federal judge struck down the Biden administration's mask mandate for public transportation.

Some passengers learned of the Florida judge's decision on the rule aimed at mitigating the Covid-19 threat just moments before takeoff, as flight attendants announced that for the first time in nearly two years, masks were optional.

Southwest passenger Pam Eason captured video of the moment a crew member told a plane full of passengers that Southwest had dropped its mask requirement. In the video, passengers can be heard clapping and cheering, and one says, "Yay, no more masks!"

"What an amazing relief!" Eason told CNN of her reaction the news. "Praise God, we've all done our part to get where we're at."

On a Sun Country Airlines flight from Las Vegas to Minneapolis-St. Paul, a flight attendant went down the aisle holding a trash bag for passengers to throw their masks away.

The judge's decision comes after nearly two years of mask requirements for US travelers -- first enforced by major airlines in spring of 2020 and later federally mandated in February 2021 for airplanes and other public transport methods.

The Transportation Security Administration confirmed Monday it would no longer enforce the mandate, and a planned extension set to take effect Tuesday will also be rescinded.

Still, some airport travelers plan to keep wearing masks, even without a federal mandate or airline rules, they told CNN. The US Centers for Disease Control and Prevention continues to recommend mask wearing for passengers using indoor public means of transportation.

"I'll always wear my mask," Davida Wright said at the Hollywood Burbank Airport in California. "I lost my grandmother to Covid a year ago, and so I'm very particular about the masks. So, I'm going to continue to wear them no matter what the mandates are.

"I'm protecting myself by wearing my mask," she said, adding that her young daughter would continue masking, too.

Some said they would consider circumstances when deciding whether to mask, including factors such as crowd size or whether they know people are vaccinated.

"I felt much more comfortable keeping (my mask) on most of the time," Jason Alexander said while preparing to board a flight at New York City's LaGuardia Airport, describing how he felt seeing others maskless. "Certainly, in areas where there's a lot of people, I'm not comfortable yet with people not having masks."

Before airlines individually announced whether they would continue requiring masking without a federal mandate, there was some confusion among passengers and airline staff.

When Delta passenger Elizabeth Nesmith boarded her flight Monday, an airline employee told her she needed to wear her mask because they hadn't received any updates from Delta, she said. But shortly afterward, a flight attendant announced Delta had made mask wearing optional.

Some airlines also asked passengers to be considerate of others' choice whether to wear a mask.

"While we are glad this means many of us get to see your smiling faces, we understand some might have mixed feelings," Alaska Airlines posted on its website. "Please remember to be kind to one another and that wearing a mask while traveling is still an option."

Alaska Airlines also noted some passengers who were banned from the airline when the mask policy was in place will continue to be prohibited from its aircraft.

The Association of Flight Attendants asked "everyone to practice patience, remain calm, and to continue to follow crewmember instructions" as adjustments to the regulations move forward, the association said Monday in a statement.

"People should remember that just because you're not required by the government to wear a mask, that doesn't mean you shouldn't wear a mask. I'm definitely going to be masking when I go to planes, on trains, in airports," she told CNN.

"Make sure if you're masking, wear an N95 or equivalent mask because you have to protect yourself," Wen said. "Masking works very well even if others around you aren't masking."

While the mandate has fallen on a federal level -- and some transportation services such as Amtrak announced mask wearing would be optional -- other agencies are still following the CDC's guidance and keeping mask requirements active.

New Jersey Transit and the New York Metropolitan Transportation Authority are among those that announced Monday they will continue to require masks onboard for passengers during travel. Additionally, Portland's TriMet, Seattle's King County Metro and the Chicago Transit Authority said they will keep their masking policies for now.

In Atlanta, city transit system MARTA will no longer require riders or employees to wear masks. SEPTA in Philadelphia and CapMetro in Austin, Texas, also announced they would lift their masking requirements but noted the CDC still recommends passengers wear masks.

The push-and-pull of different agencies and cities rescinding or even reinstituting mask mandates will be "a little confusing" at times, Dr. Paul Offit, director of the Vaccine Education Center at Children's Hospital of Philadelphia, said Monday.

Although cases there are rising, since a vast majority of Americans have some form of protection through prior infection or vaccination, "the odds are, that's not going to precede an increase in hospitalizations and intensive care unit admissions and deaths, we'll see," he said. "I think that's where we are right now in this pandemic."