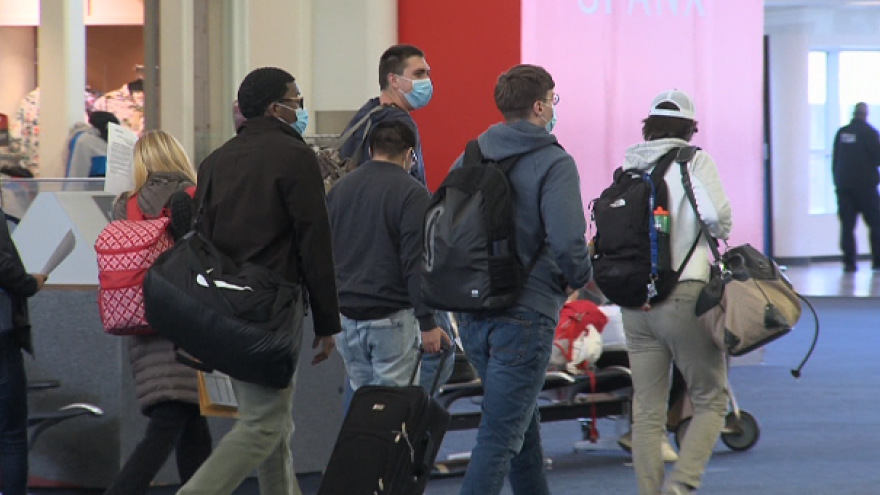 WASHINGTON — Nearly 1.3 million people went through U.S. airports on Sunday, the highest level of air travel in more than nine months, despite fear that travel will lead to more cases of COVID-19.

The Transportation Security Administration said it screened 1,284,599 on Sunday, the highest total since March 15. More than 10 million people have traveled by air since Dec. 18, including six days with at least 1 million people getting screened.

Figures on road trips aren't available, but AAA predicted that about 85 million Americans would travel during the Christmas holiday season, most of them by car.

"As much as we advise against it, nonetheless, it happens," he said on CNN. "And that's one of the reasons why we're concerned about that being a real risk situation for the spread of infection."

New cases of COVID-19 have been surging for about two months. There have been more than 330,000 reported deaths from the virus.

— Trump has signed a massive COVID-19 relief bill for Americans but his foot-dragging has caused a lapse in unemployment benefits for millions.

— British hospitals are getting overwhelmed by coronavirus patients.

— A large study of a COVID-19 vaccine candidate made by Novavax Inc. is getting underway in the U.S.

— AstraZeneca's chief says researchers believe its vaccine will be effective against a new variant of the virus driving a rapid surge in infections in Britain.

DUBAI, United Arab Emirates — Saudi Arabia has decided to extend its weeklong closure of all official ports of entry over fears of the new fast-spreading variant of the coronavirus.

The kingdom's Interior Ministry announced on Monday that borders will remain shut and international commercial flights suspended for at least another week. Cargo flights and shipping routes will not be affected.

The country sealed its ports last week, following the discovery of the more contagious virus strain in Britain. Starting on Sunday, non-citizens in the country were allowed to leave the kingdom despite the travel ban.

Although cases have declined in recent months, Saudi Arabia has struggled to stem a major outbreak that has infected over 362,000 people and killed more than 6,000.

WASHINGTON — A huge study of another COVID-19 vaccine candidate is getting underway Monday as states in the U.S. continue to roll out scarce supplies of the nation's first shot options.

The U.S. has authorized emergency use of two vaccines, one made by Pfizer and BioNTech and the other by Moderna, but doses will be rationed for months.

The candidate made by Novavax Inc. is the fifth to reach final-stage testing in the U.S. Some 30,000 volunteers are needed to prove if this vaccine — a different kind than its Pfizer and Moderna competitors — really works and is safe.

"If you want to have enough vaccine to vaccinate all the people in the U.S. who you'd like to vaccinate — up to 85% or more of the population — you're going to need more than two companies," Dr. Anthony Fauci, the top U.S. infectious disease expert, told The Associated Press.

The study, which is funded by the U.S. government, is open to all adults but will focus on high-risk older adults and volunteers from Black and Hispanic communities who have been hard-hit by the virus. Two-thirds of volunteers will receive the vaccine and the rest will get dummy shots.

The Novavax candidate uses lab-grown harmless copies of the spike protein that coats the coronavirus to train the body to recognize if the real virus comes along. The Pfizer and Moderna vaccines instead use a newer technology, injecting the genetic code for that protein.

In the U.S., Johnson & Johnson and AstraZeneca also have vaccine candidates in late-stage testing.

THE HAGUE, Netherlands — The Dutch public health service says it has confirmed 11 cases of the new, more contagious variant of the coronavirus that was first found in Britain, including five cases in a cluster linked to an elementary school in the port city of Rotterdam.

Health Minister Hugo de Jonge said in a letter to lawmakers Monday that authorities are further investigating the school cluster in an attempt to learn more about the spread of the new variant.

De Jonge says the research could help answer questions about whether the role of elementary school children in the spread of the new variant is different than in other variants of the virus.

All schools in the Netherlands are closed until at least Jan. 15 as part of a tough five-week lockdown aimed at reigning in soaring infection rates.

De Jonge says a government advisory panel of health experts scheduled to meet Wednesday to take stock of the pandemic also will discuss the new variant.

BERLIN — Chancellor Angela Merkel's chief of staff, a trained emergency room doctor, has helped vaccinate medical personnel against the coronavirus at a hospital in central Germany.

Helge Braun tweeted that he vaccinated intensive care personnel and carers at the University Hospital in Giessen, the area he represents in parliament, on Monday. He told n-tv television he wanted to join in as a signal of appreciation "but also to get a feeling myself for how the vaccination process works."

Germany started vaccinations at the weekend, along with most other European Union countries. It is starting with nursing home residents and staff, people over 80 and key medical personnel.

The vaccinations are starting as infection figures, along with hospitalizations and deaths, are at a high level in Germany. A partial shutdown in place since Nov. 2 was deepened on Dec. 16 with the closure of schools and most shops.

Merkel and Germany's 16 state governors are due to discuss the next steps on Jan. 5. Senior officials are making clear that the lockdown measures will almost certainly have to be extended beyond Jan. 10, when they are currently due to expire.

HELSINKI — Finland has become the latest European country to report a case of the more contagious coronavirus variant first identified in Britain.

Health officials said Monday that a Finnish citizen who had recently arrived from Britain for a Christmas holiday was diagnosed with the new COVID-19 variant in the southeast Kymenlaakso region over the weekend.

The person's recent connections were traced and his family members have been isolated. Finnish health officials said they believed the variant hasn't spread further.

Authorities have urged all those who arrived from Britain since Dec. 7 to get a coronavirus test. Last week, Finland halted all scheduled flights with Britain until early January.

Nordic neighbors Sweden and Norway reported their first cases of the new COVID-19 variant on Saturday and Sunday, respectively. Denmark reported its first such case earlier in December.

JAKARTA — Indonesia announced Monday that it will temporarily ban foreigners from entering the country for 14 days starting on Jan. 1 to fight the spread of the new, more infectious variant of COVID-19.

Indonesian Foreign Affairs Minister Retno Marsudi made the announcement in a press conference.

Foreigners that would arrive in Indonesia from Monday to Thursday will be allowed to enter by showing a negative result from a coronavirus test with 48 hours of their departure. They will do another test upon arrival at the airport in Indonesia. If the second test is negative, they will still have to complete a mandatory quarantine for five days and do another test after the quarantine.

"They will be allowed to continue the visit to Indonesia if the test shows negative result," Marsudi added.

BEIJING — A Chinese court on Monday sentenced a former lawyer who reported on the early stage of the coronavirus outbreak to four years in prison on charges of "picking fights and provoking trouble," one of her lawyers said.

Zhang, 37, traveled to Wuhan in February and posted on various social media platforms about the outbreak that is believed to have emerged in the central Chinese city late last year.

She was arrested in May amid tough nationwide measures aimed at curbing the outbreak and heavy censorship to deflect criticism of the government's initial response. Zhang reportedly went on a prolonged hunger strike while in detention, prompting authorities to forcibly feed her, and is said to be in poor health.

MOSCOW — Moscow has started offering a domestically developed coronavirus vaccine to people older than 60 after Russia's Health Ministry cleared it for use among the elderly.

Earlier this month, mass vaccination against COVID-19 started in Russia with the Sputnik V vaccine, which is still undergoing advanced tests among tens of thousands of people needed to ensure its safety and effectiveness. Front-line workers, such as doctors and teachers, were the first in line to get the shots, and until Saturday only those aged 18-60 were allowed to be vaccinated.

On Saturday, the Health Ministry cleared Sputnik V for use among those older than 60. In Moscow, the elderly can sign up for immunizations starting Monday.

Russian authorities have reported more than 55,000 deaths. Russia has been swept by a rapid resurgence of the outbreak this fall, with confirmed infections and deaths significantly exceeding those reported in the spring.

TOKYO — Japan on Monday reported a first victim of the coronavirus from the Japanese parliament — Yuichiro Hata, who has served as transport minister under the leadership of a now-defunct opposition party.

Hata, 53, was pronounced dead at a Tokyo hospital Sunday when he arrived after developing a fever. His autopsy confirmed the COVID-19 was the direct cause of his death, said Tetsuro Fukuyama, secretary general of the Constitutional Democratic Party of Japan, where Hata was a member of.

Hata was the son of late former prime minister Tsutomu Hata, who headed the opposition-led government in 1994.

WEST PALM BEACH, Fla. — President Donald Trump has signed a $900 billion pandemic relief package, ending days of drama over his refusal to accept the bipartisan deal that will deliver long-sought cash to businesses and individuals and avert a federal government shutdown.

The massive bill includes $1.4 trillion to fund government agencies through September and contains other end-of-session priorities such as an increase in food stamp benefits.

The signing Sunday, at his private club in Florida came amid escalating criticism over his eleventh-hour demands for larger, $2,000 relief checks and scaled-back spending even though the bill had already passed the House and Senate by wide margins.

His foot-dragging resulted in a lapse in unemployment benefits for millions struggling to make ends meet and threatened a government shutdown in the midst of a pandemic.

SEOUL, South Korea — South Korea has confirmed its first cases of a more contagious variant of COVID-19 that was first identified in the United Kingdom.

The Korea Disease Control and Prevention Agency said Monday the cases have been confirmed in a family of three people who came to South Korea on Dec. 22.

They arrived a day before South Korea halted air travel from Britain until Dec. 31 to guard against the new version of the virus. The three people, who reside in the U.K., are under quarantine in South Korea.

South Korea on Monday registered 808 new coronavirus cases, raising its national caseload to 57,680 with 819 deaths. The government said Sunday it would wait another week before determining whether to enforce its toughest physical distancing rules in the greater Seoul area that officials worry would further hurt the economy.