Nearly 1 in 3 election officials feel unsafe because of their jobs, a new survey shows 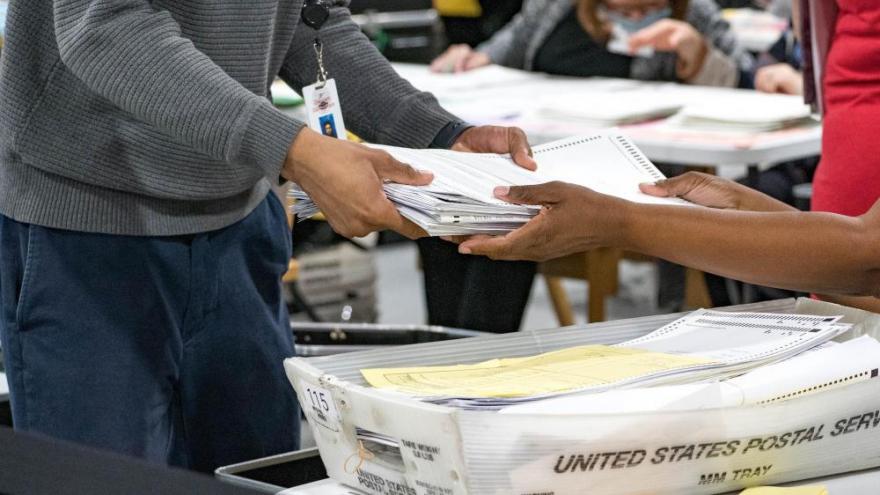 Nearly one in three local election officials included in a new survey say they feel unsafe because of their jobs, part of a report released June 15 that highlights threats to America's election workforce in the ugly aftermath of the 2020 presidential election.

(CNN) -- Nearly one in three local election officials included in a new survey say they feel unsafe because of their jobs, part of a report released Wednesday that highlights threats to America's election workforce in the ugly aftermath of the 2020 presidential election.

And about one in six election workers who responded -- about 17% -- have received threats, according to the survey of 233 election officials on behalf of the Brennan Center for Justice at New York University's Law School.

"They feel like they have a target on their backs for doing their work," Larry Norden, director of the election reform program at the Brennan Center, told CNN. "It's one of the scariest parts of the attacks on democracy. You can't have a democracy that functions if you don't have people who are unafraid to be the administrators of elections."

The survey accompanies a joint report from the Brennan Center and the Bipartisan Policy Center that catalogs some of the threats against election officials and proposes steps to protect them in an increasingly toxic political environment. Those recommendations include establishing an election threats task force at the Department of Justice, creating state grant programs to help election workers install security equipment at their homes and passing new laws to protect officials' personal information.

Last week, Attorney General Merrick Garland pledged federal resources to investigate and prosecute what he called the "dramatic increase in menacing and violent threats against all manner of state and location election workers."

For months, election officials have decried the abuse and threats they have endured in the wake of former President Donald Trump's defeat in the 2020 election and his relentless and groundless claims that widespread fraud contributed to that loss.

In an interview earlier this year with CNN, Richard Barron, who runs elections in Georgia's largest county, described weeks of racist taunts against his staff and an avalanche of emails and phone messages advancing bizarre conspiracy theories about the election. And at one point, he said, a caller threatened to bomb polling places ahead of January's runoff elections to fill two US Senate seats.

In a Thursday interview with CNN's Ana Cabrera, Barron said the threats have persisted. "We've received a call earlier this week saying that somebody was going to come down" to the Fulton County's election headquarters and "use his Second Amendments rights on everyone in the office."

"It's not letting up," Barron added.

Several election officials in battleground states who helped to certify President Joe Biden's win or who have pushed back on conspiracy theories about the election advanced by Trump and his allies have required law enforcement protection.

Just last week, the top election official in Georgia, Secretary of State Brad Raffensperger and his wife Tricia described receiving a death threat as recently as April 24. At one point, the couple decided to stop allowing their grandchildren to visit their home to guard against people screaming at them or worse.

"Just kind of think about the emotional scars that would -- could happen to them, but also what if they're actually in physical danger?" Raffensperger told CNN's Erin Burnett on Friday.

Months after the election, however, Trump's allies have pushed to reexamine ballots. In Georgia, a judge agreed last month to unseal more than 145,000 ballots in Fulton County, the home of Atlanta, to allow a post-election review there. Three previous audits of the results in Georgia have found no evidence of fraud. And across the country in Arizona, a problem-plagued hand recount of 2.1 million ballots in Maricopa County, ordered by Republicans in the state Senate, is nearing completion.

In their new report, the Brennan Center and the Bipartisan Policy Center call on social media companies to help combat the election disinformation they say is helping to drive the attacks against election administrators.

Among the fixes they propose: Establish an authoritative directory of US election officials, supported by the Department of Homeland Security's Cybersecurity and Infrastructure Security Agency. The list can then be shared with social media and internet platforms to help elevate "truthful information" from election officials on those platforms and through search engines, the study recommended.

In all, 233 completed the entire survey. The research firm conducting the work, the Benenson Strategy Group, did not receive or seek any information about the party affiliation of the election officials in the survey, Brennan officials say. But 52% of respondents came from swing states, 25% from blue states, and 23% from red states.

The researchers did not collect demographic information on those who did not respond, so it's hard to say definitively that the experiences of election officials who answered the survey are broadly representative of all election workers.

Still, Norden said the threats seem part of a broader problem, chipping away at the public's confidence in elections and the people who run them.

"It's all of a piece," he said, "the attacks on voting rights, these fraudulent reviews that are happening of election results, the casting doubt on whether we can trust election officials. It's all about undermining democracy."