Nearly 1,000 of Florida's beloved manatees have died this year as toxic algae blooms choke off their food source 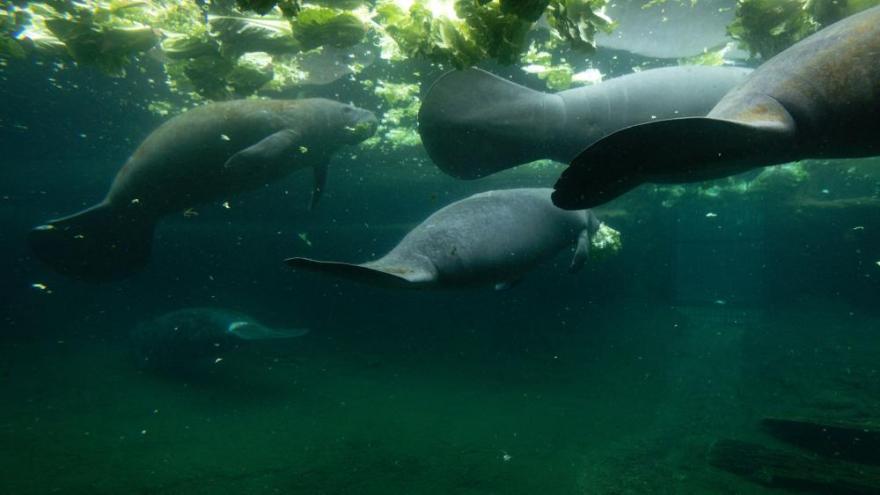 Nearly 1,000 of Florida's beloved manatees have died this year. Manatees here feed in a recovery pool in ZooTampa in Tampa, Florida, on January 19.

(CNN) -- Nearly 1,000 of Florida's beloved manatees have died since the beginning of this year, mostly due to starvation, wildlife officials said.

The 984 manatee deaths recorded so far his year more than doubles last year's total of 483 deaths, according to mortality statistics provided by the Florida Fish and Wildlife Conservation Commission (FWC).

Most mortalities were associated with starvation due to the lack of seagrasses near warm-water refuge sites in the Indian River Lagoon, the FWC said, noting that a comprehensive investigation into the deaths continues.

Manatees, affectionately nicknamed "sea cows," typically tip the scales at around 1,000 pounds and are usually spotted lumbering through the warm, shallow waters off Florida's coast.

But when nutrients from wastewater or runoff containing fertilizers, microplastics or toxic chemicals leach into a manatee's marine habitat -- whether freshwater or saltwater -- they can throw off the balance of the water and cause harmful algae blooms to form.

The blooms blanket the surface of the water and shade out the seagrasses underwater that rely on the sun to survive, killing the grasses.

The seagrasses that survive the malevolent blooms are overgrazed by manatees whose sources of food have shrunk, so the plants can't regrow quickly enough to continue to feed the manatees, Michael Walsh, a clinical associate professor at the University of Florida College of Veterinary Medicine who specializes in aquatic animal health, told CNN earlier this year.

As the seagrasses die, manatees begin to eat less or they eat other plants that don't provide the needed nutrition and they begin to lose weight. Over time, this leads to malnutrition and, eventually, starvation, Walsh said.

Manatees may travel hundreds of miles until they find a new source of food and, hopefully, warm water. But the colder it gets, the more food they'll need to consume to stay warm, Walsh said. If there's less food, they'll succumb more quickly to cold stress -- for their impressive girth, they don't have enough blubber to keep themselves warm when the water temperature drops below 68 degrees Fahrenheit.

The last comparable unusual mortality event occurred in 2010, when temperatures in Florida fell to historic lows in a cold snap that proved extremely dangerous for manatees. More than 760 manatees died that year, according to the FWC.

"We are committed to working with partners and our dedicated funding to identify actions necessary to conserve Florida's population of manatees," Carly Jones with FWC told CNN. "We will continue to evaluate next steps based on what we learn from this event."