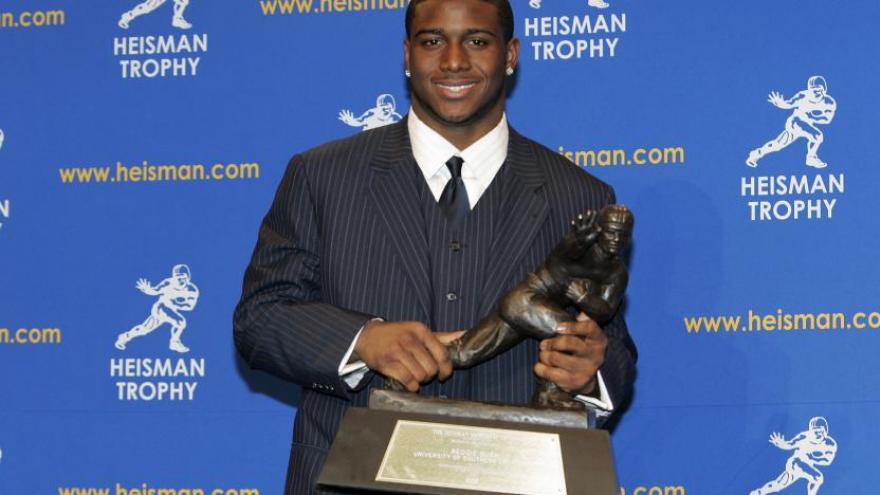 Five years after he won the award, Reggie Bush gave up the Heisman after an NCAA investigation.

(CNN) -- Reggie Bush, the former University of Southern California (USC) star who won the 2005 Heisman Trophy, won't get the award back.

The NCAA statement did not address Bush's case specifically, but included this line: "Previous penalties, including those that are several years old, will not be re-evaluated or reconsidered based on the recent changes to NIL rules."

Bush had two tweets Wednesday -- "Stay tuned...." and "Mastering the art of patience and timing" -- that appeared to be referencing the NCAA's stance.

An NCAA investigation in the years that followed Bush's college career found that the former running back received impermissible benefits, including several thousand dollars and a vehicle while at USC, and he was ineligible as of 2004.

In 2010, Bush voluntarily gave up the coveted award he won for an electrifying 2005 season, in which he rushed for 1,740 yards on just 200 carries and scored 18 total touchdowns.

Earlier this month after the NCAA said it would allow student-athletes to make money from their name, image and likeness, Bush and his representatives reached out to the NCAA and the Heisman Trophy Trust to request his award be reinstated.

"It is my strong belief that I won the Heisman Trophy 'solely' due to my hard work and dedication on the football field and it is also my firm belief that my records should be reinstated," he said.

The NCAA in 2010 levied a four-year probation on the USC football program, forced the Trojans to vacate its last two wins of the 2004 season, including the 2005 Orange Bowl, and all of its wins in 2005.

In addition, the school was banned from bowl games in 2010 and 2011 and could not associate itself with Bush.

Heisman Trophy Trust officials said in early July that Bush is not eligible to get the award back because of the NCAA's ruling.

"Should the NCAA reinstate Bush's 2005 status, the Heisman Trust looks forward to welcoming him back to the Heisman family," officials said in a statement.