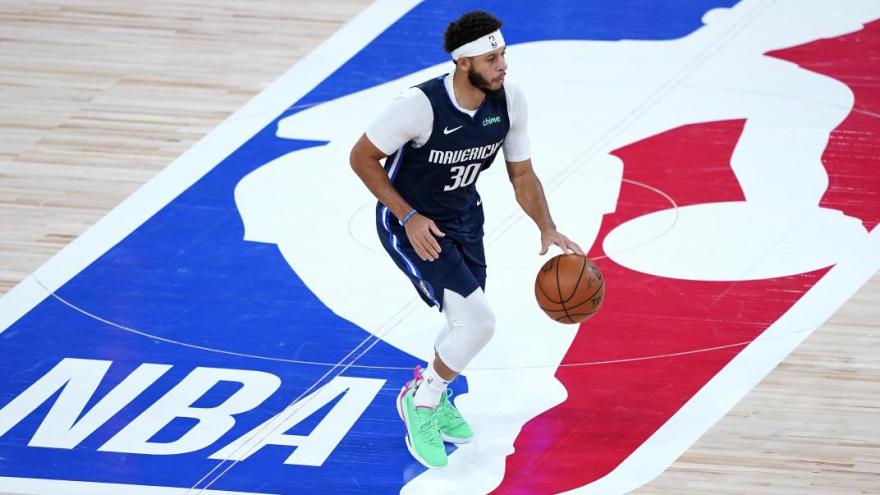 LAKE BUENA VISTA, FLORIDA - AUGUST 10: Dallas Mavericks' Seth Curry #30 moves the ball up court against the Utah Jazz during the first half of an NBA basketball game at The Arena at ESPN Wide World Of Sports Complex on August 10, 2020 in Lake Buena Vista, Florida. NOTE TO USER: User expressly acknowledges and agrees that, by downloading and or using this photograph, User is consenting to the terms and conditions of the Getty Images License Agreement. (Photo by Ashley Landis-Pool/Getty Images)

(CNN) -- The NBA will allow players to invite some guests to the league campus in Orlando between the first and second rounds of the restart playoffs.

In a Wednesday memo to teams, the NBA said "player's families and longtime close personal friends" were eligible as guests in the NBA bubble.

The league will exclude business associates, casual acquaintances and "any individual the player has not previously met in person or with whom the player has had limited in-person interactions (e.g., known by the player only through social media or an intermediary)."

Each team will receive up to 17 guest rooms. Players can host no more than four guests, although some exceptions are made for those with small children.

Teams advancing to the playoffs must appoint a "Player Guest Liaison" from their existing staff to act as point of contact between the team and the NBA.

A "Quarantine Coordinator" must also be assigned in the team's market to ensure guests have met requirements for the health protocols, including a seven-day self-quarantine at home.

Player guests can arrive on campus as early as August 24 and must complete a seven-day, in-room quarantine upon arrival.

No NBA players within the Disney World-based campus have tested positive for coronavirus during the past four weeks.

On Wednesday, the NBA and the players union jointly announced that 342 players were tested and all were negative.

The last time the NBA reported positive test results was July 13 when 322 players were tested with two confirmed positives.

The NBA playoffs are scheduled to begin Monday.