NBA players are dedicating their post-game interviews to Breonna Taylor 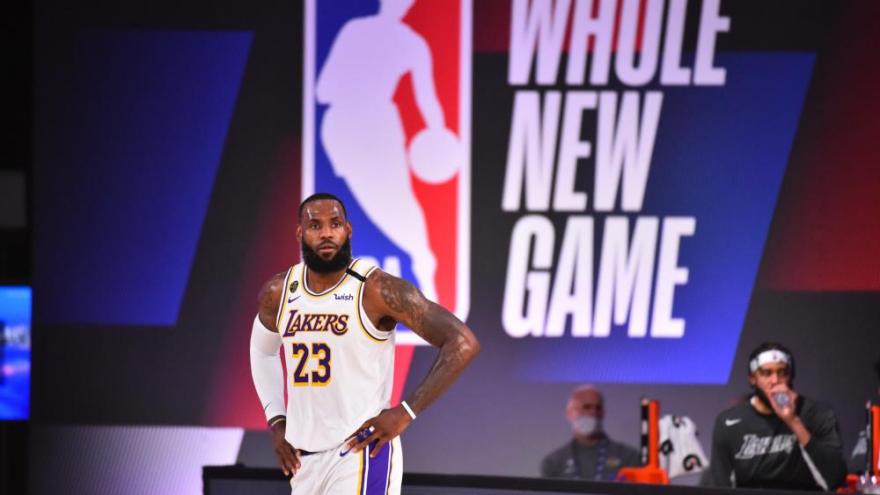 LeBron James made a powerful statement calling for justice for Breonna Taylor after a scrimmage on Thursday.

(CNN) -- With the NBA season officially resuming on July 30, players such as LeBron James are using their platforms to dedicate their post-game interviews to Breonna Taylor.

James talked to the media about Taylor on Thursday following the Los Angeles Lakers' scrimmage against the Dallas Mavericks and called for justice.

"I want to continue to shed light on justice for Breonna Taylor and to her family and everything that's going on with that situation," James said.

When asked what the next step should be to get her justice, he replied, "We want the cops arrested who committed that crime."

Taylor, a 26-year-old EMT, was shot eight times and killed by Louisville Metro Police Department officers in a nighttime narcotics raid on March 13. A CNN review of the evidence showed a tragic flaw in the police operation which led to Taylor's death. Criminal charges have yet to be filed against the officers, but one of the them was fired in June.

Months after Taylor's death, there are continued calls for justice in her killing.

"As one of the leaders of this league, I want her family to know, and I want the state of Kentucky to know that we feel for her and we want justice," James added. "That's what it's all about. What's right is right, and what's wrong is wrong. This is the wrong situation that's going on in my eyes and a lot of other eyes -- not only here in America but around the world as well."

Taylor's mother, Tameka Palmer, has spoken to a number of other NBA players, including star guard Chris Paul. They have expressed their support and wanted to learn more about Taylor's case, family attorney, Lonita Baker, told CNN.

"They don't want basketball to be a distraction for what's going on in the country," Baker said. "So, this is their medium to call for reform and changes.

"One of the most important steps right now -- for the family and the community -- is that the officers are held accountable."

James isn't alone, as players across the NBA are focusing their interviews on Taylor.

A reporter asked Smart if he were to hypothetically ask him about team defense, what would his answer be.

The NBA's counterparts in the WNBA have been at the forefront of the movement calling for justice for Taylor. The league has specially designed uniforms that honor and demand justice for women who "have been the forgotten victims of police brutality and racial violence," according to a news release by the league.

Warm-up shirts worn by WNBA players will also have the words "Black Lives Matter" on the front and "Say Her Name" alongside Taylor's name on the back.

The WNBA season is set to kick off on July 25.